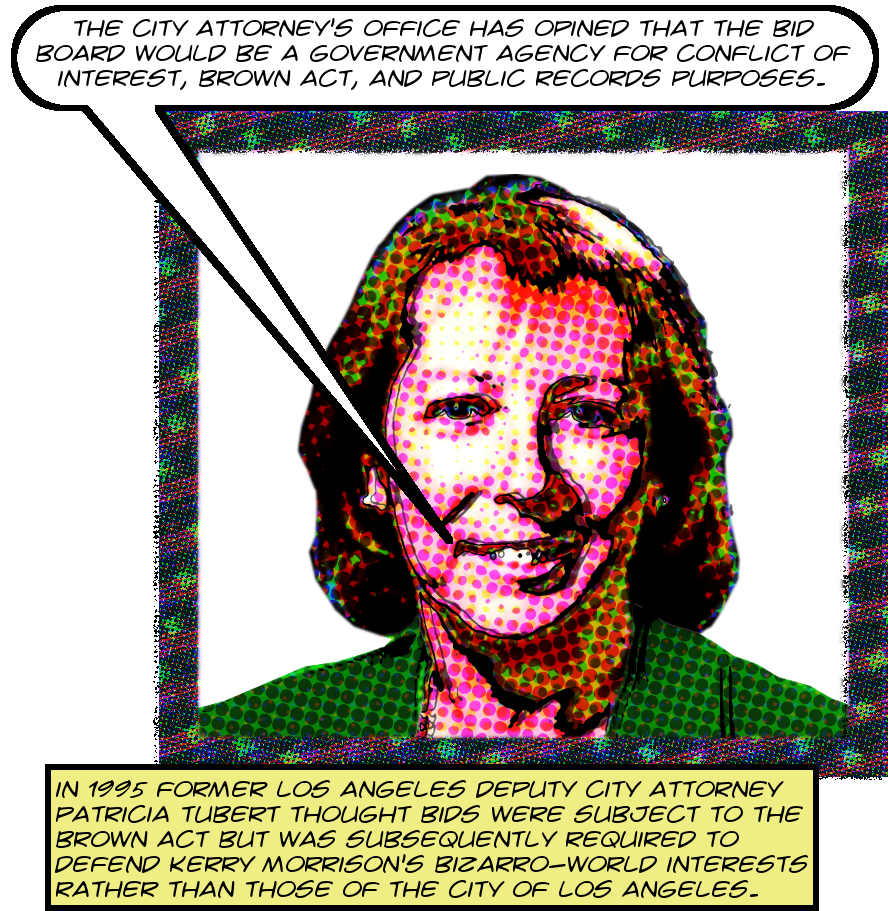 At this late date and because the attorney client privilege between the City and the City Attorney is doubtlessly implicated, we are probably never going to know for sure why they made the obviously wrong decision to defend an indefensible position. But if they were thinking about Kerry Morrison and her weirdo schemes back then like they are now, and why wouldn’t they have been, they wouldn’t have needed any more of a reason beyond Kerry Morrison’s request. Shameful. And harmful. But not a surprise. Turn the page for selected transcriptions.
END_OF_DOCUMENT_TOKEN_TO_BE_REPLACED 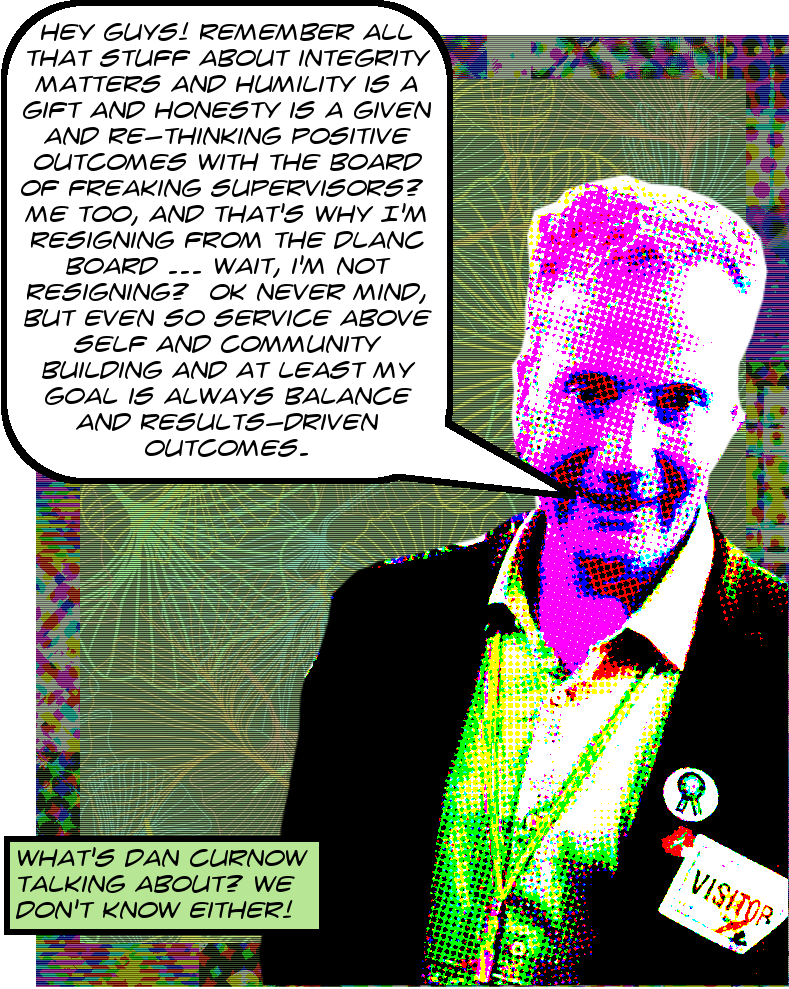 First of all, then, I sent this complaint about him to the Public Integrity Division of the Los Angeles County District Attorney, which is charged with enforcing Brown Act compliance in L.A. There’s not a whole lot of information in there which wasn’t in my original story, but maybe you’ll find it worth reading. The bigger news, though, is that I also filed a grievance with DLANC against Dan Curnow for violating the Brown Act. This is a new direction for me, and there’s a detailed discussion of the issues after the break.
END_OF_DOCUMENT_TOKEN_TO_BE_REPLACED 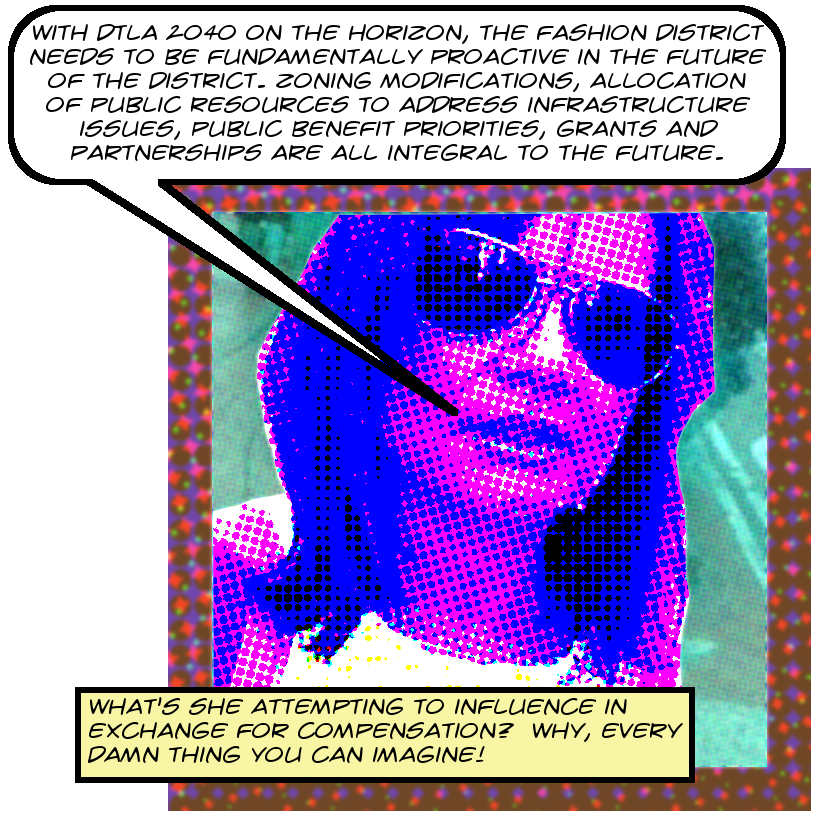 Consequently I’ve been working on expanding my unregistered lobbyist reporting project to BID staff as well. I kicked off the modern era of this project4 today by filing a complaint against Rena Leddy, executive directrix of the Fashion District BID, for failing to register and also for violating conflict of interest laws. You can read the whole complaint if you wish, and there’s a detailed discussion after the break.5 END_OF_DOCUMENT_TOKEN_TO_BE_REPLACED 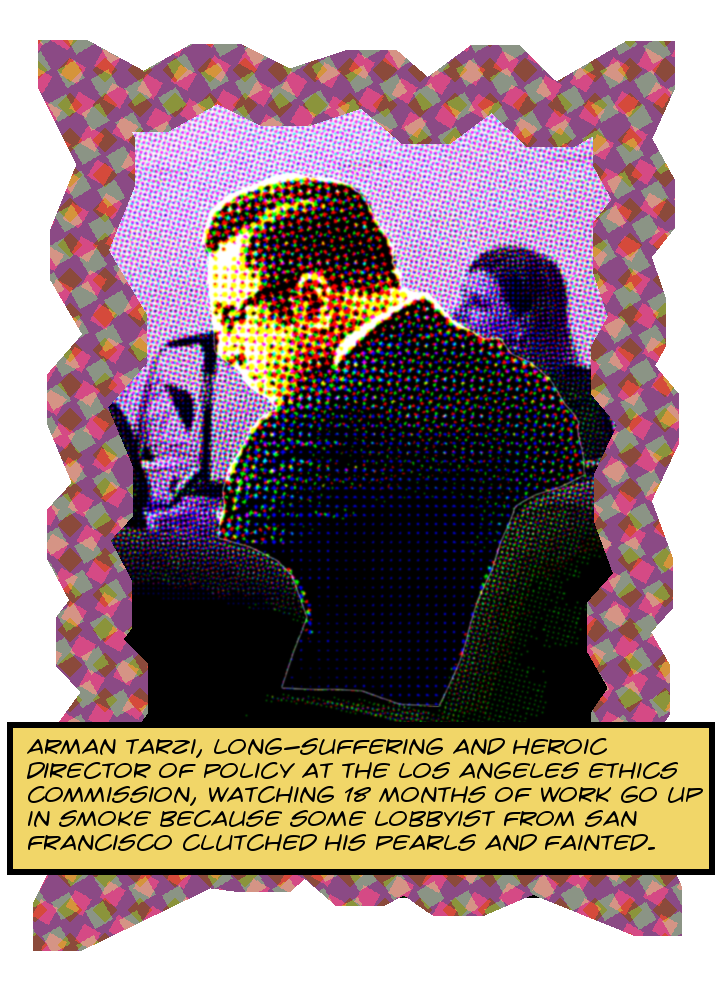 And read on for a description of the proposal and reasons to support it!
END_OF_DOCUMENT_TOKEN_TO_BE_REPLACED

If you want to skip the explaining and go straight to the complaint, here it is.

Friends, take a look at the exceedingly fascinating LAMC § 48.04(B). This lovely little slab of ethicalliciousness illegalizes any occasion when a lobbyist might:

Fraudulently deceive or attempt to deceive any City official with regard to any material fact pertinent to any pending or proposed municipal legislation.

And of course, you recall what a lobbyist is, it’s a technical term in this setting.1 Lobbyists are defined in LAMC §48.02 to be:

Well, as you may recall, I spent the last two months assembling a highly detailed argument that Tara Devine met this definition. If that’s right, and I certainly think that it is, she’s also forbidden from fraudulently deceiving Mike Bonin, e.g., about material facts in regard to the formation of the Venice Beach BID which, as I’m sure you know, requires legislation for the BID to be brought into existence.

The argument is that she got everyone to believe that it was required under state law to include commercially zoned properties in the BID, even though not only is this not true, not only did she know it was not true, but her having convinced everyone of this led to more properties being in the BID, which increased the amount of money under the control of her clients, the Venice Beach Property Owners Association. If you’re still interested enough to follow me into the weeds, turn the page!
END_OF_DOCUMENT_TOKEN_TO_BE_REPLACED

I’ve written before on how the City of Los Angeles arranges for itself to be lobbied by BIDs for various reasons. Now it appears that even this usual arrangement wasn’t enough for Mike Bonin and Debbie Dyner Harris at CD11 with respect to the Venice Beach BID. In particular, during the formation process, in December 2015, Dyner Harris emailed Miranda Paster asking if she could have a voting seat on the BID Board of Directors:

Hi Miranda, how are you? I hope all is well. I am checking on something we had discussed a while ago, but I can’t find in my notes. I wanted to confirm whether or not the City, as 1/3 paying member of the BID,1 is allowed to be a voting member on the BID board.

We opt out of sitting on the Board because it may appear to be a conflict of interest. We can sign the petition for a BID and we cast a ballot for the Prop 218 balloting. However, we do not sit on the boards and vote.

Debbie Dyner Harris doesn’t like this at all. She evidently really wants to be on this board!2 END_OF_DOCUMENT_TOKEN_TO_BE_REPLACED