I reported last December that court filings suggested that Lavan case was likely to be close to settlement (see here for a summary of the issues involved). A Report on the Status of the Settlement Process that hit PACER just now gives more detail. In particular, the settlement agreement is scheduled for the Claims Board on April 11 and is likely to come before the full City Council by the end of April. Get the PDF here or read the important part after the break. You read it here first!
END_OF_DOCUMENT_TOKEN_TO_BE_REPLACED

(I apologize in advance for this necessarily data-heavy post, but it’s essential information).

Here’s how I calculated these figures: That year the LAPD made 14,838 arrests of homeless people2 whereas the Andrews International BID Patrol made 1,096 arrests.3 Reading through A/I’s 2013 arrest reports and examining A/I’s 2013 arrest photos I see no reason to believe that the BID Patrol arrested non-homeless people in 2013 in any significant number.4 END_OF_DOCUMENT_TOKEN_TO_BE_REPLACED

According to an order that just hit PACER, the parties in the LA Catholic Worker and LA Community Action Network suit against the Central City East Association and the City of Los Angeles are meeting on April 5 to discuss settling the case. You may recall that a hearing on an application for contempt was already set for that date. According to Magistrate Judge Andrew J. Wisterich, who’s handling discovery matters in the case, and whose order postponed the hearing:

The court has been informed that a settlement conference has been scheduled for April 5, 2016, at 9:30 a.m. To allow the parties to devote their full attention to exploring the possibility of settlement, the hearing is continued to May 4, 2016, at 11:00 a.m.

That’s all we know!

Longtime readers of this blog will recall that one of my very first successful CPRA requests of the HPOA yielded a bunch of emails between AI and the HPOA from October 1, 2014 through November 12, 2014. In fact there were 69 of them during this 43 day period, or more than 1.5 per day. There’s no reason that this period wouldn’t be representative, so we might expect over 500 emails total for 2014. However, I didn’t get around to asking for the rest of the 2014 emails until November of last year and didn’t receive them until January of this year. They are available here, all (only) 90 pages of them. Incredibly, HPOA supplied more distinct emails from October 1, 2014 through November 12, 2014 than they did for all the rest of 2014 when asked a year later. Statistically, therefore, it’s almost certain that they deleted a bunch of stuff. They handed over significantly more emails from 2015, almost 9 MB of them. In all cases there’s demonstrably material missing, e.g. only a small fraction of the weekly reports from AI are present. It wasn’t clear at all what was going on, although I certainly had my suspicions, until a few things happened:
END_OF_DOCUMENT_TOKEN_TO_BE_REPLACED 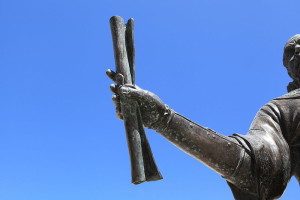 Here are a bunch of documents that I published on The Archive this morning. There’s some interesting stuff in there as well as the usual boatloads of chaff:

END_OF_DOCUMENT_TOKEN_TO_BE_REPLACED

On Monday, March 21, 2016, there was a hearing on the plaintiffs’ application to have the City of Los Angeles held in contempt for its failure to comply with discovery orders in the ongoing lawsuit against the City and the CCEA over the illegal confiscation of the property of homeless people. Recall that the plaintiffs asked the Judge to award them more than $40,000 in fees and to declare that the City was at fault as a punitive measure.

Well, the order resulting from that hearing just hit PACER, and the plaintiffs got some but not all of what they asked for. In particular, they were awarded $38,818.49 in fees. Judgement on the rest of the plaintiffs’ requests was deferred. There will be another hearing on April 5, 2016, at 10:30 a.m. in in Courtroom 690 of the Roybal Building, presumably after which the rest of the matters will be decided. According to the order, by 48 hours in advance of the hearing,

The City is directed to complete its production, serve supplemental responses to the requests for production, respond in writing to the questions asked in plaintiffs’ March 15, 2016 letter from Myers to Whitaker, serve a complete and detailed privilege log, file and serve a report describing the status of its compliance with this and other court orders, and pay the sanctions awarded by this order…

And there are more selections after the break.
END_OF_DOCUMENT_TOKEN_TO_BE_REPLACED

Watch and listen to LAPD Captain Cory Palka speaking at the most recent meeting of the Board of Directors of the Hollywood Property Owners Alliance. Captain Cory recently replaced the now transferred Peter Zarcone as Hollywood honcho, and evidently a good-will-drop-in mission to the local zillionaire’s club is de rigueur in that situation.

You can read a transcript of the ongoings after the break, as always, but today we’re focusing just on a little bit of unplanned, unscripted joking around, for in such situations, according to Sigmund Freud (as our friends at Wikipedia put it), we can discern “…forbidden thoughts and feelings that the conscious mind usually suppresse[s] in deference to society.”


The fun began when Kerry Morrison, her inimitably sycophantic affect in full flower, told Cpt. Cory that she had a surprise for him! (This bit starts here).

KM: I have one fun thing to show you. When you were here, I remember you said “Ooooh! I really want one of those star placques!” So I made this up for you for 2013–2014 and then I kept texting, like I want to go down and tour 77th Division.

And Cowboy Cory Palka has a little joke about this:
CP: You don’t want to go to 77th…

So really, what’s so funny? There’s no clue in Cpt. Cory’s follow-up remarks, either, although we do get the sense that he almost talked about, just barely refrained from mentioning, the dreaded “those people”:

Totally different environment. My first year in 77th Street I had fifty murders and then last year I had thirty three. And I remember, I was telling my daughter we were doing some great things down there, and she was like “Great things? Man, pretty dangerous down there.” And I had ten when I left this year, so, Pete still has ten, I haven’t had any, I’ve been here, this is my second week, so, it’s just a different community and with a whole different set of challenges. Um, that’s a whole different discussion, so…

Very smart, very wise folks have been trying to decipher this kind of coded lingo forever now (as well as some very smart, not-so-very wise ones). There are whole academic departments in our finest universities filled with scholars who spend entire careers trying to explain what these people mean when they say stuff like this, not to mention why they laugh at it, so we’re probably not going to settle it here today. On the other hand, we do have a few comments, which you can find after the break.
END_OF_DOCUMENT_TOKEN_TO_BE_REPLACED

This is just a very quick note to memorialize tonight’s filing by the plaintiffs in the Los Angeles Catholic Worker and Los Angeles Community Action Network’s suit against the City of Los Angeles and the Central City East Association. Last Wednesday the plaintiffs filed a massive set of declarations and other stuff about ongoing problems with the City’s discovery production in preparation for tomorrow’s hearing (at 10 a.m.) on the plaintiffs’ application to have the City held in contempt. First there is a notice of errata stating that they left part of one exhibit out of the Declaration of Shayla Myers in support of the application for contempt, and then, more interesting, the corrected Exhibit F. Some details after the break.
END_OF_DOCUMENT_TOKEN_TO_BE_REPLACED

Last month I reported that BID Patrol arrests had dropped off precipitously between 2014 and 2015. At that time I didn’t have the final arrest total for 2015, so annualized the figure from November to 666. Yesterday I received the actual figures, and the total number of arrests turns out to be even lower than suspected. The BID Patrol arrested only 606 people in 2015, compared to 1057 in 2015 (and a running average of 1183 between 2009 and 2014.1 As I said before, it’s hard not to attribute this massive drop-off to our scrutiny.2 Note that the standard deviation for those years is 107.7, so that the absolute change of 451 arrests is 4.18 standard deviations, meaning that this result is exceedingly unlikely to be due to chance. I also really have to wonder, if they can arrest over 40% fewer people year over year,3 what were they even arresting them all for in the first place?
END_OF_DOCUMENT_TOKEN_TO_BE_REPLACED

On Wednesday the plaintiffs in the LACW/LACAN lawsuit against the City of Los Angeles and the Central City East Association filed materials in support of their application for contempt and sanctions against the City of Los Angeles, who, they claim, is not producing discovery materials according to the already-much-extended schedule. Tonight the City filed two documents in response: A declaration of Ronald Whitaker, who’s the Assistant City Attorney handling the case for the City, and a declaration of LeShon Frierson, who is a senior system analyst with the LAPD, and is the Person Most Knowledgeable (PMK) regarding the LAPD’s email systems.
END_OF_DOCUMENT_TOKEN_TO_BE_REPLACED