Arrests for public urination/defecation are a fundamental tool in the war against homeless people in Los Angeles, as well as being a major part of the BID Patrol’s work in Hollywood. In 2015, for instance, the BID’s data shows that about 8%1 of the arrests that Andrews International made across the two HPOA BIDs2 were for public urination/defecation, which is a violation of LAMC 41.47.2.

When the City Council passed LAMC 41.47.2 in 2003, they were roundly (and rightly) criticized by advocates for the rights of homeless people, who pointed out that it was inhumane to criminalize an activity that is necessary to sustain life without providing a practical alternative. My colleagues have written before about how Councilmembers responded to this by promising informally that it wouldn’t be enforced if there were no nearby public restrooms and by promising to install more public restrooms around the City. However, they failed to amend the actual statute, which has led to widespread abuse.3 And 13 years later there aren’t significantly more public restrooms.

However, there is another part of the public urination law, LAMC 41.47.1, which is never even mentioned in discussions of the issue, and yet it is not only relevant, but radically, transformatively relevant. It was adopted by the Council in 1988 and says:

This has the potential to change the entire conversation about public restrooms, public urination, and homelessness in Los Angeles.

And what will happen if they don’t let you use their bathroom? Well, this code section doesn’t specify what the consequences of violating it are. This is apparently a common trope in legislative circles, and the standard move is to have a default that applies to all sections unless specifically overruled. In the case of the Los Angeles Municipal Code this default is found in LAMC 11.00(m), which states in pertinent part:

The code section doesn’t say that a violation is an infraction, so violating it is a misdemeanor. They’re actually committing a misdemeanor if they don’t let you use the bathroom after you tell them that you have a physical infirmity. And what can happen if they commit that misdemeanor? The same code section lays that out as well:

As hard as it is to believe, then, it is true. If you go into a restaurant or any other establishment that’s open to the public, tell them that you have an infirmity and you have to use the bathroom immediately, and they don’t let you, they can go to jail for six months. Not that they would, or even that they should, but the mere fact that they could is astonishing.

When all this became clear to me, I immediately fired off a public records request to Mike Dundas of the LA City Attorney’s office asking for a list of all prosecutions for violations of LAMC 41.47.1. It turned out, according to Mike, that in the 28 years since this law was passed, there have been precisely zero prosecutions. It’s not feasible to find out how many arrests there’ve been, but Mike’s data includes rejected prosecutions, so it’s probably safe to say there have also been zero arrests.5

Clearly this law would be violated innumerable times if anyone had ever heard of it. So actually, the entire bathroom problem in LA could be solved immediately with just a little education and maybe a little enforcement. Not just for homeless people, either, but for tourists and residents as well. We don’t have to wait until the City builds public restrooms. We don’t have to wait for anything. All we have to do is to inform the homeless, the tourists, the residents, of their rights and inform people in charge of facilities open to the public of their duties.

And the Hollywood Property Owners Alliance is famous for its educational campaigns. At one time or another they’ve tried to get people to stop giving money to panhandlers, to stop giving money to street characters, and so on. They print pamphlets and signs. They set up web pages. They claim to educate homeless people about alcohol abuse services rather than arresting them for drinking in public. They tell homeless people about the Greater West Hollywood Food Coalition and other social service providers. Why not also give them pamphlets explaining their rights under LAMC 41.47.1? Why not, in fact, inform them that they have the right to use the bathroom in HPOA headquarters at 6562 Hollywood Boulevard? In fact, every BID office is probably subject to this law.6 Why don’t the BIDs put some of their effort into spreading the word?7 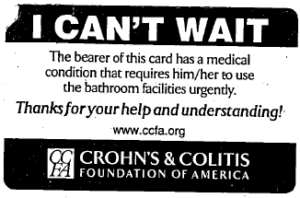 Obviously an education campaign and a commitment by the City to take this law seriously would generate significant backlash. But I think it’s too cynical to assume that the zillionaires would win the ensuing battle. There are actually mainstream political advocacy groups that have successfully pushed for these kinds of laws across the country and would clearly fight the repeal of this one. For instance, the Crohn’s and Colitis Foundation of America provides “I can’t wait” cards to its members, and evidently at least 12 states have some form of bathroom access legislation. I haven’t been able to find out how many cities do. The point is, though, that it won’t be easy to change this law because it’s not just homeless people and their advocates who would defend it. It certainly seems like a strategy that’s worth a try.

Image of restaurant window is ©2016 MichaelKohlhaas.org.