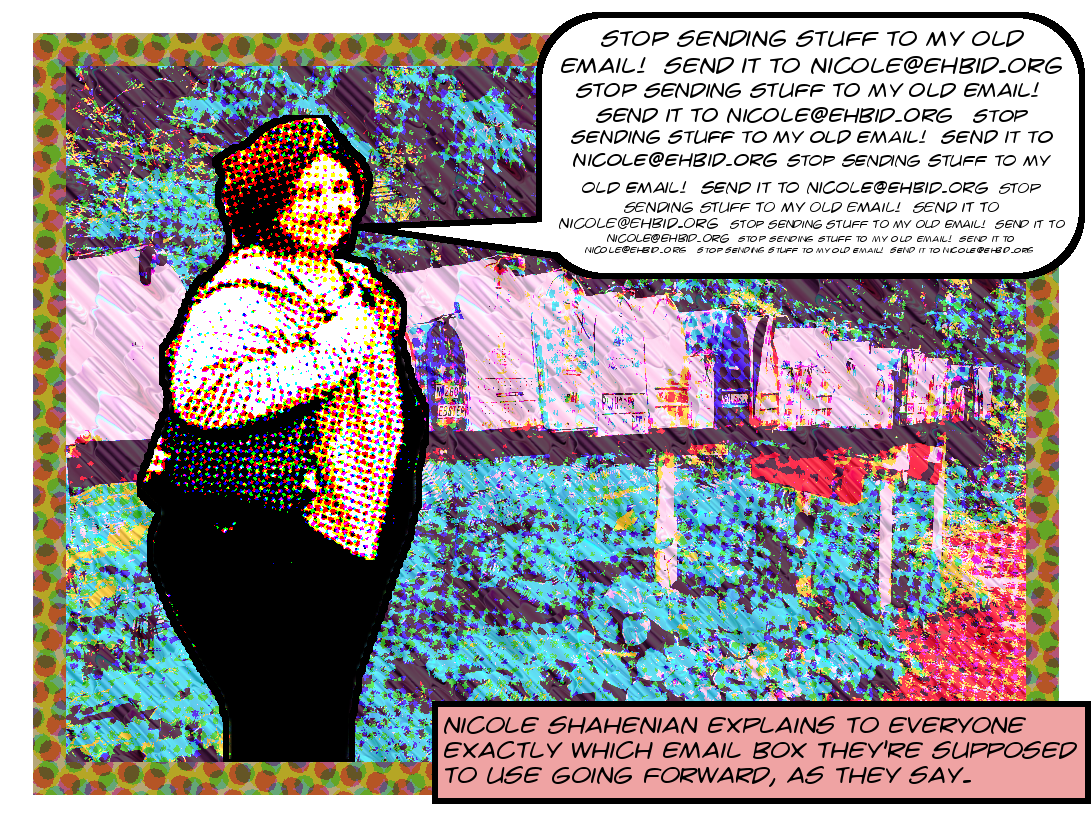 Ah, friends, just another desultory announcement of yet another batch of public records obtained from our friends at the BIDs, the meaning of none of which is yet clear, but we don’t let that worry us here in MK-dot-Org-landia. Everything happens for a reason, as they say, and I’m sure all this junk is no exception and some day it will prove to comprise crucially important pieces in puzzles whose very existence is as yet undiscerned. But for now I’m just announcing its existence, and do with it what you will. Anyway, here’s what I got:

And turn the page for the rest of the junk and more random commentary!
END_OF_DOCUMENT_TOKEN_TO_BE_REPLACED

This evening I’m pleased to present the third installment in our ongoing LAMC 49.5.5(A) project, in which we report various City employees to the Ethics Commission in an attempt to discover exactly what the most fascinating ordinance ever,1 LAMC 49.5.5(A), actually prohibits. It says:

Now, if you’ve been following the saga of Bryan Kim and Aram Taslagyan here on this blog,2 you’ll have noted these essential elements of the story:
END_OF_DOCUMENT_TOKEN_TO_BE_REPLACED

Last Summer it occurred to me that it should be possible to use the California Public Records Act to get advance notice of City of LA homeless encampment cleanup actions. After an inordinate amount of bitching and moaning on my part, three weeks ago they actually handed over a schedule one day in advance. Since then, though, the person who gave me that record has been removed from my case1 and the new person assigned to it, Veretta Everheart, Senior Management Analyst with the Department of Public Works, is as obstructionist as everyone else I’ve dealt with at LA Sanitation (although perfectly friendly and delightful to deal with). In other words, no new advance schedules have been forthcoming.

On a slightly hopeful note, though, Veretta Everheart did actually tell me explicitly that they weren’t going to give me advance schedules.2 The reason she gave is that they “are living documents” which are “not retained.”3 Although she doesn’t say so explicitly, this is evidently a nod in the direction of an exemption enumerated in CPRA at Section 6254(a), which states that it’s not required to release 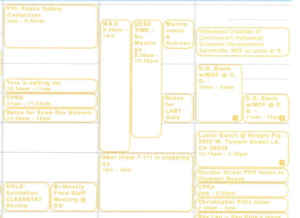 This is just a quick post to announce the availability of tons of new records (with more to come this weekend, I hope!) These are available both on Archive.Org and locally through the menu structure above or directly from our document storage.

There’s a list of the new stuff after the break.
END_OF_DOCUMENT_TOKEN_TO_BE_REPLACED

This is just a brief episode from the saga of the cat-kicking K-Town slumlord Bryan Kim and his unholy compact with Mitch O’Farrell’s office to trade lunch money for homeless encampment clean-ups. It seems that on March 11, 2016, while Bryan Kim was still negotiating the terms of his on-demand encampment clean-up with CD13 staff, he asked CD13 scheduler David Cano for a meet with the CM himself, Mitch O’Farrell, in the first of this series of emails:

As discussed, I’d would [sic] like to request to meet with Councilmember O’Farrell re:The Homeless Encampment issue near LA City College to see how we can collectively work together on short term and sustainable permanent solution.

END_OF_DOCUMENT_TOKEN_TO_BE_REPLACED

I wrote some time ago about how CD13 staffer Aram Taslagyan organized an on-demand homeless encampment clean-up at the behest of scumbag cat-kicking Koreatown slumlord Bryan Kim, who needed it done really really fast because he had some kind of inspection forthcoming. Well, yesterday,1 I managed to get copies of some new emails between Bryan Kim and various CD13 staffies on the subject.2 In particular, on March 27, 2016, Bryan Kim wrote to CD13 District Director Marisol Rodriguez3 under the subject Recognizing Aram Taslagyan, stating e.g. that4
Aram did a great job demonstrating professional excellence and swiftly took comprehensive action to utilize his alliance with other groups such as LAPD, Sherrif, groups among others. I applaud his great effort for taking care (completely clearing all homeless encampment issues.

And what are Bryan Kim’s hopes for the future?

As of 4 days later there has still been no recurrence of them revisiting on Vermont and Marathon.

We hope to continue vigilant and collective efforts as I am in contact with Braille, LACC, local and community patrons to closely monitor any future outbreak, for which I will let Aram and lapd know.


Because as everyone who’s involved with “quality of life” knows, both homeless people and zombies arrive in “outbreaks.” Let’s hope we don’t have any more! And what is he asking Marisol Rodriguez to do?
END_OF_DOCUMENT_TOKEN_TO_BE_REPLACED

How does the City of Los Angeles decide which homeless encampments to target for cleanup? How do they decide when to target them? Well, if these two email chains from City Council District 13 about encampment-breaking on Vermont Avenue and Marathon Street in Koreatown are any indication (one and two) they target them when non-homeless people call CD13 and tell them to clean out the homeless people.1 And what do they get out of targeting them? Well, they’re politically savvy enough to turn down free lunches offered in exchange for their dirty work, but they will accept an offer of bused-in political supporters to astroturf the public comments section of a Council meeting. First let’s look at the players involved.

Bryan Kim is a partner in Koreatown based property management company Kim and Casey, which doesn’t seem to have a website.2 They do, however, have a Yelp page. This is notable for having uniformly one star reviews, which include comments like:3
They would tell me I was picky about the filth they’d promised to clean up before I moved in but never took care of it. They wouldn’t accept responsibility and blamed everyone and everything else until they were legally forced to take control of the growing sludge and cesspool that had been forming for I don’t know how many weeks .

Or, even more colorfully:

I had my sink drain burst and when I asked them to fix it they said “NO”. The reason they gave me was that I had a bathroom sink to use and I dint really need the one in my kitchen. … What kind of management company is this? Also, one day as I was looking out my window, I saw one of the three guys who were walking the property from Kim and Casey Kick my neighbors cat at he was walking down the path way. It was the middle aged guy of the three that were walking the property. I don’t know his name and don’t care to know such a scumbag.

So that’s Bryan Kim according to Yelp; K-Town slumlord and associate of cat-kickers if not a cat-kicker himself. The other correspondent is CD13 field deputy Aram Taslagyan, whose bio you can read for yourself. The whole thing evidently began with a disconnected phone call from Kim to CD13 intern Sean Starkey, which resulted in this email:
END_OF_DOCUMENT_TOKEN_TO_BE_REPLACED