Late last year famous local historians and operators of Esotouric Tours Kim Cooper and Richard Schave drew my attention to a collection of more than a million historic crime photos held in the LAPD archives and dating back to the 1920s. In 2001 the LAPD allowed the owners of the Fototeka Gallery to access these photos, copy them, and exhibit and sell prints for outrageously high prices.

The gallery owners also published and sold a book of selected images.1 Since then, though, the LAPD hadn’t let anyone else look at the pictures. Kim and Richard were lamenting the tragic fact that such important historical material had been cherry-picked by so few individuals, when there are many historians whose work would be enhanced by access – and by extension enhancing Angelenos’ understanding of our city.2 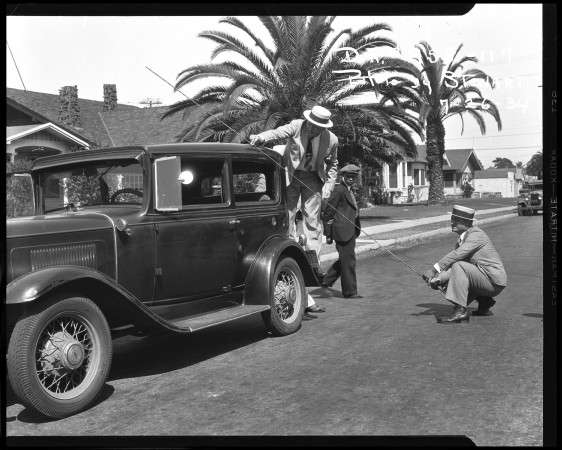 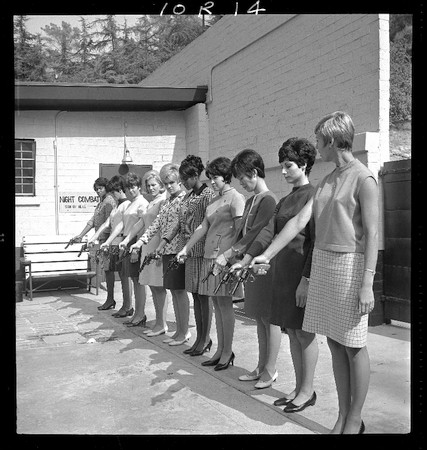 And that is really an understatement. Just look at the few examples scattered around this post, which I took from Fototeka’s site. There is an image from an LAPD men’s room spy camera, a picture of the Black Panther Party Headquarters after the shootout, a man apparently arrested for crossdressing, old buildings, many possibly unintentionally artistic closeups. An unimaginable variety.

These pictures could potentially give unprecedented insight into the LAPD’s past treatment of people of color, of LGBTQ people, gender noncomformists, and so on. Architecture, design, daily life. There is no limit to the public interest in seeing these images, in opening up this whole collection to the public. It is appalling that they’re not available to everyone. 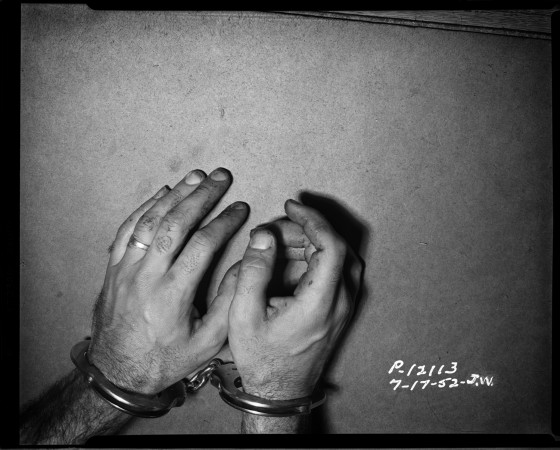 Now, the California Public Records Act is very, very clear that photographs are public records.3 And it’s also very clear that once a public record has been released to one member of the public it can no longer be withheld from any member of the public.4 Clearly, then, I thought, we are going to get access to these photos! So I submitted a request through the City’s NextRequest platform.

Now, the LAPD is famous for its idiotic denials, and their first response was consistent with their reputation. They told me that I couldn’t have them because they are investigative materials and therefore exempt under §6254(f).5 So I told them about the fact that a release to anyone constitutes a waiver and asked them to change their mind. 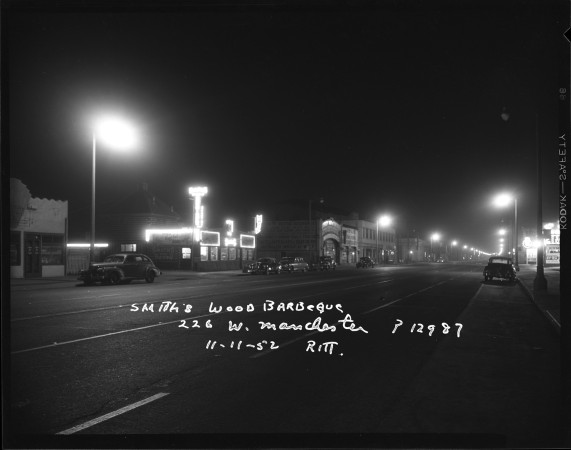 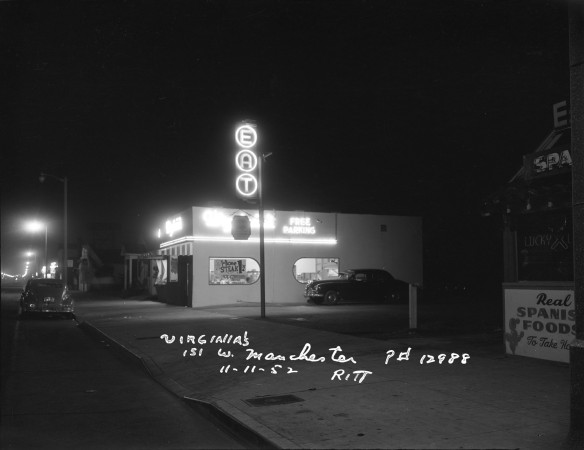 They ignored me, as they are wont to do, so I wrote to the City Attorney and asked again. And they also ignored me. So I contacted the incomparable attorney Anna von Herrmann and asked her what she thought. And what she thought was that we should file a petition to force the City to release the photos. And that’s what we did, and here is a copy for you! Read on for some selections.
END_OF_DOCUMENT_TOKEN_TO_BE_REPLACED

If you’re familiar with the BID Patrol situation in Hollywood you’ll have noticed that not only do BID Patrol officers dress like cops, but they do not wear name tags of any kind. No one seems to be willing to say why this is. Well, long-time readers of this blog will recall that in September 2015 I announced that I was taking on the task of identifying BID Patrol officers.
In October 2015 I made an exploratory request, asking Kerry Morrison for:

I phrased it in this awkward manner because it’s a quirk of CPRA that agencies have to hand over records but they don’t have to answer questions about them. On November 10, 2015, Kerry Morrison responded with the photo shown here. She told me that Robert E. Reyes, badge #117, was the man on the left. So far, so good. At this point I actually thought I would be able to identify BID Patrol officers via CPRA. But, as you’ll see after the break, ’twas not to be.
END_OF_DOCUMENT_TOKEN_TO_BE_REPLACED

A little more than two weeks ago, we reported that, despite the fact that someone, probably the HPOA, had posted a bunch of signs to the contrary, Selma Park, at the corner of Selma Avenue and Schrader Blvd., was, according to the LA City Recreation and Parks Commission, actually open to all people, including adults without children in their care. At the time he received this information from RAP, our correspondent told the commission about the signs and the arrests and asked if they could remove the signs. He never heard back, but when walking by this afternoon, he was pleased to note that the signs were gone. So, he tells us, he sat in the park for an hour reading and also took some pictures!
Now, this is a very good thing. And we look forward to many fine hours eating lunch in the park and playing checkers on the super-cool built-in tile boards on the picnic tables.

“But,” as the man said, “let judgment run down as waters, and righteousness as a mighty stream.” There are four issues left unresolved here:
END_OF_DOCUMENT_TOKEN_TO_BE_REPLACED

We recently had occasion to write about the HPOA’s continent-spanning conspiracy with a bunch of their creepy counterparts in Manhattan to abuse intellectual property law, to violate California Penal Code §158, to constructively violate the first amendment, and both stridently and characteristically to act the fool with respect to the burning issue of street characters.
Since last we examined this issue, the NYPD has gone nuclear by asking Disney and Marvel to sue the street characters, something which those companies seem to have proved unwilling to do. Of course, what the city and the local BIDs really don’t like is the naked ladies. Some of the information we were missing then we’ve obtained now. First, you will recall that in a finger-down-throat-fawning set of emails Kerry Morrison advised Tom Cusick, the dude who’s her counterpart at the Fifth Avenue BID, that they hadn’t had much luck with their criminal attempts to incite litigation against street characters. She mentioned to Tom, though, that the HPOA had managed to get Sesame Street to send cease and desist letters to Big Bird and Elmo one time under special circumstances. We now have copies of those letters. Read on for analysis.
END_OF_DOCUMENT_TOKEN_TO_BE_REPLACED

On June 22, 2009, Cameron Diaz got a star on the Boulevard out in front of the Egyptian Theater. Someone, sometwo, or somemany Andrews International Security peeps were there, snapping pictures at a rapid rate of speed.

We’ve heard so darn much about the NSA and all the evil stuff they can learn via metadata, so we thought we’d try some of the same moves on this sequence of images, of which we have nine in our possession. Here they are all in a row (click to enlarge), and you can see and get the individual full-sized files after the break:

END_OF_DOCUMENT_TOKEN_TO_BE_REPLACED 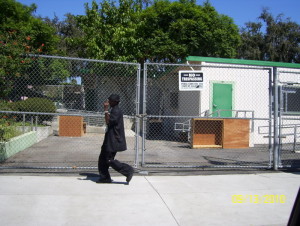 I am pleased to announce the availability of about 1.3 GB of images, obtained from the HPOA under the California Public Records Act. The main archive page is here. You can see a listing of the files for individual download here. I rot13-ed the filenames to protect people’s privacy somewhat.1 You can get the whole batch via bittorrent which, as always, is most efficient if you want local copies of these pictures. I’ll be organizing these into thematic PDF flip-books and publishing them at the Archive and on Amazon over the next few weeks, but as it may be a while I thought I’d make the raw images available now.

Image of man explaining democracy to the BID Patrol is a public record. 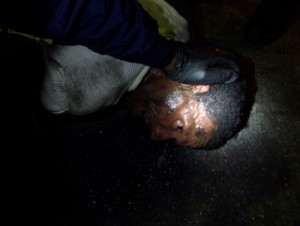 I am pleased to announce the availability of about 4GB of images, obtained from the HPOA under the California Public Records Act. The main archive page is here. You can see a listing of the files for individual download here. I rot13-ed the filenames to protect people’s privacy somewhat.1 You can get the whole batch via bittorrent which, as always, is most efficient if you want local copies of these pictures. I’ll be organizing these into thematic PDF flip-books and publishing them at the Archive and on Amazon over the next couple weeks, but as it may be a while I thought I’d make the raw images available now.

Image of beaten-up man is a public record. 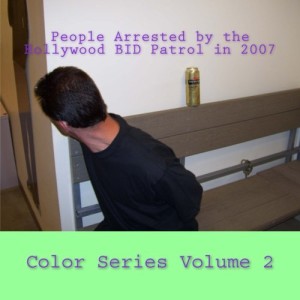 I am pleased to announce the availability on Amazon of a four volume set of pictures of people arrested by the Andrews International BID Patrol in 2007. I set it up in both color and in black and white, since the color printing makes for a high price. As always, free PDFs of the books are available as well and, as always, these are sold at cost. These images are part of a much larger image dump which you can get from archive.org here. This is useful as it allows you to get the complete 4.7G of images via bittorrent, which is far more efficient than http for such large amounts of data. In any case, here are links to the books and the free PDFs: