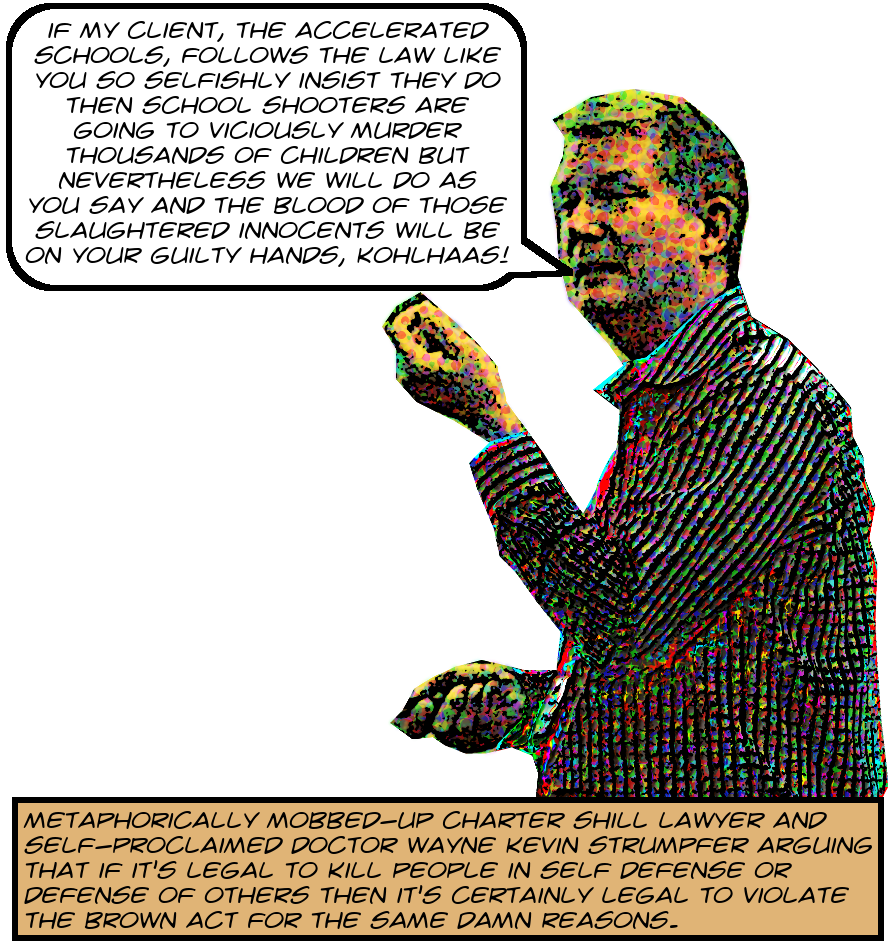 In October 2019, as you may recall, the infamous white savior rogue charter conspiracy known as The Accelerated Schools held a board meeting at which they committed three distinct and shocking violations of California’s quintessential government transparency law, the Brown Act. One of the most appalling of this series of thoroughly appalling transgressions was their requirement that members of the public sign their names to a sheet in order to enter the public meeting.

This, of course, is explicitly forbidden by the Brown Act at §54953.3.1 TAS attempted to excuse this outlawry by claiming that they weren’t requiring a signature to attend the meeting, but just to enter the school grounds on which the meeting was being held. This is nonsense, of course, but nevertheless typical of the kind of empty technical loopholes that arrogant privileged zillionaires and their minions seem to believe are all it takes for them to evade their legal obligations.2

And so on December 18, 2019, in accordance with the procedures mandated by the Brown Act,3 I sent them a letter demanding that they unconditionally commit never to ever require people to sign in to attend their meetings and informing them that if they didn’t completely obey me within 30 days I was going to file a petition asking a judge to (metaphorically) slap some damn sense into them.

And lo! Just yesterday, TAS’s metaphorically mobbed up lawyer Wayne K. Strumpfer of privatizing powerhouse law firm Young Minney & Corr, who’s basically a liar and enabler of outlawry but evidently knows a losing position when his clients manage to back themselves into one, sent me a letter utterly and abjectly capitulating to my demand!

But before he got around to the utter abjection Dr. Strumpfer went on and on and on explaining to me that The Accelerated Schools actually did nothing wrong, that I pretty much made everything up, that his clients only acted according to the very highest motivations, and that requiring people to sign in to attend meetings is how TAS prevents school shootings! And I guess that that’s working because as far as I know they haven’t had any.

On that subject, it’s interesting that Strumpfer doesn’t say a word about the fact that TAS chooses to have its meetings on school grounds during school hours when schoolchildren are present even after parents have been pleading with the board literally for years to have meetings in the evening so that working people have a chance to attend. One might think that having meetings at times when no kids were around would be a more effective way to protect the kids than having people sign a piece of paper, but admittedly I know nothing whatsoever about whatever kind of eleven dimensional galaxy brain hypercrapola in which these TAS people and their shyster lawyer have earned an average of 2.7 Ph.Ds each.4

In any case Dr. Wayne finally gets around to the actual point, which is that they don’t want to get sued by me so dammit, they concede everything! The only actual concrete effect of this concession5 is that if they ever require people to sign in to their meetings I can sue them without giving them notice or even asking them to stop. Which I totally will do, by the way! So that’s a little victory over the satanic minions of privatization. Read on for a complete transcription of Wayne K. Strumpfer’s jittery little surrender letter!
END_OF_DOCUMENT_TOKEN_TO_BE_REPLACED

We recently had occasion to write about the HPOA’s continent-spanning conspiracy with a bunch of their creepy counterparts in Manhattan to abuse intellectual property law, to violate California Penal Code §158, to constructively violate the first amendment, and both stridently and characteristically to act the fool with respect to the burning issue of street characters.
Since last we examined this issue, the NYPD has gone nuclear by asking Disney and Marvel to sue the street characters, something which those companies seem to have proved unwilling to do. Of course, what the city and the local BIDs really don’t like is the naked ladies. Some of the information we were missing then we’ve obtained now. First, you will recall that in a finger-down-throat-fawning set of emails Kerry Morrison advised Tom Cusick, the dude who’s her counterpart at the Fifth Avenue BID, that they hadn’t had much luck with their criminal attempts to incite litigation against street characters. She mentioned to Tom, though, that the HPOA had managed to get Sesame Street to send cease and desist letters to Big Bird and Elmo one time under special circumstances. We now have copies of those letters. Read on for analysis.
END_OF_DOCUMENT_TOKEN_TO_BE_REPLACED

Stories of the rich and powerful abusing intellectual property laws to stifle free expression, shut down criticism of their terroristic conspiracies against humanity, lock away little old ladies because their grandkids misuse bittorrent, wantonly slaughter cute lil bunnies, and so on, are as common in the tech press as dandelions on the expansive and suspiciously green lawns of Hancock Park before the gardeners show up on Thursday morning.
This post-capitalo-apocalyptic legal technology, the use of which reached its supernova-esque apotheosis earlier this month with the City of Inglewood’s mind-blowingly shenaniganistic attempt to assert copyright in video of city council meetings,1 it turns out was being used by our friends at the Hollywood Property Owners Alliance to try to shut down the by-them-much-reviled street performers in a shameless criminal conspiracy with their aiders and abettors at the the City Attorney’s office and the LAPD as late as last August. Although our bosom BIDdies seem to have met with little success, except, evidently, in the case of Elmo of Sesame Street, their futile attempts are quite telling. Read the actual evidence here and our commentary on them after the break.
END_OF_DOCUMENT_TOKEN_TO_BE_REPLACED