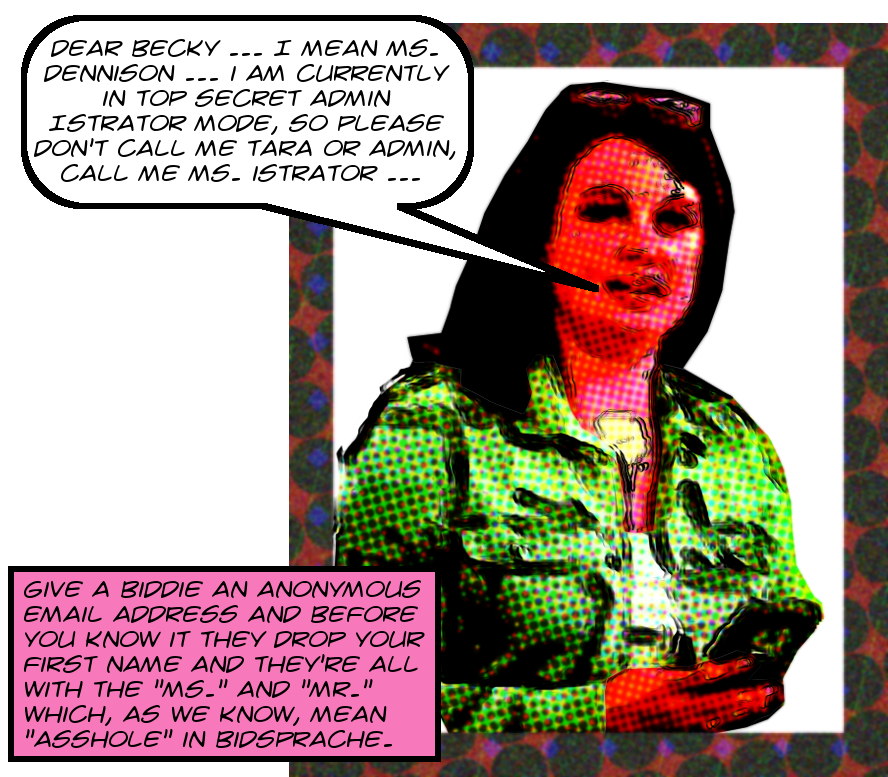 So in April 2018 I had to file a petition against the Venice Beach BID seeking to enforce compliance with the California Public Records Act because they’re so damn obstructionist that they had, at that time, been ignoring my requests for 14 months. Well, a few weeks after my lawyer filed the petition, Tara Devine started producing records1 and recently I received another set, this consisting of 45 emails between Devine and various parties on the subject of the BID’s search for a security provider. The whole set is available here on Archive.Org.

Unfortunately, there’s very little of specific interest here, although not nothing, and the interest is most certainly not nothing. Most importantly, there’s yet more circumstantial evidence that the VBBID engaged in systematic and egregious violations of the Brown Act during 2017. On a more personal level, but still interesting for the insight they yield into the weirdo mindset of BID executive director Tara Devine, there are records here demonstrating the radically different modes of address she uses depending on which email account she’s using to communicate.

It’s also interesting that the ultimately successful bidder for the BID’s security contract, Allied Universal, hired Los Angeles superlobbyists Cerrell to influence the BID’s choicemaking process. Unfortunately the emails contain just enough information to show that this happened while remaining silent on why it happened or how it played out in the selection process. Hopefully further research will shed light on these issues.

And turn the page for links to and transcriptions of specific emails!
END_OF_DOCUMENT_TOKEN_TO_BE_REPLACED

On May 3, 2017 the Department of Neighborhood Empowerment sponsored a hearing on challenges to the Skid Row Neighborhood Council formation election. One of the main issues was, of course, the shadowy anonymous front corporation United Downtown LA and the names of the people behind it.

At that meeting, Patricia Berman, self-proclaimed President for Life of the DLANC board of directors, was moved to deny all knowledge of the matter and to affirm her overwhelming desire to find out who was behind it so she could get them kicked off the board. But don’t take my word for it! You can watch and listen to her, and here’s what she said:

If indeed one of our board members was involved with United DTLA I would love to find out about it, because I bet we could get them off the board really fast. However, I have no idea who these people are. I don’t know anyone on my board who does, and we certainly have asked around. We had nothing to do with this. I’m sorry it caused such a big stink. But the truth is it didn’t come from our listserve and it’s not something that came from us.

Well, of course, as we know now, DLANC board member Estela Lopez was deeply involved with United DTLA and five additional board members were also involved to one degree or another:

Jacob Douglas Van Horn is off the board for reasons that are probably unrelated to United Downtown LA, but the others remain. The most egregious case among these after Estela Lopez herself is Robert Newman, who was not only involved with United Downtown LA but was standing right behind Patti Berman when she made the statement.

She said she asked around, so either she didn’t ask him, which seems unlikely, or he lied to her when she asked him, or she lied when she said no one on her board knows who was behind the situation. None of these options look good for President Patti. However, she can go an awful long way towards washing away her sins by sticking to her promise and getting these five remaining miscreants “…off the board really fast.”

Now, it’s occurred to me that I haven’t written much about how these folks in the intersection between the DLANC board and United DTLA were involved in United DTLA’s shenanigans. Obviously they were all involved to the extent that they were on Estela Lopez’s United DTLA mailing list1 Well, there’s tons of evidence in this set of emails from the Downtown Center BID but it can be fairly hard to sort through. Never fear, though! Turn the page for a play-by-play list of selected involvements of selected creepy DLANCkites, with evidence!
END_OF_DOCUMENT_TOKEN_TO_BE_REPLACED 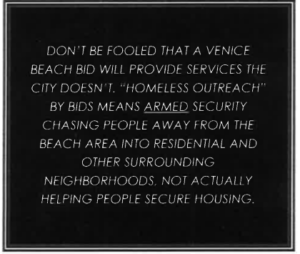 If you’ve been following the story of the Venice Beach BID at all you will know that the first hearing that the City held on this matter was shown to be invalid via some sharp lawyering by superhero public interest attorney Shayla Myers and that subsequently the City had to call a complete do-over of the process. Well, the time for the do-over hearing is rapidly approaching. It will be held at City Hall on Tuesday, November 8, at 10 a.m. If you can fit it in I hope you can show up and voice your opposition.

And your opposition is being heard by the City. For instance, City Clerk Holly Wolcott was recently quoted in the Argonaut to the effect that

… the drama surrounding the Venice Beach BID is unprecedented. “Since I’ve been in office, we’ve never seen the level of turnout we had for the BID nor had a BID ordinance repealed for these reasons,” she said.

Whether or not we’re ultimately successful in preventing this BID1 is less important than to show the City that they can no longer expect that their BID-building shenanigans will unfold unopposed in the quiet of their formerly smoke-filled back rooms. It’s important to show them that what Wolcott thinks is an anomaly may well be the new normal.

Finally, as they have been doing all along, the fine folks at Venice Community Housing are leaders in the anti-BID movement, and they’ve produced and/or distributed some useful information, to which you can find links after the break.
END_OF_DOCUMENT_TOKEN_TO_BE_REPLACED

As tragic as the demise of Venice has been to watch over the last five years or so, it turns out that she still has some life in her. If anyone had asked me five years ago which neighborhood of Los Angeles might successfully oppose a BID, I would have said Venice without even having to think about it. But the last half-decade, what with sociopathic techbros of both sexes in possession of orders of magnitude more money than sense buying every sliver of land in sight and thereby running the prices up into the stratosphere even as they’re hogging the waves with their irremediably Barneyfied GoPro equipped styrofoam surfboards, zillionaires remodeling the canals into a nightmare AirBnB horror show, stupid fucking restaurants that…evidently leave me speechless, all this had driven me into what I thought was an inescapable well of cynical despair with respect to the fate of this dearest of all areas of our City.

Well, tonight the Clerk’s office placed a petition with 169 signatures of Venice residents opposing the formation of a BID there and, just like that, my hope in Venice is restored! They oppose it articulately, wisely, and for all the right reasons, too:

We, the undersigned, oppose the establishment of a Venice Beach Business Improvement District (BID). We believe in public control of public resources and oppose the privatization of those resources. We support renters’ rights, both for residential and commercial renters, and oppose taxation without representation. BIDs impose taxes that renters often pay, but which landlords decide upon. BID private security forces have a track record of infringing on the rights of our lowest-income neighbors, especially those people who are unhoused. We oppose private security fources controlled exclusively by commercial and industrial interests when their impact will affect the entire community, especially those disenfranchised from BID governance.

And it’s worth reading the cover sheet, too, which is signed by a number of right-thinking organizations and lays out a spot-on general anti-BID theory in the highly specific context of opposing this BID. You can read it here and there’s a transcription after the break:
END_OF_DOCUMENT_TOKEN_TO_BE_REPLACED