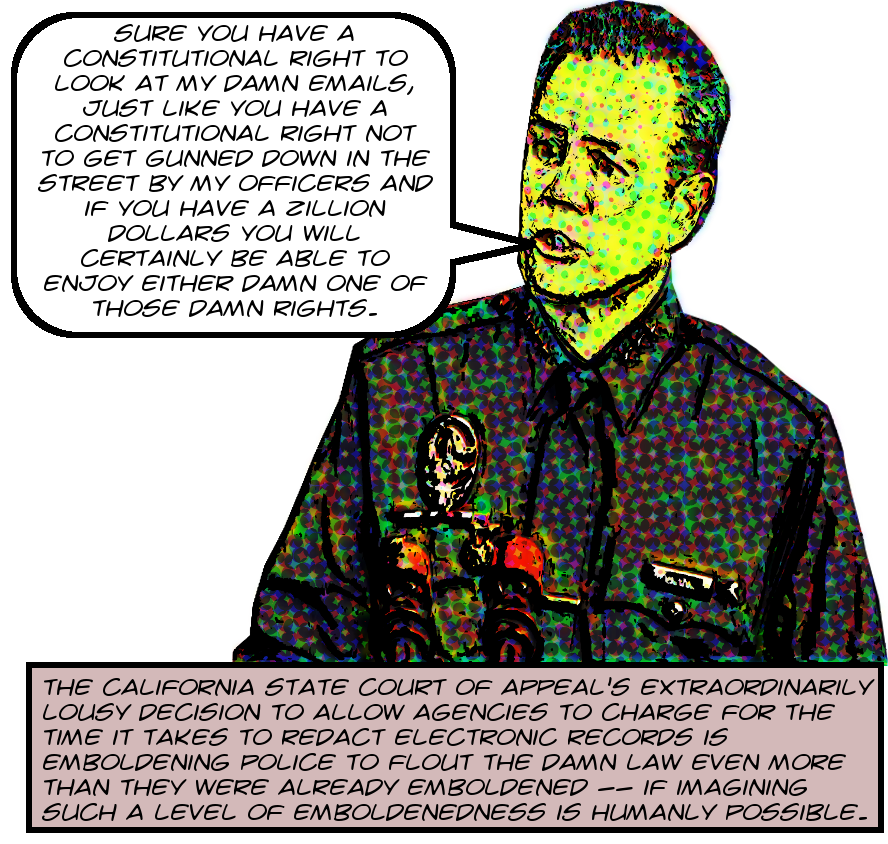 Don’t know if you’re aware, but in September 2018 the California Court of Appeal held that local agencies could charge CPRA requesters for staff time for redacting electronic records. In particular, the City of Hayward charged the National Lawyers Guild more than $3,000 to redact some parts of bodycam videos. It’s well-established for paper records that agencies must allow inspection at no cost and if copies are requested, can charge only the direct cost of copying.

The Court of Appeals based its opinion on the CPRA’s much-abused §6253.9(b)(2) which states that an agency can charge a requester for the bare privilege of inspecting a record under a small set of very specific circumstances:

The court’s reasoning was that redaction of a video constitutes extraction required to produce the record. Sane people can see, however, that the video already exists. Nothing is required to produce it. This section is talking about e.g. running queries against databases, where the requester only wants certain information and the results of the query constitute a new record that “would require data compilation, extraction, or programming to produce.”

And as you can imagine, after this opinion was published, obstructionist anti-CPRA lawyers all over the state started drooling on their pillows in glee. For instance, Carol Humiston, the soon-to-be-disbarred Rasputinian ear-whisperer to transparency-averse business improvement districts all over Los Angeles, advised her clients on the basis of this decision to assert that if I wanted to see any more of their damn emails I would have to pay for them to buy Adobe Pro so that they could redact them.

She backed off on this outlandish claim after I pointed out repeatedly that emails weren’t found in the wild as PDFs so that there was no case to be made for purchasing an expensive PDF editor to do a job that the built-in text editors that come with every computer operating system could do better. However, the LAPD also glommed onto this case, and the City Attorney’s office began theorizing madly, and now if you submit a request to LAPD for emails through NextRequest you’re met with an aggressive notice warning you that you’re going to pay and pay and pay unless you withdraw your request right now, and the notice explicitly cites the case.

So yeah, this opinion sucks and sucks big time, and it doesn’t just suck in theory, it’s actively sucking in practice even now as I write these very words. But at least it was appealed to the California Supreme Court. And at least the Supreme Court agreed to hear it. And papers have been filed, but it turns out to be really hard to get pleadings out of the Supreme Court.

But recently I was lucky enough to obtain a couple of interesting items. Here’s an amicus letter from a coalition of public interest law firms and activist organizations explaining the harm that the decision is doing. And here’s the opening brief, which explains in well-reasoned and exceedinly convincing terms why the Court should reverse this extraordinarily bad appellate decision. Both are fabulously worth reading, and there’s a transcription of the amicus letter after the break.
END_OF_DOCUMENT_TOKEN_TO_BE_REPLACED

As tragic as the demise of Venice has been to watch over the last five years or so, it turns out that she still has some life in her. If anyone had asked me five years ago which neighborhood of Los Angeles might successfully oppose a BID, I would have said Venice without even having to think about it. But the last half-decade, what with sociopathic techbros of both sexes in possession of orders of magnitude more money than sense buying every sliver of land in sight and thereby running the prices up into the stratosphere even as they’re hogging the waves with their irremediably Barneyfied GoPro equipped styrofoam surfboards, zillionaires remodeling the canals into a nightmare AirBnB horror show, stupid fucking restaurants that…evidently leave me speechless, all this had driven me into what I thought was an inescapable well of cynical despair with respect to the fate of this dearest of all areas of our City.

Well, tonight the Clerk’s office placed a petition with 169 signatures of Venice residents opposing the formation of a BID there and, just like that, my hope in Venice is restored! They oppose it articulately, wisely, and for all the right reasons, too:

We, the undersigned, oppose the establishment of a Venice Beach Business Improvement District (BID). We believe in public control of public resources and oppose the privatization of those resources. We support renters’ rights, both for residential and commercial renters, and oppose taxation without representation. BIDs impose taxes that renters often pay, but which landlords decide upon. BID private security forces have a track record of infringing on the rights of our lowest-income neighbors, especially those people who are unhoused. We oppose private security fources controlled exclusively by commercial and industrial interests when their impact will affect the entire community, especially those disenfranchised from BID governance.

And it’s worth reading the cover sheet, too, which is signed by a number of right-thinking organizations and lays out a spot-on general anti-BID theory in the highly specific context of opposing this BID. You can read it here and there’s a transcription after the break:
END_OF_DOCUMENT_TOKEN_TO_BE_REPLACED