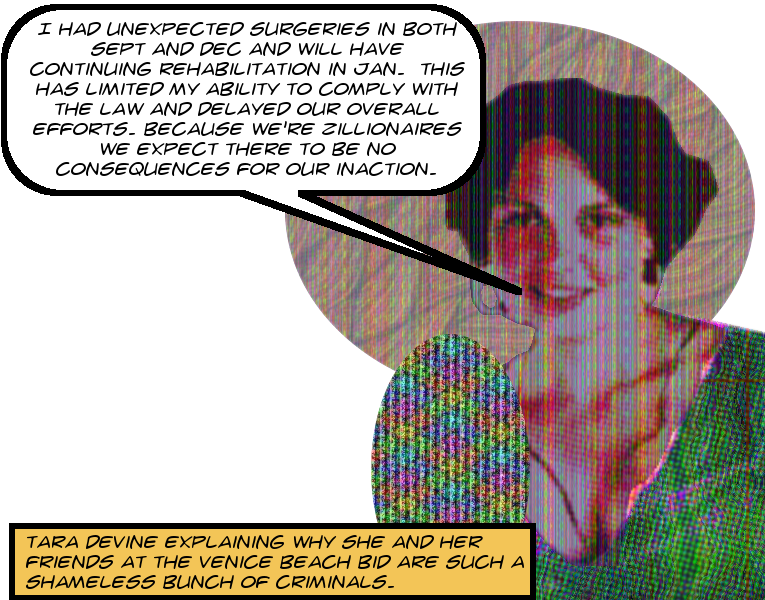 Perhaps you recall that the infamous Venice Beach Business Improvement District has been nonoperational for an entire year after the second-time’s-a-charm reapproval by City Council, whose blindingly arrogant indifference to both law and decency necessitated this expensive and amateurish do-over.

The meeting is on Friday morning at 10 a.m. If you’re able and willing to attend and film the entire meeting, which is your absolute right under the Brown Act, please do so, as various prior commitments prevent me from attending. If you’d like some tips on how to film Brown Act meetings effectively, please get in touch!

Meanwhile, turn the page for a critical analysis of selections from these woefully deficient documents as well as some special bonus info on how and why President Tara Devine and her co-conspirators are so arrogantly outlaw.

We’re just going to take this one item at a time. First, note that the so-called 2017.01.05 VENICE BEACH BUSINESS IMPROVEMENT DISTRICT.pdf has this as its header:

Whereas the other agenda circulated has this:

One of the most widely ignored distinctions in BIDology is the difference between a business improvement district (BID) and the property owners’ association (POA) contracted with the City to administer it. A business improvement district is a geographical area in which the City collects special assessments.2 On the other hand, according to §36612 of the PBID Law: ‘“Owners’ association” means a private nonprofit entity that is under contract with a city to administer or implement improvements, maintenance, and activities…’

That is to say that the BID is the physical geographical area in which the assessed property is located. The POA is the corporation that decides how to spend that money. So when the VBBID3 claims that the board of directors of the BID is meeting, they’re not making any kind of sense at all. Only a corporation can have a board, not some land near the beach. It’s the POA that’s meeting here as well as in the second meeting where it’s explicitly acknowledged.

By the way, they copped this bullshit distinction from their partners in crime over at the Central City East Association, which is the only other POA/BID I’m aware of that enforces this baseless distinction.4 Both the CCEA and the VBBID do this to isolate their closed session from the rest of the meeting. They probably think they’re exploiting some putatively clever loophole, but the chances are really good that they’re wrong.

Now take a look at item 3c on the first agenda:

c. Recommendation from the selection committee to award contracts for
i. Ambassadorial-style “safe” services
ii. Maintenance and janitorial “clean” services

This strongly suggests that the BID has been holding unnoticed, unannounced, nonpublic meetings of something called “the selection committee.” This covert committee seems to have decided on who to award the security and cleaning contracts to, and yet did not hold Brown-Act compliant meetings.

Ordinarily the next move would be to make a public records request for records pertaining to the selection committee and use those to make a complaint to the L.A. County D.A.’s public integrity unit like I did recently with the Los Feliz Village BID. However, as that same report taught me, the D.A. won’t take on cases older than 90 days. I’ve seen many an example in my time of BIDs ignoring the requirements of the CPRA, and delaying the production of records, which is a clear violation, is one of their favorite tactics.

Most of the BIDs in L.A. delay, but no one has managed to change pure blockheaded obstructionism into more of a fine art than President Tara Devine. That’s why, instead of closing this post with a simple call to action and announcement that I’m going to get the damn records and see that the thugs are prosecuted,5 I’m going to end it with a selection of emails between yours truly and President Tara Devine on the subject of a CPRA request, just to illustrate how these folks are running their criminal fiefdom by the sea.

First of all, you can get all the emails here on the Archive. And here are transcriptions:

2. All communications, including but not limited to email, between anyone at the VBBID and anyone at Devine Strategies, including subcontractors, e.g. Ed Henning and any others about whom I don’t know.

3. All intra-board communications that relate to the business of the BID.

Thanks in advance for your help and cooperation,

◉ March 8, 2017 status request — No response from the BID, friends. Regular readers of this blog are no doubt aware that the CPRA §6253(c) requires the BID to respond within 10 days by stating whether they have records and when and if they’ll be handing them over.6 Thus it’s good practice to send an occasional status request after the ten days are up.

Is there any news on this request?

Can you please respond to this? A reply was due on February 27.

◉ October 14, 2017 status request — Still no answer. At this point it’s clear that they’re not answering without being asked by a lawyer. This is a popular tactic amongst BIDs because, even though it violates the CPRA, according to lawyers with whom I’ve discussed the issue, because of some technicalities in the law, it’s not enough in itself to get a judge to intervene unless it gets really egregious.7 Around October it started getting really egregious, hence another status request.

I’m wondering what has become of the appended request. I sent it eight months ago. The law requires you to have responded by February 27, 2017, but you have failed to respond at all.

I see that I neglected to include a starting date for your search. I need to see all such records from January 1, 2016 through whenever you run the searches.

Thanks for your help and cooperation,

◉ October 20, 2017 President Tara Devine’s first response — What was she doing for the six days between my email and her response? I’d bet good money that she was discussing what to do with the VBBID board members in explicit contravention of the Brown Act.8
Dear Mr. Kohlhaas:

Thank you for your CPRA request.

We are reviewing our records to determine any records responsive to your request.

Dear Mr. Kohlhaas:
Thank you for your interest in our records. For future correspondence, please update your records/make note of our BID email addresses as shown above.

We seek to provide these records at our earliest opportunity. At a minimum, we will provide an update by Thanksgiving.

◉ November 3, 2017 Me to President Tara Devine asking her to comply with the law — Well, that was too much. It’s really astounding how emboldened these BIDdies have been by the fact that Los Angeles City Clerk Holly Wolcott asserts that as far as she’s concerned, BIDs can violate the law as much as they want to and she’s not going to enforce either the law or their contracts with the City. Holly Wolcott has a lot to answer for. It’s a sad thing that the City Charter of Los Angeles makes the Clerk an appointed position, so she has no incentive to please anyone but her masters at 200 N. Spring Street.

It also requires you to make records available promptly, which you have failed to do.

◉ November 22, 2017 unsolicited status report from President Tara Devine — No answer to the substantive email I sent, just this nonsense:

We continue to work on your request and expect to provide at least partial records in December. We will continue to provide a regular update until we have completed the request.

◉ January 2, 2018 unsolicited status report from President Tara Devine — Oh, for God’s sake, right? Anyway, this is the latest, but I’m sure not the last, installment. Stay tuned, friends!

I had unexpected surgeries in both Sept and Dec and will have continuing rehabilitation in Jan. This has limited my ability to work on many items (including your request) and delayed our overall efforts. We are continuing to work on your request and will keep you apprised.

Image of Tara “Teresa” Devine is ©2018 MichaelKohlhaas.Org and was painstakingly mogrifactionated outta this lil item here.