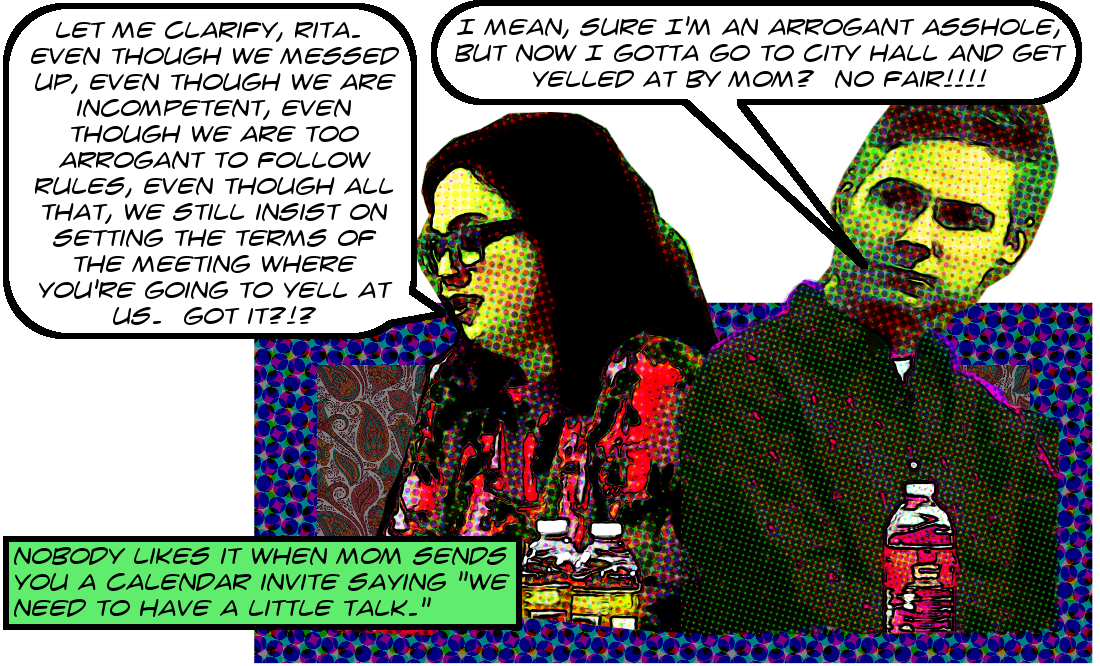 A bunch of new documents for you this morning, friends! You can look through the whole pile of them here on Archive.Org, and read on for some selected gems!

First of all, recall that the Venice Beach BID is being required by the City to refund most of the money collected from property owners in 2017 because they were too damn arrogant and/or incompetent to actually do anything other than pay themselves salaries with the almost two million dollars the City handed over to them.1

You can read this copy of the letter to property owners along with instructions for filling out the necessary affadavit. This was scheduled to be sent out on May 11. What’s more interesting, though, is this email exchange from May 8 between Tara Devine and Rita Moreno about when this letter was to be sent. First Rita Moreno emailed Tara Devine at 3:20 p.m. and said:

For your information, attached is the notice and instructions that will be mailed out on Friday. Also included will be the actual Affidavit and the return envelope.

Let me know if you have any questions.

A mere seven minutes later2 the shadowy one fired off this intemperate reply:

Thank you. To clarify, we want to sit down before anything is mailed . It is important that we understand the entire process.

I’m working now to schedule something as early as possible next week. (Monday is launch, so it can’t be Monday.)

Amazingly, Tara Devine does not seem to understand that she’s not in charge of this situation. She and her BIDdies out in Venice have messed up far, far beyond what’s acceptable to the City, and it takes an awful lot to get to that point. She does not have the leverage to set terms. Which is essentially what Rita Moreno said to her in reply.

Turn the page to read that reply as well as the story of Tara Devine and Steve Heumann’s May 18 meeting at City Hall with a bunch of angry City officials and the story of how as of this Wednesday, May 23, Tara Devine still hasn’t gotten that damn annual planning report in!

We have several other mailings and need to manage our work load. We have some target dates, as we stated in our letter to the BID. We expect to get the affidavit out mid-May and project that most signed affidavits will be returned within 30 days. That allows us to get refunds to folks by mid-July.

I’m off on Monday and several reports are due on Tuesday. We’ll discuss on our end, but may not be able to push the mailing date out any further.

Oh, and then gaze upon this email chain concerning a meeting at City Hall last Friday, May 18, with the following illustrious attendees:

And here’s the agenda:

It’s hard to tell from the evidence what’s really going on here. Taylor Bazley is the organizer, so I’m guessing maybe Tara Devine didn’t take kindly to Rita Moreno blowing off her meeting request as described above so she went whining to Taylor Bazley. Mike Bonin clearly isn’t totally fed up with these Venice BIDdies yet,3 so Taylor Bazley set up the meeting.

Usually Council offices are the boss of everything, but this VBBID stuff may have gone too far for that, as the Clerk’s office is independently responsible for making sure that BIDs comply with state law, and the VBBID is hardly doing that. This probably gives the Clerk enough leverage to overrrule Council office coercion in a way that City officials are not usually able to do.4

And finally, take a look at this email chain about the Venice Beach BID’s annual planning report. The fact that the BID didn’t turn this in on time, like November 2017 like all the rest of the BIDs, was a major issue leading to City Clerk Holly Wolcott’s recent threat to disestablish the BID. The BID approved their APR at their April meeting and submitted it to the City on April 30. However, there were some significant problems with it and Rita Moreno told Tara Devine that the BID would have to revise it.5

Here’s how it went down. On May 1, 2018 Tara Devine emailed Rita Moreno thusly: “We’ll work on the APR changes asap. “ Having heard nothing, on May 16, 2018 Rita Moreno emailed Tara Devine, and here’s what she said:

Just a reminder to correct and resubmit the 2018 Annual Planning Report for the Venice Beach BID.

And one week later, on May 23, 2018, just two days ago, Tara Devine finally deigned to respond, and here’s what she said: “I’ll take care of this this week. Thanks for discussing/clarifying last Friday.” It’s not like Tara Devine can’t respond quickly when she wants to. We just saw above that she can respond in seven minutes if she wants to. It’s more Tara Devinean weirdness that I’m never going to understand. But I’m sure gonna keep writing about it. Stay tuned!

Image of Tara Devine and Steve Heumann is ©2018 MichaelKohlhaas.Org and is a modified screenshot from here.