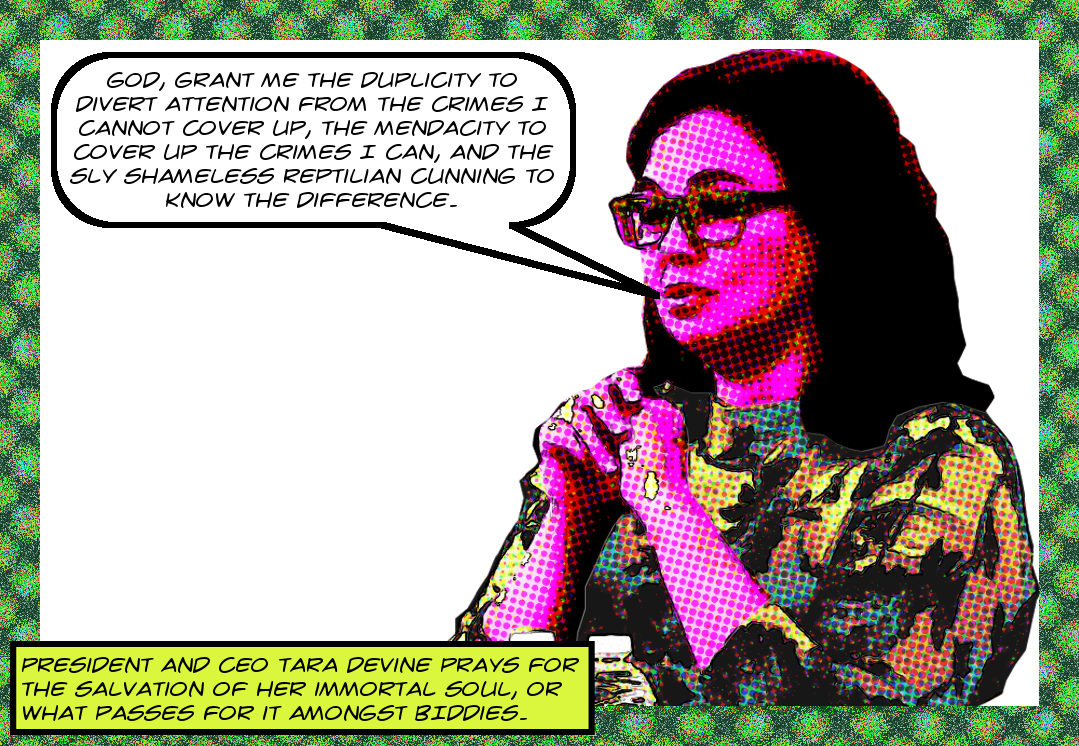 Well, friends, if you’ve been following the saga of the Venice Beach BID for what seems like forever but has only been at least in the most recent iteration about two years, you’ll know all about how BID ED Tara Freaking Devine is not only overpaid as a BID consultant but she’s a liar and a damned liar and a lawbreaker and a damned lawbreaker and it took her and her white supremacist board of directors freaking forever to get their BID up and running.

Now, this kind of behavior on the part of a BID is bad enough, but from the City’s point of view the only really bad part is that the BID started 18 months ago and they’ve been collecting money from the property owners and they’re not spending it on the activities they’re meant to spend it on. Oh yes, and BIDs are also required to submit quarterly reports to the City and, this last by the actual state law regulating BIDs, an annual planning report to the City as well.1

And you surely won’t be surprised to learn that by March 19 of this year the damn BID hadn’t done any of that stuff at all. But what is surprising is that the City of Los Angeles decided to actually enforce their contract and the law. In furtherance of this worthy goal City Clerk Holly Wolcott sent VBBID boss honcho Mark Sokol a zinger of a letter stating that the BID was out of compliance and they had better get their act together quickly or else the City was going to hold a hearing to disestablish the BID per the PBID law at §36670.

Maybe this marks the start of a new policy, where the City of LA will actually encourage or maybe even force BIDs to follow the damn law. They’ve been absolutely unwilling to do this when it comes to CPRA compliance, but more recently have shown some teeth e.g. with respect to the contractual requirement to publish newsletters. Anyway, whatever’s going on there’s a transcription of Wolcott’s letter after the break and, as an extra special bonus, some discussion of some astonishingly whiny emails by Tara Devine about the noncompliance letter.

First of all, here’s a transcription of Holly Wolcott’s letter to Mark Sokol:

This letter is to inform you that the Venice Beach Property Owners Association (Corporation) is out of compliance with the terms of the Agreement entered into with the City (C-129375), for the administration of the Venice Beach Business Improvement District (VBBID).

Section 2.2. states the Corporation is required to prepare and submit quarterly reports and a planning report each year assessments are levied, to the City. Sub-section A. indicates the planning report is due annually by November 1 for the following year, and prepared in accordance with Section 36650 of the Act. Sub-section B. states quarterly reports are to describe the status and progress of programs and services as delineated in the Management District Plan. Further, statistical and financial data is to be included. Section 2.6. requires the Corporation liaison with the community through quarterly newsletters and provide the newsletters to the City for reference.

The Corporation is responsible for submitting the quarterly reports approximately 30 days after each calendar quarter. The Agreement was executed and attested, on May 31, 2017; therefore, the first quarter report covering the period from January 1, 2017 to March 31, 2017 was not required. However, the Corporation was required to submit subsequent quarterly reports and newsletters. As of the date of this letter, the Corporation has failed to submit the 2nd , 3rd , and 4th quarter reports and the 2018 planning report.

In an effort to bring the Corporation into compliance, the City agreed to deadline extensions. We are aware that Miranda Paster of our Office provided an extension to the end of February for the 2018 annual planning report. In phone conversations, there were commitments made to submit the quarterly reports and newsletters prior to the end of 2017. At our meeting of February 14, 2018, it was agreed that 2017 quarterly reports and newsletters would be submitted by the end of February, and the 2018 annual planning report in April, after Board approval. On February 22, 2018, the City received electronic copies of two letters sent by the Corporation to VBBID stakeholders, a website announcement, and a timeline of occurrences dating from the first ballot tabulation for the establishment of the VBBID, to the date of the first VBBID meeting on June 9, 2018. Collectively, the City has accepted these documents as meeting the quarterly newsletter requirement for the 2 nd , 3 rd and 4 th quarters of 2017. However, the Corporation has not submitted the required quarterly reports rendering it noncompliant.

The Corporation must submit to the City the delinquent quarterly reports for the 2nd , 3rd and 4th quarters of 2017 no later than Friday, March 30, 2018, and the 2018 annual planning report (as mandated by Streets and Highways Code 36650) by April 30, 2018. Failure to do so will obligate the City to notice a hearing before the City Council regarding the disestablishment of the VBBID, per Government Code 36670 of the Property and Business Improvement District Law of 1994.


Next, take a look at these emails. After receiving Wolcott’s letter, President Tara Devine whined thusly:

Thank you for the letter; the deadlines are acknowledged. As Rita is aware, our accountant recently worked with City staff to resolve a discrepancy in your transmittals, and I just received quarterly financials from him at the end of last week. Quarterlies are in process.

On October 16, 2017, I completed the online steps to activate our LAVSS account, but never received the promised activation code. Yesterday, I ascertained that our registration was never completed, and re-applied for the activation code. Kindly confirm that Annual Planning Reports should be submitted via LAVSS.

In case it’s not utterly clear, what we have here is a bad case of attempted blame-shifting. Tara Devine is all like Rita’s already aware of some irrelevant stuff that the City screwed up on and I am doing my best with respect to City incompetence. Not plausible, is it? Sad and impotent attempt at the preservation of long-lost dignity. Rita Moreno,2 not so easily trapped, replied:

As I explained to you and the accountant, you are only responsible for reporting on the expenditure of funds you actually received. We will account for any 2017 funds that may have been received by the City, but not transmitted to the Venice Beach BID.

We previously informed all of the BIDs that annual reports are now transmitted to the Clerk via our online portal. As the primary contact for the Venice Beach BID, you received an email message from clerk.nbids@lacity.org on two occasions providing you the link to complete the 2018 Annual Report. Let me know if you need me to resend the message again.

The Clerk is not responsible for LAVSS, the Controller’s portal to submit invoices online. The screen where you attempted to create an account provides a “contact us” tab so that you can obtain assistance. Here is a link: https://lavss.lacity.org/webapp/VSSPSRVII/advantage/AltSelfService/LoginContactUs.html

In other words, she called shenanigans on President Tara Devine. None of the nonsense propounded by the shadowy one had anything to do with the fact that the BID didn’t submit quarterly reports for a whole freaking year and also didn’t submit their annual report as required by law. TL;DR: Oh, snap!

And it’s not like President Tara Devine just walked in off the street to run the damn BID. She’s a BID consultant certified by the City of Los Angeles. She has, it seems, satisfied the City’s rigorous requirements for being a BID consultant. Read the requirements. Make the obvious jokes about how Tara Devine loses 15% off the top for her distinct lack of honesty, integrity, and likability.

Look at the more substantive qualifications, like e.g. “demonstrated experience in performing the services required” or maybe “documented ability to perform on a timely basis.” Together those two requirements add up to 75%. Clearly getting a noncompliance letter from Holly Wolcott pretty much reduces Tara Devine’s score on those two down to zero. That leaves 10% for references, which we’ll give her. One hopes she won’t be certified much longer.

P.s. By the way, last Monday, April 30, the VBBID finished submitted all the required material when President Tara Devine sent this email to Rita Moreno stating that everything was submitted. The annual planning report marks a momentous opportunity for unhappy property owners to get removed from the BID by Mike Bonin. Whether or not he’ll do it who can say, but he has the chance to do it. I will be writing on this very, very soon.

Image of Tara Devine is ©2018 MichaelKohlhaas.Org. It’s a modified version of a screenshot of this video at this moment.