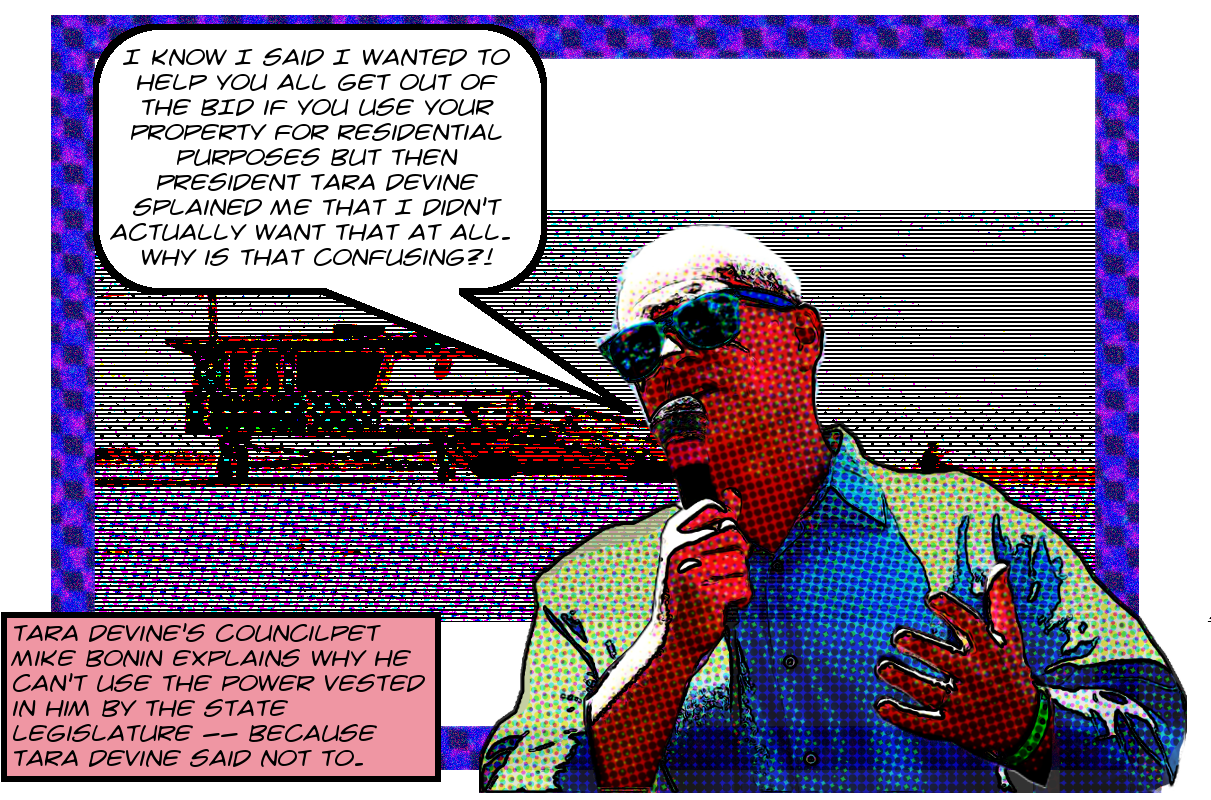 Business improvement districts in California are required by the Property and Business Improvement District Law of 1994 at §36650 to submit an annual planning report to the City every year. The reports must subsequently be approved by the City Council.

One function of these reports is to explain how the BID will spend its money in the coming year, but they have another important purpose. According to the statute:

The report may propose changes, including, but not limited to, the boundaries of the property and business improvement district or any benefit zones within the district, the basis and method of levying the assessments, and any changes in the classification of property, including any categories of business, if a classification is used.

In other words BIDs are allowed to remove properties entirely or reduce their assessments, presumably all the way to zero if they so choose, merely by stating that they’ll do so in their annual planning report.

Now, the Venice Beach BID approved their APR at their April 13, 2018 meeting and submitted it to the City on April 30. They didn’t propose any changes in boundaries or assessment methods. But it turns out that, according to the law, they don’t have the final say. The statute says at §36650(c) that:

The city council may approve the report as filed by the owners’ association or may modify any particular contained in the report and approve it as modified.

So that means that not only can the BID use the APR to remove properties or to reduce their assessments even down to zero, but the City Council can do that also, even without the BID’s approval. And the way things work in the City of Los Angeles, that means that Mike Bonin himself can make the changes. There’s no way his colleagues are going to oppose him on a matter that affects only his district. Read on to see how this might actually lead to properties being removed from the BID this year!

In 2016 when the BID was approved, Bonin famously offered to help unhappy property owners get their properties rezoned as a way to remove them from the BID. I pointed out at the time that he essentially had unilateral power to remove them even without rezoning, but was unwilling to do so. Since then, I’m told, he’s refused to help get the properties rezoned. But as I pointed out at the time, it doesn’t matter what the zoning is. As I said, he can use the Council’s power to rewrite the APR to remove all those properties or erase their assessments.

Now, the BID submitted their APR on April 30 in response to a fairly serious threat by City Clerk Holly Wolcott to start disestablishment proceedings if they did not. However, according to Rita Moreno of the Clerk’s office, the APR that they submitted needs some revisions before it goes to City Council and also it will be going to the Economic Development Committee first. It can be rewritten to remove properties or change assessments at any stage.

Moreno didn’t know when this was going to happen, but it will probably be fairly soon. If you’re a disaffected property owner in the BID, right now is probably the time to ask Bonin to make good on his promise from November 2016 to help you get your property out of the BID or at least to reduce your assessment to nothing. He has the power to do this, and if he won’t he ought to at least explain why.

Given the sheer power invested in the APR, and given the mercenary motives of the Venice Beach BID Board of Directors, not to mention President and CEO Tara Devine, it’s really no surprise that they completely glossed over everything in the meeting where they approved it. You can watch the segment here. Everyone’s acting as if it’s just some inconsequential nonsense that the BID is required to submit to the City. For instance, in response to some really probing questions by anti-BID activist Marlene Okulick, Tara Devine says:

[Annual reports are] not really sexy stakeholder communication oriented in their nature. They are driven by or structured to meet requirements of the City that we have in terms of reporting.

This is true as far as it goes, but as is Tara Devine’s wont, it’s a lie by omission. Can you imagine the differing impact on her audience if she had said something like:

Whole different vibe, there, innit? Anyway, there’s a transcript of most of the discussion below. But really, if you own property in the BID and you’re unhappy about it, try to get Mike Bonin to remove your property using the power vested in him by the BID law at §36650(c). And let me know what happens!

Mark Sokol: The next item is item E. The Board’s discussion and consideration of the BID’s 2018 annual planning report. Tara.

Tara Devine: In your packet is a copy of the annual planning report that we propose to submit to the City. The Board is free to make suggestions, comments, or changes to this. Steve Heumann, who is our treasurer, and I worked with our [unintelligible] to come up with this budget. It hews very closely to our management district plan. They’re permitted to vary by up to ten percent within a budget category per year. This budget is pretty on the nose. Our percentages in our original management district plan are 73%, 20%, and 7%. If you look through it you’ll see we’re very close on all those [unintelligible]. So we’re well within the variation allowed. This is forecasting forward, so this report is a looking forward at the year. There are other reports that we will file at the end of the year. We also, I will take this opportunity to update, we are now current with our quarterly reports and our quarterly newsletters. All those have been submitted to the City. The quarterly newsletters were actually done in a timely fashion, but the Clerk’s office did not have them on file. The quarterly reports we have caught up on. We’ve had a few things going off, but we are caught up on the quarterly reports and with the annual planning report we will be complete on our submissions to the City. We do still have an outstanding conversation to have in regard to refund of assessment revenues. We have not yet heard back from them. We sent a letter requesting to open that dialogue. So with that I open this up for any suggestions for changes, edits, questions, etc.

MS: I have a question. Where the variations occurred? Where are they? Are they one or two percent or…

TD: So if you go to page [unintelligible], open up to that page …

TD: All of our budget categories vary actually by less than half a percent. We’re pretty on the nose.

MS: Thank you. I thank Tara and Steve Heumann, our treasurer, for all their efforts on this. Any other Board comments before we go to public comment? OK. Is there any public comment on this item?

Marlene Okulick: I’m just wondering, Tara, I haven’t seen any quarterly reports or quarterly newsletters. I don’t think anybody here has either. Is this a public quarterly report or is this just for the City or just for amongst yourselves? You probably can help me with that.

TD: I will answer that. That’s a good [unintelligible]. So, quarterly newsletters, mailings that we’ve done to property owners are considered quarterly newsletters for the purposes of our launch period. Those will get more informative over time as we build up our marketing program. So the City Clerk’s office is fine with … we’ve done four mailings since the BID signed the contract with the City. Those have been accepted as our quarterly reports. They will become more robust as we have more information to share with you. But those have been our external communications thus far. In terms of the quarterly reports, those are internal reports we file with the City. You’re welcome to request a copy of them, but they are part of our contract with the City. They’re not per se reports that we disseminate.

MO: I just feel this is [unintelligible] of the people, that we should have knowledge of what’s happening behind the scenes in a more specific way rather than these little postcards and beeps, because if we don’t know what’s going on then we have nothing to respond to and you’re keeping all of us in the dark and it’s not really beneficial to anybody. We’re all going to get angry.

TD: I understand. So the quarterly reports and the annual planning report are things that we’re required to submit to the City and the City is the target audience for those reports. However, now that we have a website that’s about to go live, we’re going to post those things on the website so that anybody who wants to access them can access them. But again, you’ll see if you read them they’re not really sexy stakeholder communication oriented in their nature. They are driven by or structured to meet requirements of the City that we have in terms of reporting.

MS: Point taken, and they’ll be posted on the website. Your point about transparency is a good one.

Image of Mike Bonin is ©2018 MichaelKohlhaas.Org and is transmogrified offa this Mike Bonin right here along with this picture of the only beach that matters.