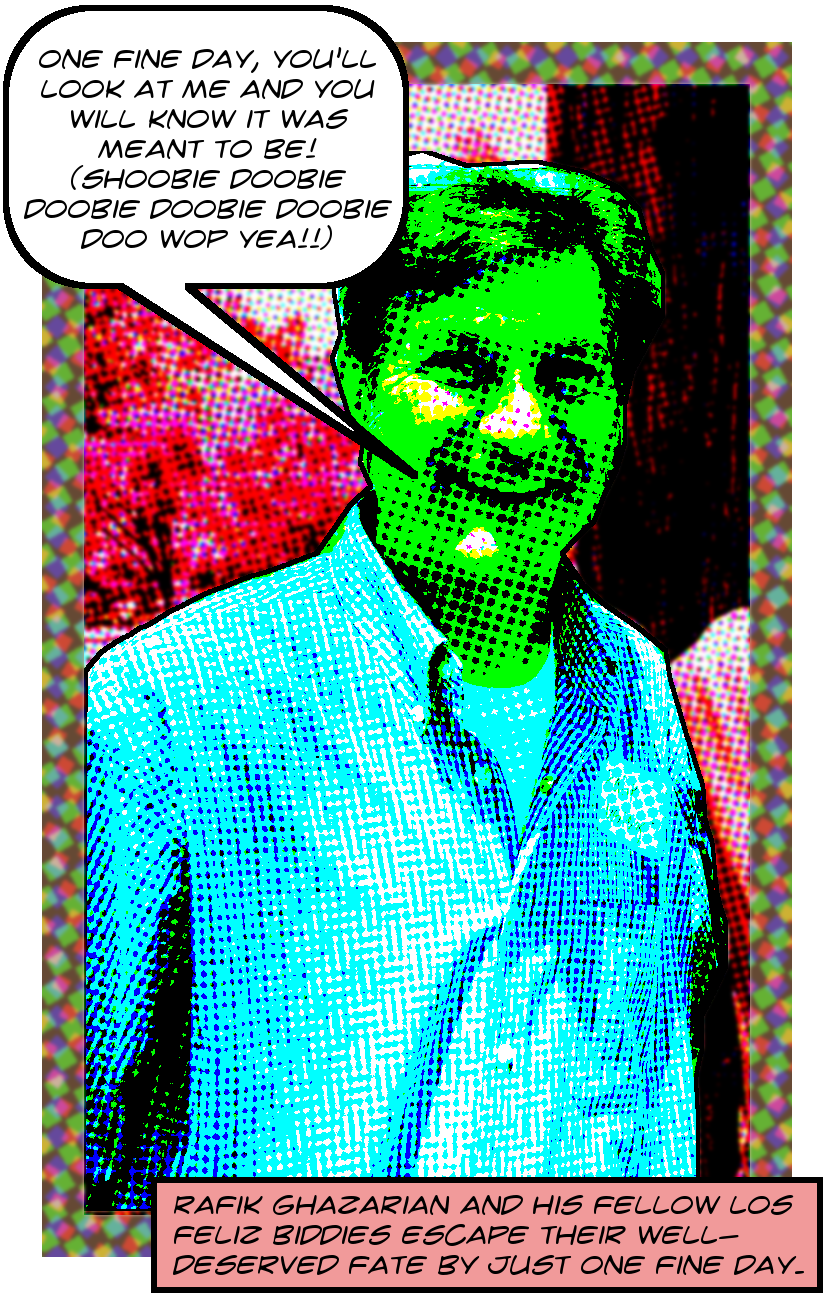 One month ago today, you may recall, I reported the Los Feliz Village BID to the Public Integrity Division of the Los Angeles County District Attorney’s Office.1 I had exceedingly strong smoking gun level evidence, and you can read the original complaint here. Well, this morning I was semi-pleased to receive a copy of a letter from Alan Yochelson of the D.A.’s office to the BID’s attorney, Mr. Hollywood himself, Jeffrey Charles Briggs.

You can read a transcription after the break, but the upshot is that, as the DA received my complaint 91 days after the incident, they were barred by the Brown Act, which requires action within 90 days, from doing anything about it. However, Alan Yochelson, who handles Brown Act matters for the DA, saw fit to advise Jeffrey Charles Briggs to tell his client, the LFVBID, that such discussions as were had outside of duly noticed public meetings by the BIDdies, were against the fricking law.

The stakes were high, as it’s at least theoretically possible to force the dissolution of a BID if they’re found to have violated any law. Hence I expect that they’ll probably pay close attention to the Brown Act’s requirements in the future. I know I’ll pay very close attention to the deadline, which I didn’t know about, more’s the pity!
END_OF_DOCUMENT_TOKEN_TO_BE_REPLACED 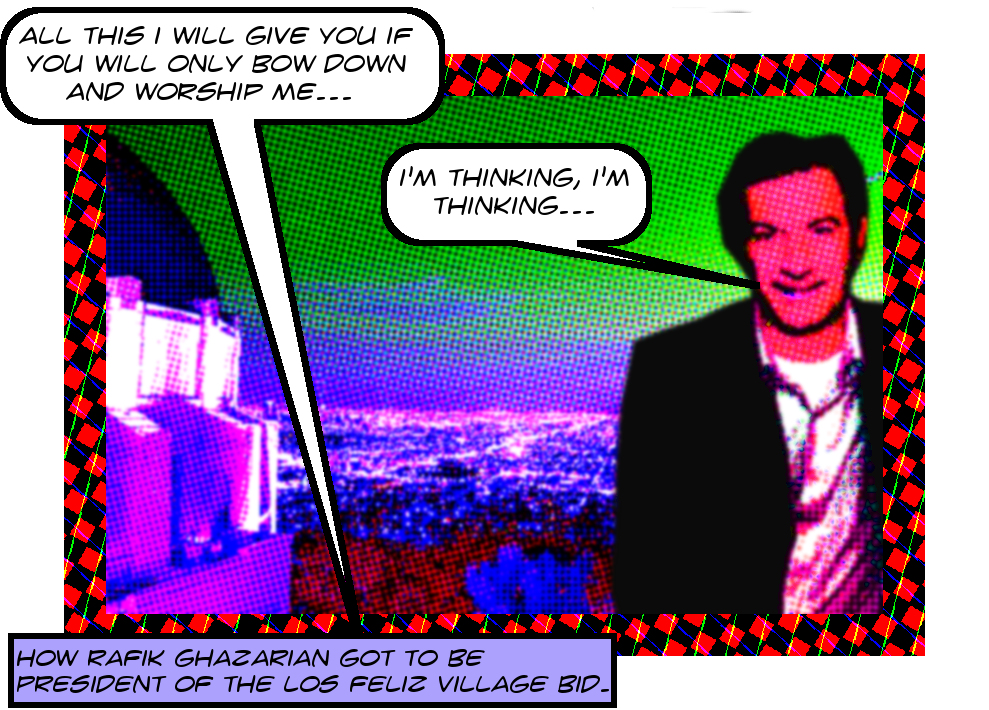 You may recall that a couple weeks ago I published a big stack of emails from the famed Los Feliz Village BID. Amongst these were this little gem of an email chain, wherein the entire Board of Directors of the LFVBID, over the course of about two weeks in May 2017, discuss some nonsense relating to something called Urban Air Market. The facts themselves are as tedious as can be but, as I noted previously, the Brown Act at §54952.2(b)(1) explicitly forbids this kind of thing:

Well, I’ve been so busy working on matters related to the revisions to the Municipal Lobbying Ordinance that’s presently being worked on by the Ethics Commission that I’ve barely had time to think of anything else. Yesterday, though, I needed a little break from lobbying and decided to take the time to write up a report to the LA County DA’s Public Integrity Division regarding this egregious violation. You can download a copy of the complaint or read a reasonably faithful transcription after the break.1 END_OF_DOCUMENT_TOKEN_TO_BE_REPLACED 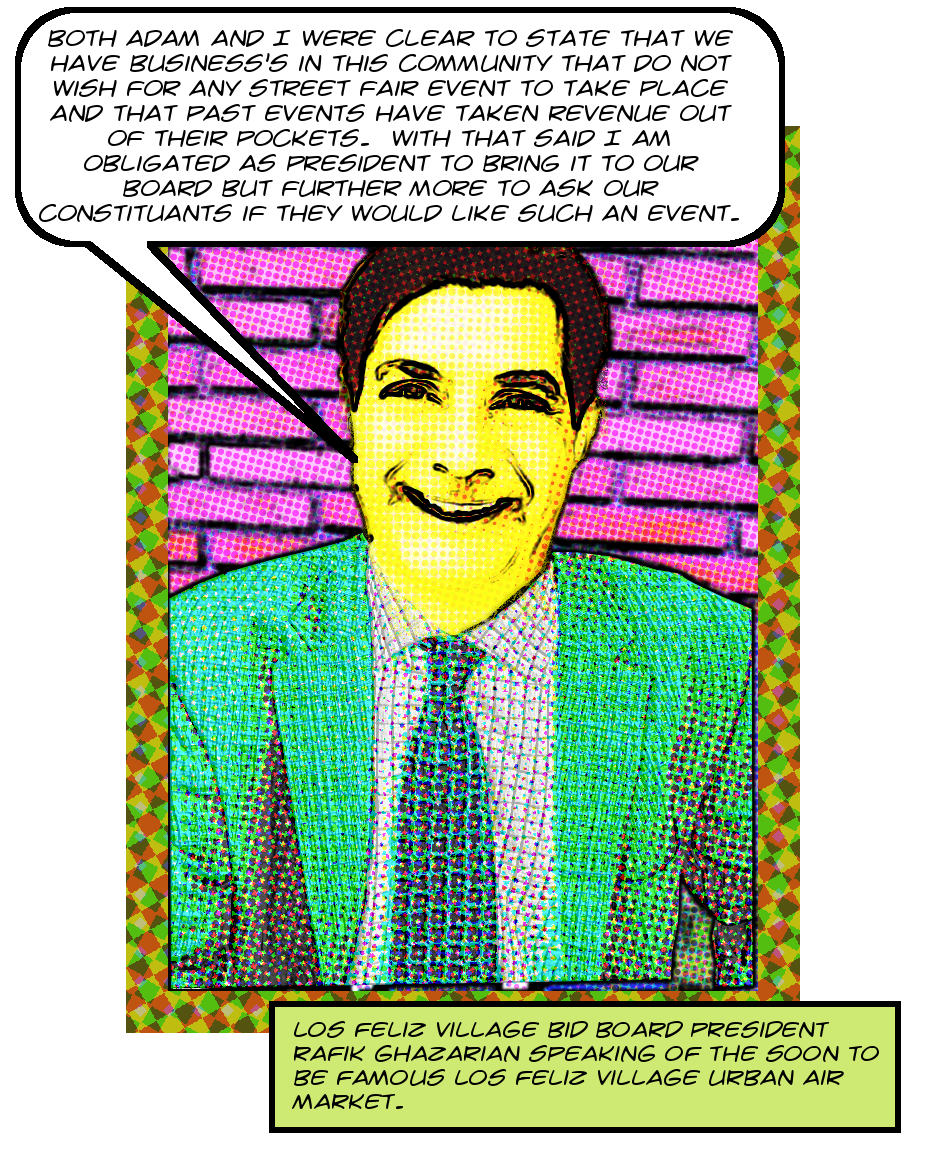 Attorney Briggs then exported the forwarded emails as MSG files and passed them along to me. Unfortunately this process mangled the metadata and made it more trouble than it seems to be worth to sort and rename the files by date and time. Sr. Briggs seems to be willing at least to consider instructing his clients to provide actual exact copies of emails in the future, but for now we’ll work with what we got, especially since the whole process has taken more than six months to get to this point. Anyway, turn the page for discussion of a few highlights.
END_OF_DOCUMENT_TOKEN_TO_BE_REPLACED 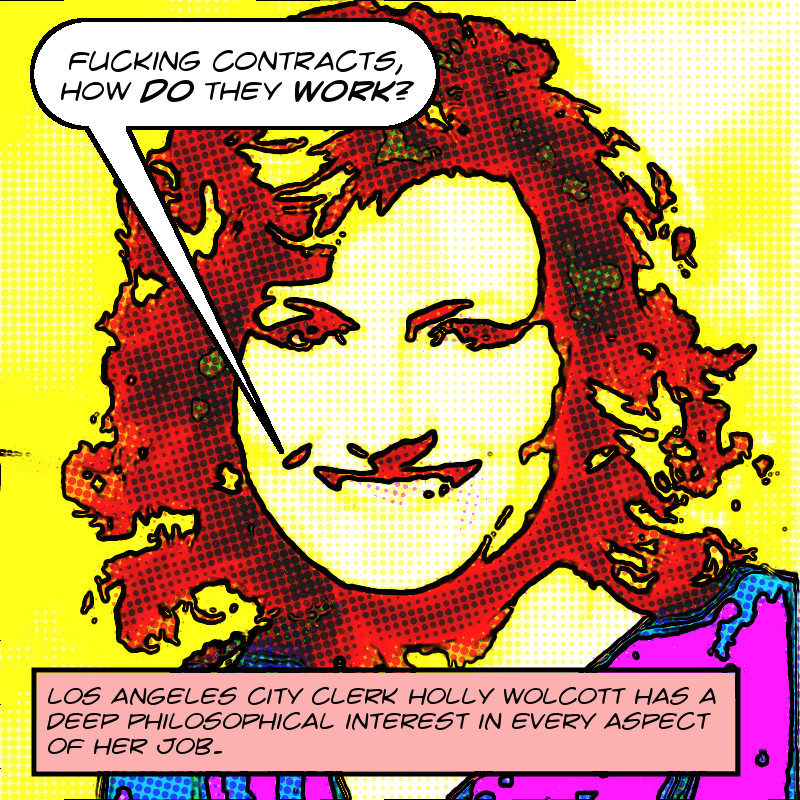 Yesterday evening, BID-lawyer-to-the-stars Jeffrey Charles Briggs passed along almost 200 emails between Media District BID executive director Lisa Schechter and various people at the City of Los Angeles. These are available en masse at Archive.Org. As always, there’s a lot of chaff in there and a few super-interesting things.1 Perhaps today’s story is an example of the latter.

It began on February 28, when Rita Moreno, newly of the Neighborhood and Business Improvement Division of the City Clerk’s office, the unit that’s meant to oversee the operations of BIDs and make sure that they follow the law and stuff, emailed a bunch of BIDdies to introduce herself and note that only a few of them had their meeting times posted on their websites. Of course, the Brown Act explicitly requires BIDs to notice their meetings on their websites,2 but that’s actually not why Rita was on about this. She was just trying to find out when they met so that she could attend. In fact, it’s not even clear that Rita Moreno knew about the Brown Act requirement.

However, the very next day, our old friend Lisa Schechter of the Hollywood Media District BID, who is not generally known for her law-abiding behavior but who has by now been educated by years of our intense scrutiny to the point where, I hope, she’s beginning to realize that it’s just easier to follow the law,3 wrote back to Rita Moreno, fishing for praise from this unlikely authority figure:

Just to reiterate, all of our meetings are posted in accordance with the Brown Act (Committee as well as Board) – Further you have been placed on our automatic distribution list which triggers and [sic] email directly to you for all of our meetings. If you should require any further information please do not hesitate to contact myself or our operations manager, Jim Omahen.

Yes…you got a star ★

And if you’re new to BID studies, you’re probably wondering why this puerile exchange is not just idiotic, sycophantic, and moronic, but also deeply offensive and discouraging to anyone who cares about the rule of law in Los Angeles. Well, read on!
END_OF_DOCUMENT_TOKEN_TO_BE_REPLACED

The First Amendment Coalition is, in their own words,

and their mission includes the fairly forthright statement that

The Coalition is committed to the principle that government is accountable to the people, and strives through education, public advocacy, litigation, and other efforts to prevent unnecessary government secrecy and to resist censorship of all kinds.

For instance, in furtherance of this mission, the FAC is presently suing the City of Los Angeles over Tom LaBonge’s immoral and idiotic destruction of records from his time as Councilmember. They were also a friend of the court in the recent momentous California Supreme Court decision making the personal email accounts of public officials open to CPRA for material that relates to the public’s business. This is not an organization that anyone sane would expect to be sympathetic to the whiny, entitled, and clueless complaints of a business improvement district that has been asked to comply with its legal obligations under the California Public Records Act, amirite?

One of the most useful services that the FAC provides is called Asked & Answered. People can send in questions about CPRA and the Brown Act and the FAC’s attorneys from Bryan Cave will answer them publicly and for free if they might interest a wider audience. These questions are usually from people frustrated by inane, self-serving, and illegal government obstructionism in the face of CPRA requests. So imagine my surprise when, a few days ago, this little gem of a question appeared:

Q: As a Business Improvement District, we are an agency of our local gov’t and subject to PRAs. I have submitted countless reports, minutes/agendas, financials and even a record of one full year of emails. Now I have been asked to submit the email database I have developed for communicating with my business members.

I am not comfortable giving this database to the public. While I have no problem disclosing my email correspondence, I do not feel right giving my email database to someone who can then send mass emails to these businesses.

Do I have to submit the database if requested through the CPRA?

Well, given the FAC’s general orientation towards CPRA, you can probably imagine the answer, and you can also read it, with some commentary and the usual uninformed speculation, after the break.
END_OF_DOCUMENT_TOKEN_TO_BE_REPLACED

Just a quick note to announce a bunch of new materials. Most importantly, the Los Feliz Village BID, in the person of BID boss Rafik Ghazarian, sent me an Excel spreadsheet with mailing addresses for everyone in the BID. Given the months-long, dentaloextractivist-level dramatics created by the City of Los Angeles in the persons of asylum-running lunatics Miranda Paster and Holly Wolcott over e.g. the Venice Beach BID mailing list and the SLAIT BID mailing list,1 this is a surprising and welcome development. It’s especially laudable given that the Los Feliz Village BID has been the target of at least one significant attempt to destroy it, and, given that it’s a merchant-based BID, and thus required to renew each year, will certainly be so yet again.

I also have tax returns from the creepy little apartheid stronghold in South Central Hollywood known to the world as the Larchmont Village BID, as well as a bunch of assorted jive-ass nonsense from Mr. Mike out in Wilshire Center. Turn the page for links and descriptions.
END_OF_DOCUMENT_TOKEN_TO_BE_REPLACED