One of my very long term projects is finding proof that the City Council does in fact engage in these illegal meetings and also to understand the means by which they do it. It’s slow going, though, and not just because of the City’s general unwillingness to comply with the Public Records Act. What I’m looking for is evidence of habitual and chronic outlawry, so the City has even more pressing reasons to withhold the records.3 But from time to time I come across something interesting and suggestive, and today I actually have two!
END_OF_DOCUMENT_TOKEN_TO_BE_REPLACED

The Los Angeles City Council Homelessness and Poverty Committee met today, October 8, 2020 and considered, among other things, a Mitch O’Farrell motion to use the Hollywood Recreation Center as interim housing for the homeless. The incomparable Ktown for All livetweeted the meeting and raised the possibility that O’Farrell would use such housing as an excuse for enhanced enforcement of anti-homeless laws in the vicinity.

This is not a baseless fear. Councilmembers universally try to gain the approval of unhinged anti-shelter housedwellers by promising intensified criminalization of homelessness. O’Farrell did precisely that in 2018 with the Hollywood Bridge Housing project, for instance.

Also, the Hollywood Rec center is gang turf, claimed by a particularly violent crew of absolutely genocidal NIMBYs who continually threaten to attack homeless encampments near the park. This deranged mob is led by weirdo Kanye West producer Anthony Kilhoffer, who owns a rental property at 1149 Cole Avenue, directly across the street from the Rec Center.
END_OF_DOCUMENT_TOKEN_TO_BE_REPLACED 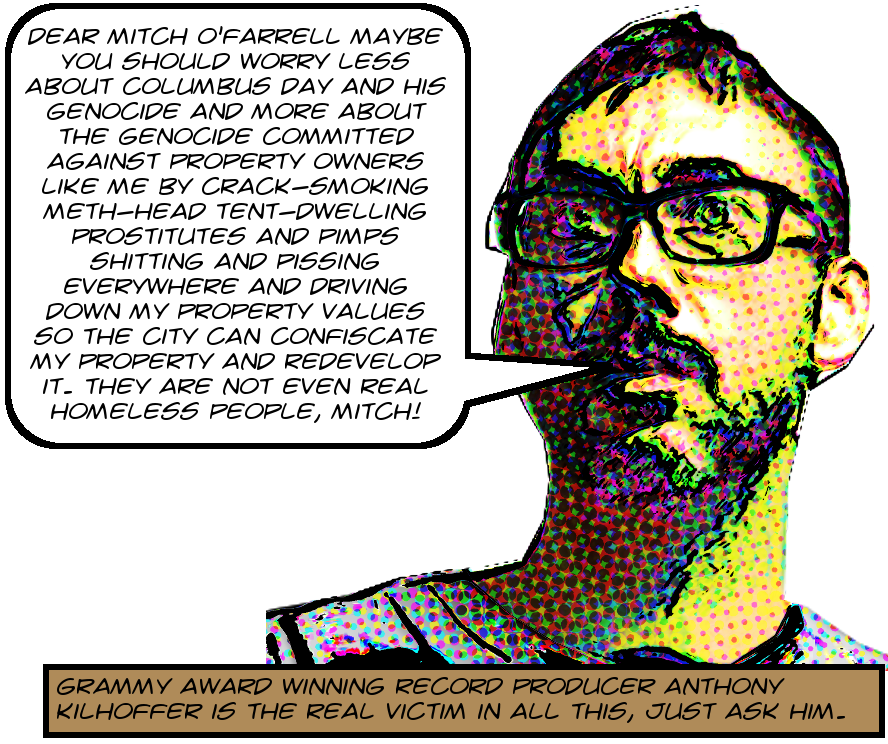 One of the perennially interesting unsolved questions in the theory of Los Angeles1 is who gets to meet with City officials to express their concerns and how and why they do. Why is it that some people have to rant and wave puppets during open public comment while councilmembers ignore them as they fool with their phones playing candy crush or swiping right on their staffies while others get all the face time they ask for, monthly breakfasts with the field staff, meetings, coffee dates, and so on? As with many such questions I certainly have my suspicions about the answer, but evidence has been hard to come by.

Leaving aside the case of zillionaires, who obviously get to meet just because they’re zillionaires, there was this one interesting episode from 2016 where scumbag cat-kicking K-Town slumlord Bryan Kim offered to donate a lot of money to Mitch O’Farrell for having arranged an encampment sweep and then wanted to meet with El Mitch and El Mitch’s consigliere Marisol Rodriguez was all like is he respectful because if so maybe a meeting would be a good idea because it would create the impression that Mitch cares about his constituents.2

This gave me the feeling that in order to meet with these people, in order to have them take one’s concerns seriously, it was at least necessary to be willing to observe some social boundaries, willing to play along, to take a seat at the table, to have concerns the addressing of which would in some way create some direct or indirect political advantage for the council office. This would be disconcerting but, I guess, understandable given the incentives under which City electeds labor.

However, I just recently obtained a string of emails between O’Farrell flunky slash Hollywood button man Dan Halden and a couple of really angry, really unhinged housedwellers which pretty much shoots that theory all to hell. These housedwellers, who are, incidentally, famed Grammy-winning Kanye producer Anthony Kilhoffer and his wife Amy Taylor, want some homeless human beings scraped off the sidewalks on Cole Avenue between Lexington and Santa Monica Boulevard in order to increase the value of their rental property and to soothe their offended aesthetic sensibilities.

Interestingly, once Taylor hears that Dan Halden is going to deal with the matter, she’s very careful to reassure him that she’s a loving human being. This is a super-common trope in this genre. I love all mankind, but I’m scared, so morality no longer applies:

I want you to understand that I empathize with the issues regarding those who cannot afford homes/shelters in Los Angeles. We are not heartless nor.are we blind to the adversities facing low income individuals in these times. But when it becomes an issue of safety, our children’s play spaces, and sanitation -then we need to act quickly and aggressively.

Kilhoffer is not respectful, he’s not willing to play along, he’s not even freaking coherent. He rants about piss, shit, drugs, pimps, how the City encourages encampments in order to drive down property values so they can “redevelop” his property. He insults Mitch O’Farrell’s attention to eliminating Columbus Day in Los Angeles.3 He insists that the people who are upsetting him aren’t even “real” homeless people, whatever that means and they’re not “respectful” like homeless people used to be a few years ago.

But Halden doesn’t ignore Kilhoffer, he doesn’t make cracks about him to his colleagues,4 he doesn’t even tell the guy to calm down and stop making up stories about prostitution rings being run out of tents on the sidewalk. No, he doesn’t do any of that. Instead he talks to the guy on the phone, he introduces the guy to neighborhood prosecutor Steve Houchin and various luminaries from the local Neighborhood Council, he arranges phone calls between the guy and supreme Hollywood cop Commander Cory Palka, and so on.

Most upsetting of all, Halden treats Kilhoffer as if he’s sane. He validates his psychotic concerns as if his ranting makes any freaking sense whatsoever, has any connection, however remote, with actual objective reality. It does not. Kilhoffer’s unhinged anger has obviously driven him to a place almost beyond moral judgment. He’s not competent to stand trial.5 Shunning is almost the only adequate response.6 On the other hand, Halden’s behavior is despicable beyond words and most certainly not beyond moral judgment.

Halden is a professional, his job is ostensibly to serve the people of the City rather than to single out angry dangerous lunatics like Anthony Kilhoffer for special attention and care, to amplify their psychosis and use it to guide policy. We don’t entrust him and his boss and the rest of their damnable ilk with our vast municipal power so they can use it against helpless human beings at the direction of demented psychopaths like Anthony Kilhoffer. He ought to be ashamed of himself, although experience has shown that whether or not he is his behavior won’t be affected by it.

Finally, after six months of Kilhoffer’s abuse and lunatic ravings, Halden finally actually arranges for a sweep of the encampment. In case you were wondering, that’s how encampment sweeps get scheduled in Los Angeles. Oh, and two months later the encampment was back and, I guess, the whole cycle begins again. And what’s the point? I have no idea.7

And, as I said, this episode leaves me utterly without a theory as to who gets these people’s time, in whom they invest their resources, what constituent concerns catch their attention. Anyway, turn the page for a transcription of selections from this utterly off the chain email conversation.
END_OF_DOCUMENT_TOKEN_TO_BE_REPLACED

Well, I don’t know how I missed it, but in January of this year, notre principale raison d’écrire, the famous Ms. Kerry Morrison, in response to this now also-famous L.A. Times editorial, penned a characteristically mendacious little missive to the local paper in support of anti-creep-crusading Councildude Mitch O’Farrell’s universally reviled initiative to ban adults in playgrounds in the City of Los Angeles.

Amazingly, every sentence in this letter is a lie. Here it is, see if you can spot them all. And after the break, I’ll deconstruct this peculiar little symptom of the acute Morrisonitis now endemic in what Ms. Kerry and her weirdo minions are pleased, for reasons known only to them, to refer to as “our little hamlet.”

To the editor: Constituents have contacted O’Farrell regarding the downward spiral of the only pocket park and playground in the heart of Hollywood. Families who live in our densely populated neighborhood used to enjoy the space. Now this tiny park has become a permanent encampment during the hours it is open.

Going there one day last week, I counted more than 20 people lying around the park. The grassy area was covered with sleeping bags and all the benches were taken. The adjacent playground was empty, despite being separated by a fence. This tiny park can no longer be used by families and organizations that could benefit from open space.

I applaud O’Farrell’s efforts to meet the needs of the neighborhood. This is what leaders do.