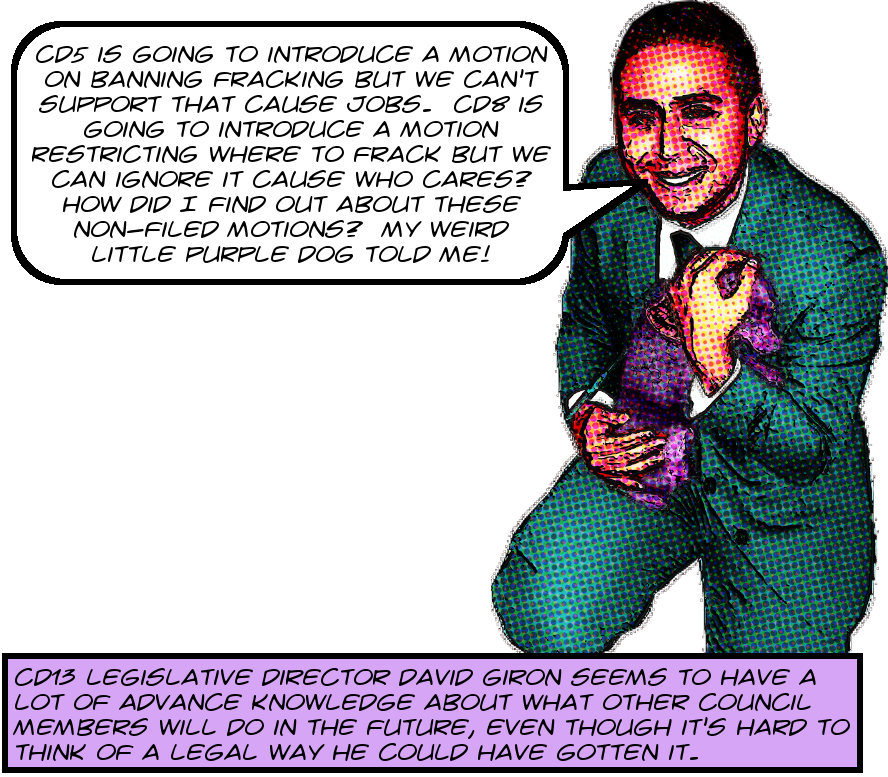 If you’ve ever attended a meeting of the Los Angeles City Council it’s very likely that you’ve seen one of the fully scripted performances that pass for debate with that body, ending, as always, with a unanimous vote in favor of yet another preordained conclusion. It’s a sickening spectacle, more worthy of a for-show-only parliament of some backwater bargain-bin Ruritanian dictatorship than of the legislators who are putatively leading our great City. This phenomenon is the subject of much discussion here in Los Angeles, and was the basis for at least one sadly ill-fated lawsuit.

If you haven’t seen an example of this spooky kabuki, you can take a look at this August 23, 2016 debate on whether the City should support or oppose some state bill about taxi regulation.1 After the break you’ll find a detailed chronology with links into the video, which will save you a lot of time because the whole thing is more than 30 minutes long and it is mind-numbing. There’s no conceivable way that episodes like this one could happen other than through prior discussion, collusion, and agreement among the Councilmembers. It’s completely implausible that it could be otherwise.

The problem with that, of course, is that prior discussion, collusion, and agreement among Councilmembers are illegal in California. It’s even illegal for Council staffers to discuss things and then report back to their bosses about other CMs’ opinions as reported by their respective staffs. The law mandates real public debates and forbids scripted performances whose conclusions are predetermined in back rooms. In particular, the Brown Act at §54952.2(b)(1) states explicitly that:

As far as I know there’s never been a successful Brown Act complaint against the City Council on these grounds. Courts will not, I’m under the impression, accept arguments based on the fact that it’s totally obvious what’s going on. Without sufficient proof of out-of-meeting communications no action is possible. And there just has not hitherto been any proof to be found, or none that I know of. But it appears that, buried deep within the recent release of emails from Mitch O’Farrell’s toppest secretest privatest email account, there are some hints of how this coordination might be accomplished.

There’s no proof there of a Brown Act violation, but there’s evidence that in 2013 David Giron, who is Mitch O’Farrell’s legislative director, coordinated with CD5 and CD8 regarding the positions of Paul Koretz and Bernard Parks2 with respect to fracking in Los Angeles and then communicated the intentions of those other CMs to Mitch O’Farrell. This is the kind of thing that the Brown Act forbids if it takes place among the majority of the Council, or even the majority of a Council committee.3

There’s no hint in the evidence that this discussion is any kind of anomaly, so it may be the first piece of the puzzle of how the City Council builds consensus out of view of the public. It certainly gives me hope that the truth will be brought out eventually.4 Take a look at the email exchange here, which is on the surface about Mitch O’Farrell’s position on CF 13-0002-S108, having to do with a State Senate bill on fracking. There are transcriptions and detailed discussion of the issues involved right after the break.

The story begins on August 30, 2013, when Mitch O’Farrell’s policy director, Christine Peters, sent an email to her colleagues5 proposing a position for Mitch O’Farrell to take on an upcoming vote having to do with supporting a bill in the State Senate about regulating fracking. She recommended that he support it:

So, the recommendation is to:

2 recent State bills to BAN fracking have failed. This Bill is well positioned to pass and has the support of the Governor. So when adopted, will advance regulations on public notices, permits, and details of chemicals used during the fracking process, and require scientific studies on the impacts of fracking on surrounding communities, and the environment.

The current area where fracking occurs is not in the City of LA but LA County. (Inglewood Oil). Impacts are felt in the Baldwin Hills area of Los Angeles. The regulations imposed by this bill will benefit those residents.

Further study of if and how fracking would be approved in the City of LA should be looked at, but not as part of this item. Instead separately. The impacts on CD 13 should be non-existent, as there are no known areas that would support this activity.

This is all fine, and I’m sure it happens all the time, as it should. What’s the point of a feckless idiot like Mitch O’Farrell even having a policy director if she’s not going to tell him how to vote on stuff and give him a few talking points to repeat to the press if anyone asks him questions that are too hard for him, which all of them not concerning his eyeglasses seem to be? However, David Giron, Mitch O’Farrell’s then-and-now legislative director, has to weigh in as well:

Additionally, CD 5 will introduce a MOTION calling for an outright BAN on fracking in LA-there are issues with that as some communities could likely have this type of work, and fracking in general is not likely to come to CD13. Although folks would generally be for NO fracking city wide, signing on to any MOTION to ban it without a thorough conversation in areas that we do not control should be closely scrutinized.

CD8 might also introduce a MOTION calling for zoning changes and regulations etc within the City limits-I.E. directing the Planning Department to look at having the planning code take into account fracking. It is recommended that we NOT sign on to this but allow it to run its course, it is likely to die in committee. This was discussed thoroughly by staff and the fact is we need the Planning Department to focus on the many issues that are before it, including our own initiatives and NOT fracking.

Star, please include these notes for the CM’s hotsheet on Tuesday.

And, interestingly, events unfolded almost precisely as David Giron foresaw. Four days after his email, on September 3, 2013, Bernard Parks, as I said above the then CD8 repster, introduced this motion in Council, which was ultimately filed under CF 13-1152 and which is about exactly what David Giron said it’d be about.

And two days after that, on September 5, 2013, CD5 (in concert with CD11, unforeseen by David Giron) introduced this motion, which was ultimately filed under CF 13-1152-S1 and which is also about exactly what David Giron said that it’d be about. Both of these matters ultimately did die in committee.

Which is not the real issue, though. The real issue, the real question, is who was David Giron talking to to find out this stuff? Probably it was his fellow legislative directors in the other Council Districts, right? And if so, why would it just be CD5 and CD8 telling CD13 what motions they were planning to introduce? Pretty clearly if they’re telling CD13 they’re telling all the CDs.

And if they’re telling staff from all the CDs what their bosses think about fracking, and then staff are reporting back to their own bosses about what those CMs think about fracking, well, it all adds up to a discussion and/or a deliberation via intermediaries on questions within the subject matter jurisdiction of the Council, which of course is against the freaking law.

But the existence of such discussions would surely explain the deterministic scripted character of City Council considerations of matters. And now that it’s clear who’s probably talking to whom about these things it might just be possible to request the right records via the CPRA. We’ll certainly see!

Chronology of a scripted debate:

Image of David Giron and his weird little purple dog is ©2018 MichaelKohlhaas.Org and it is fraternally related to his Twitter pix here.