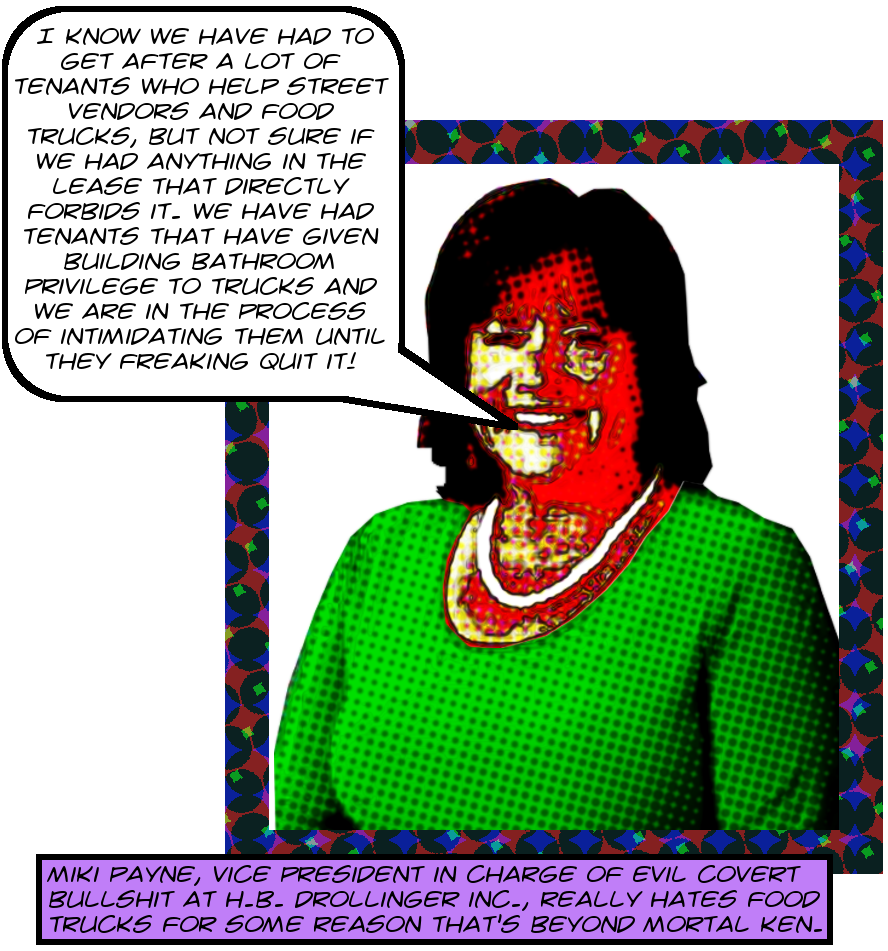 Turn the page for more ranting, along with links to and transcriptions of the emails, and also a special bonus item revealing an incident in 2011 when a businessman in Westchester allowed a food truck operator access to his restroom and was forced to publicly recant his permission and confess his sins after pressure from the BIDdies.
END_OF_DOCUMENT_TOKEN_TO_BE_REPLACED

Last month we reported on a fascinating situation wherein Hollywood Property Owners Alliance Board member Evan Kaizer didn’t understand the parking laws of the City he purports to be a citizen of, got himself a ticket on Hollywood Boulevard, and instead of just sucking it up and trying, in the future, to follow the freaking parking laws like everyone else he got Kerry Morrison to email freaking Seleta Reynolds, top turtle over at the Los Angeles Department of Transportation1 hinting around that NO FAIR!!

Well, the ticket didn’t get fixed,2 but Kerry Morrison, being the politically adept Machiavellianess that she is, began the process of straw-into-gold spinning for which she’s (justly?) famous when she asked Bruce Gillman, LADOT Communications Boss, about why didn’t food trucks, which, for some reason that we’re sure is clear to her and her theraputic team, she hates with a hatred that surpasseth understanding, get bunches of tickets for parking in the same place all day cause that’s also NO FAIR!!3 That all went down in March, but in his inimitably dogged manner, our faithful correspondent has continued to investigate, and he’s turned up a couple more emails on the subject. In particular, on June 20, 2016, a mere five days ago, Bruce Gillman wrote to Kerry Morrison, saying:

FYI: Regarding the issue of citing food trucks more often, or `escalating fines’ for repeat offender, the LAMC and CA CVC would have to be amended, as they limit citations for vehicles to one ticket per offense, per day. Looping in our Chief and Deputy Chief of Parking Enforcement: Greg Savelli and Brian Hale respectively.

END_OF_DOCUMENT_TOKEN_TO_BE_REPLACED

What would you do if you got a parking ticket for feeding the meter on Hollywood Boulevard? Pay it? Complain about it to your friends? Yell at the parking enforcement person? Not if you’re Evan Kaizer, President and CEO of the Sieroty Company! In that case you get your personal lobbyist and shill, Kerry Morrison, to email the freaking chief executive of LADOT, Seleta Reynolds, to complain on your behalf,1 hinting in her most inimitable manner that NO FAIR!!!!

Hi Seleta — it’s been awhile, [sic] but I thought I’d go straight to the top to find out who I can talk to for some information I can share with our community.

We recently moved into the middle of Hollywood Blvd — into a retail storefront. I hope you can stop by and see us sometime! We call this the “mid-BID”2 — and it’s the section of the Boulevard that still suffers from the doldrums.3

That said, we have a lot of meetings in our office, and in the past several of weeks,

[sic] we’ve had a couple of people get tickets for parking at a meter beyond the two hour timeframe. In these two cases, the person ran out to put a few more quarters in the meter to buy some time, and when they went out, there was a ticket for violating the two hour time. (So, it was not an expired meter.)4
Well, the big news here is not that zillionaires don’t know that meter feeding is illegal. Even a lot of non-zillionaires don’t know.5 The big news is not even that zillionaires are too cheap to park around back on Schrader or Cherokee for $10 like everyone else who’s going to hang around the Boulevard for more than two hours or that they’re too cheap to get their zillionaires’ club, the HPOA, to freaking validate parking for them. The big news is not even that Kerry Morrison somehow thinks it’s OK to involve the freaking General Manager of the freaking Los Angeles Freaking Department of Transportation in a freaking PARKING TICKET problem; zillionaires naturally think their problems are so sensitive and important that they can only be handled by the boss.

The big news, friends, is that Seleta Reynolds actually did handle the complaint. She instructed her subordinate, Bruce Gillman, to write to Kerry and smooth the ruffled feathers and so on. The tickets didn’t get fixed, and we suppose that marks some progress for this formerly corrupt city of ours, but emails were exchanged for over a month on the subject. How many parking ticket complaints made by non-zillionaires get that kind of sustained attention, we wonder. From now on, we’re writing to Seleta with all our parking ticket woes, and we encourage you to do the same, fellow Angelenos. Here’s her contact information:

You can tell her we sent you. Meanwhile, read below the fold to find out what this has to do with zillionaire paranoiac delusions about food trucks and more hypocrisy about small businesses.
END_OF_DOCUMENT_TOKEN_TO_BE_REPLACED

Due to some kind-hearted click bait1 bestowed by loyal FOMs Esotouric, my colleagues’ recent post on the resurgence of the long-dormant proposed Echo Park Business Improvement District has turned out to be one of our most popular posts of 2016. The colleagues left out some absolutely essential information and so I’m following up on their behalves. Also I used the whole situation as an excuse to ride the 704 Eastbound to Echo Park Avenue and Sunset Blvd. to check out the situation on the ground.

First the essential info: This thing is on the agenda for the Economic Development Committee meeting on Tuesday, May 10, in room 1010 in City Hall. You can go tell them what you think about it. Unfortunately I have other commitments, and I’m sure approval is a foregone conclusion, but there’s the info if you want it.

Second, as you can see from the images accompanying this post, if the BID’s approved a lot of stuff is going to change out there. They’re going to chase off taco trucks. BIDs hate taco trucks with a passion that’s hard to understand. They even, believe it or not, hate taco trucks parked on private property. Showing an astonishing ignorance of the rights of property owners in a free society, they’ve been known to express amazement that they’re not against the law.

If the BID is approved, sidewalk signs have got to go. BIDs freaking hate sidewalk signs. In fact, one of the very first things Kerry Morrison did in the 1990s after the Hollywood Entertainment District BID was established was to go after businesses with signs on the sidewalk. Why? Who the hell knows? It offended her sense of order or something. Why should Echo Park expect anything different.
END_OF_DOCUMENT_TOKEN_TO_BE_REPLACED