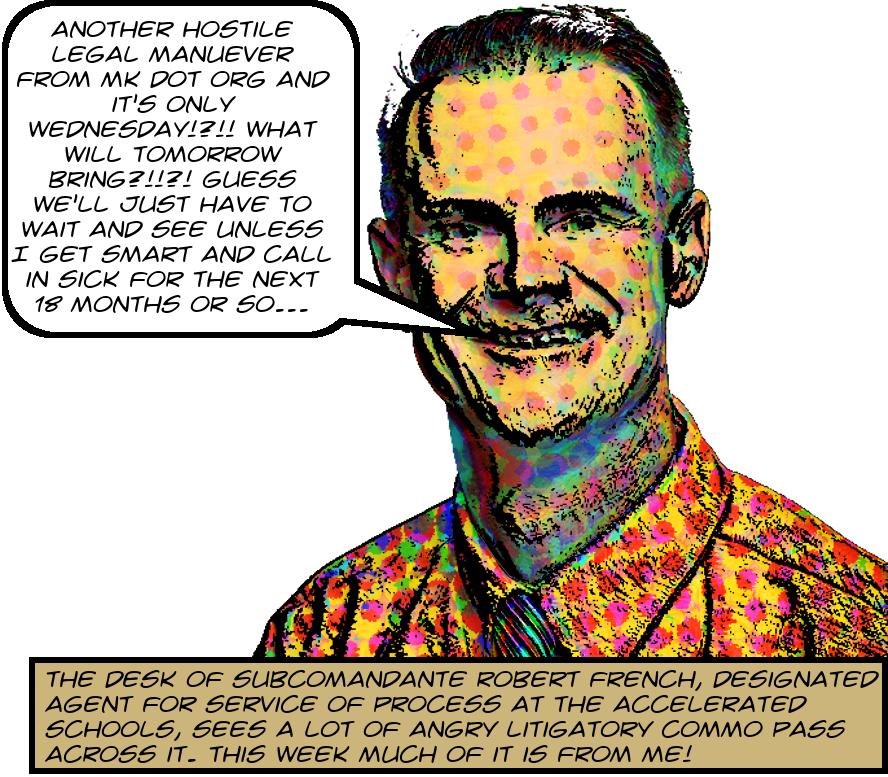 You might remember that in October that that white savior charter conspiracy, incidentally just yesterday served with a lawsuit seeking to enforce the California Public Records Act, known as The Accelerated Schools went and violated the Brown Act by requiring members of the public to sign in as a condition of attending their abortive board meeting, which was cut short by then-president Juli Quinn, acting impulsively in a fit of petulant rage at the insubordination1 of the audience.

Requiring people to sign in is forbidden by the Brown Act at § 54953.3 And you might also remember that one of the remedies for violations provided by the act2 is that a member of the public write to the violators requesting an unconditional commitment never in the future to violate the law in that particular manner.3 If they capitulate in the specified manner then there are extra consequences if they break their promise later. And if they don’t capitulate I get to sue them.

And finally, maybe you remember that last year I was sending a lot of these demand letters to business improvement districts. Priorities and lack of capacity forced me to lay that project aside for a while4 but it turns out, fortunately, that I have the resources to hold the tender toesies of some of these egregiously violating charter schools to the proverbial-ish flames, and thus, if you’re wondering, is the subject of this evening’s post this very letter right here, sent this very day to The Accelerated Schools, demanding that they stop with their nonsensical sign-in requirements. Now they have 30 days to give in or else!

The letter is transcribed below, but before we go there I just want to point out one important thing that was too qualitative to make it into the demand but is nevertheless really crucial. Here you can watch video of the incident which precipitated my demand. This is an employee of The Accelerated Schools telling me that I wasn’t required to sign my name to attend the meeting but rather was required to sign my name to enter the campus on which the meeting was held.

This same stupid distinction occurs to every single agency I’ve ever caught violating this particular part of the law. And just as consistently, once they get actual advice from an actual lawyer they always give in. Even the lawyers of the enemy can see it’s wrong. It couldn’t actually be correct because if it were the law would be meaningless. They could require members of the public to sign in to walk through the door into the meeting room and say it wasn’t required to attend the meeting, just to walk through the door.

Zillionaires and zillionaire-serving minions can get away with this kind of idiotic view of the law because for the most part the law is incredibly well-designed to serve their interests and it serves them incredibly effectively no matter what dumb stuff the zillionaires think is going on. But the Brown Act, for various reasons,7 doesn’t serve the immediate interests of some individual zillionaires/minions, so they regularly end up at the bottom of this particularly attractive8 pit of error. But here I am to pull them out of it! Stay tuned, as always, for details!

Transcription of the demand letter:

I am writing to you to demand that The Accelerated Schools cease and desist from violating the Brown Act as described below and to request that, in order to avoid costly and unnecessary litigation, you respond per the Brown Act at California Government Code §54960.2 with an unconditional commitment to so cease and desist.

1. Charter schools in California are private entities made subject to the Brown Act by state law and, for those authorised by the Los Angeles Unified School District, by the terms of their charter.

2. On October 24, 2019 I attended a public meeting subject to the Brown Act at The Accelerated Schools facility located at 3914 S. Main Street in Los Angeles, California.

3. I was informed by an employee of The Accelerated Schools that I was required to sign my name to a sheet in order to be admitted to the part of campus where the meeting was being held.

4. When I objected the employee stated that I was required to sign in to enter campus and that if I did not sign in I would not be allowed to attend the meeting.

6. On October 24, 2019 The Accelerated Schools violated the Brown Act at §54953.3 by holding a meeting in a facility which required people to sign in as a condition precedent to attendance at the meeting.

7. This violation is not just incidental, technical, nor harmless. Rather, it implicates fundamental constitutional rights that the people of California have reserved to themselves. The Brown Act at §54950 states:

8. By holding meetings in a facility entry to which is conditioned on signing in The Accelerated Schools deprives citizens of the fundamental constitutional right to participate anonymously in public meetings and to make anonymous public comments on the proceedings.

9. The Accelerated School’s failure to comply with the requirements of the Brown Act constitute a grave betrayal of both fundamental and consequential principles of our government. It is therefore in the best interest of all concerned that the school not only cease and desist from such violations in the future but that they make a public commitment to ceasing and desisting.

10. If The Accelerated Schools responds to this demand within 30 days of today’s date with a letter expressing an unconditional commitment to cease and desist from all future violations of this type in substantially the form given by the Brown Act at §54960.2(c) I will consider this matter at an end. Please send this letter to me by email at ■■■■■■■■■@■■■■■■■■■.org and by postal mail at:

11. If The Accelerated Schools refuses to so respond or so responds after 30 days have passed I will instruct my attorneys to proceed to “file an action to determine the applicability of this chapter to [the above-described] past actions” under §54960.2 of the Brown Act. If I prevail in that action the Brown Act at §54960.5 allows for the court to award costs and reasonable attorneys’ fees to me.

Image of Robert French is ©2019 MichaelKohlhaas.Org and is some kinda homage de fromage to this French over here.