December 31, 2018 was now-convicted felon Mitchell Englander’s last day on the Los Angeles City Council. He was all like “I am stepping down for a once in a lifetime career blah blah blah” but of course he was getting out ahead of his arrest, exposure, conviction, and sentencing for corruption. The impending disgrace, however, didn’t stop his zillionaire cronies from cushioning his landing with job offers and fancy lunches.

Most famously, of course, on January 1, 2019 he started his new career with the Oak View Group, which is a Los Angeles based “global advisory, development and investment company for the sports and live entertainment industries.” In other words, a perfect landing spot for an as-yet-unindicted former politician. Nothing hurts these politicos more than being forced out of the inner circles of power, though, and making a zillion dollars a year as a lobbyist doesn’t quite fill the kind of ego void created by public disgrace.1

And unhinged typewriter fetishist and perpetual inner power circle dweller Steve Soboroff, at that time president of the Los Angeles Police Commission, apparently understood this quite well. Which is probably why, on January 31, 2019, Soboroff fired off an email to Hollywood power lawyer Warren Dern, also a member of the Board of Directors of the Los Angeles Police Foundation:
END_OF_DOCUMENT_TOKEN_TO_BE_REPLACED 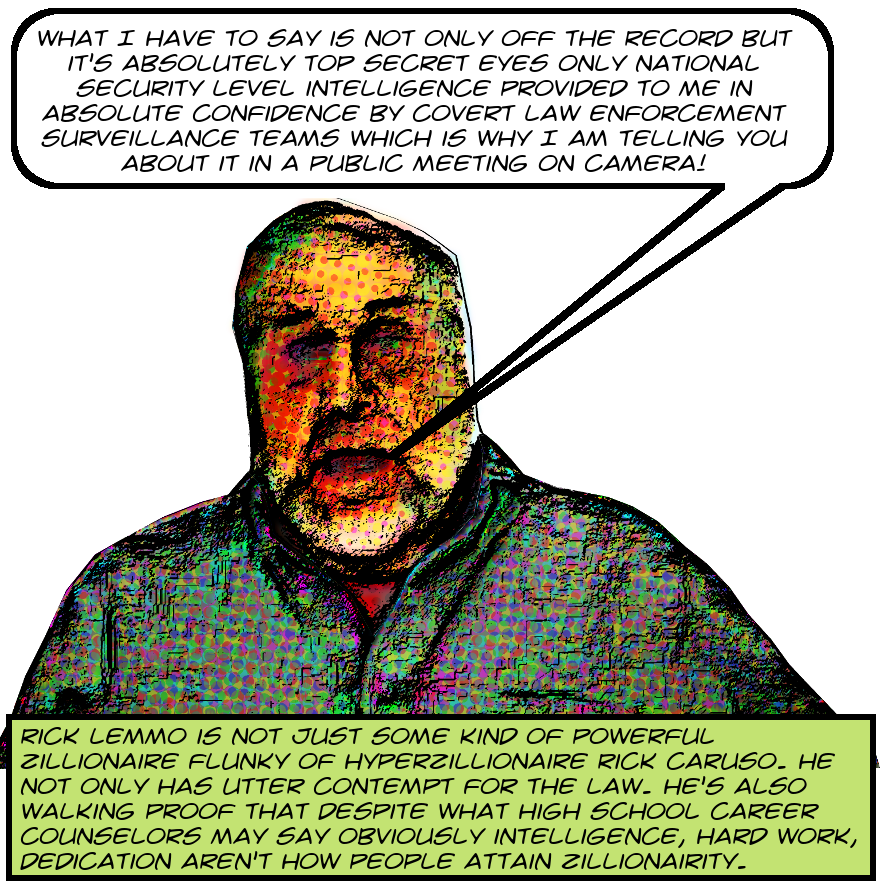 Can I just say that Rick Lemmo is a moronic lying narcissistic zillionaire bootlicking authoritarian poobutt blundering weirdo? In any case, this dude, who I forgot to say is some kind of flunky employee of Rick Caruso and also runs the Pacific Palisades BID, presided this morning over a meeting of the BID’s board of directors, and you can watch the whole damn thing on YouTube if you’re interested.1 And they talked about the usual array of trivial crapola with which these backwater zillionaire BIDdies seem to be obsessed.

But also Lemmo went on an extended rant about violent looters poised to overrun the three most vulnerable areas in Los Angeles County today. He revealed that his top secret sources in “security” and “law enforcement” had blessed him with this information and also told him not to worry because they had plans to occupy the contested territories immediately if there were any threat at all to property.2 And in one of the most curiously stupid episodes I’ve ever experienced at a BID meeting, Lemmo told everyone that his rant was off the record, not available to the press, and not for attribution to him.

He said this in public. At a public meeting. In front of a freaking camera. What was he thinking, if anything?3 These three most especially extra threatened areas, if you’re curious, are Brentwood, Beverly Hills, and the Pacific Palisades. Those are the essential zillionaire strongholds which must be defended at all costs against the marauders. In case you’re wondering, Lemmo’s top secret sources in “law enforcement” have “identified a variety of criminal groups that utilize peaceful protestors as a smokescreen for them to loot businesses and promote violence.”

And not only that but “LAPD and National Guard are fully aware of the situation and prepared to fully deploy in and around these areas and protect them based upon whatever up to date intelligence they receive from the unrest.” Then there’s Lemmo’s zillionaire-specific version of the appalling all lives matter trope: “all business areas are small business areas.” And his overflowing abundance of whack-job paranoia: “And purpose of this statement is to let you that there is a lot more out there than what is visible to us from a protection standpoint and also unfortunately from a criminal element.”

There was more interesting stuff at the meeting, it’s worth a watch. And as usual the craziness speaks for itself better than I can speak for it. Read on for a transcription of Lemmo’s lunacy!
END_OF_DOCUMENT_TOKEN_TO_BE_REPLACED


Well, we put our fearless correspondent on the case and he went out and got us a copy of this letter. As is usual with Kerry when she’s writing in this genre, outraged-with-veneer-of-politesse-and-diplomacy white supremacism, the letter manages to combine utterly competent, even stylish, syntax with semantics that wouldn’t have been out of place in a 1970-era Ronald Reagan psychotic fever dream about students running wild in the streets of Berkeley. Read on for details and more!
END_OF_DOCUMENT_TOKEN_TO_BE_REPLACED