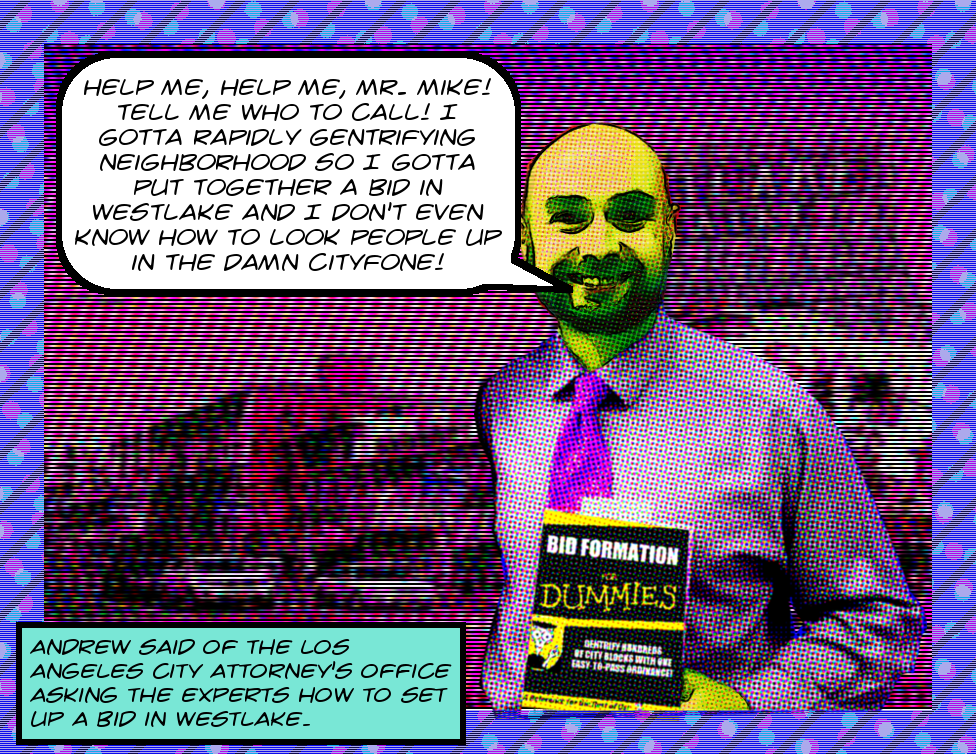 It’s well known in the anti-BID community that the City of Los Angeles is fully committed to the completely false story that a BIDs is formed by a spontaneous upswelling of property owners, uninfluenced by the City and completely outside of the City’s power to direct. Of course, as I said, this is a lie, and there’s plenty of evidence that it is a lie. State law not only gives the City the absolute right to determine everything BIDs do with their money but the City is not shy about exercising this right when necessary.

And there are plenty of concrete proofs that it’s actually the City of Los Angeles that creates BIDs. From then-CD13-rep Jackie Goldberg’s tireless efforts to form a BID in Hollywood in the mid 1990s to Eric Garcetti’s and Mitch O’Farrell’s almost decade-long quest to put together a BID in Echo Park to CD9 repster Curren Price’s strongarmed extortion of a South LA car dealership to get seed money for a BID along MLK Blvd. to CD11 rep Mike Bonin’s mendacious little flunky Debbie Dyner Harris’s multi-year involvement with the Venice Beach BID formation effort, the City is the motivating force, I’d venture, for every damn BID we have now and are gonna have in the future.

But every case I know of has involved the local Council District. This isn’t just my imagination, either. It’s reflected in these BID formation guidelines, published by the Los Angeles City Clerk‘s BID office, which state unequivocally that the BID formation process begins when: An individual, or a group of individuals (“proponent group”), or a Councilmember, desires to investigate the possibility of establishing a BID in a given area.

Consequently, what a surprise it was to find a set of emails between Andrew Said, who is neighborhood prosecutor for the Rampart Division, and Mike Russell, director of the Wilshire Center BID, which feature Andrew Said asking for Mr. Mike’s advice on how to start a BID in Westlake. The emails, which are part of a larger set I received yesterday,1 are available here on Archive.Org. Turn the page for transcriptions and some more discussion of what this might mean.
END_OF_DOCUMENT_TOKEN_TO_BE_REPLACED