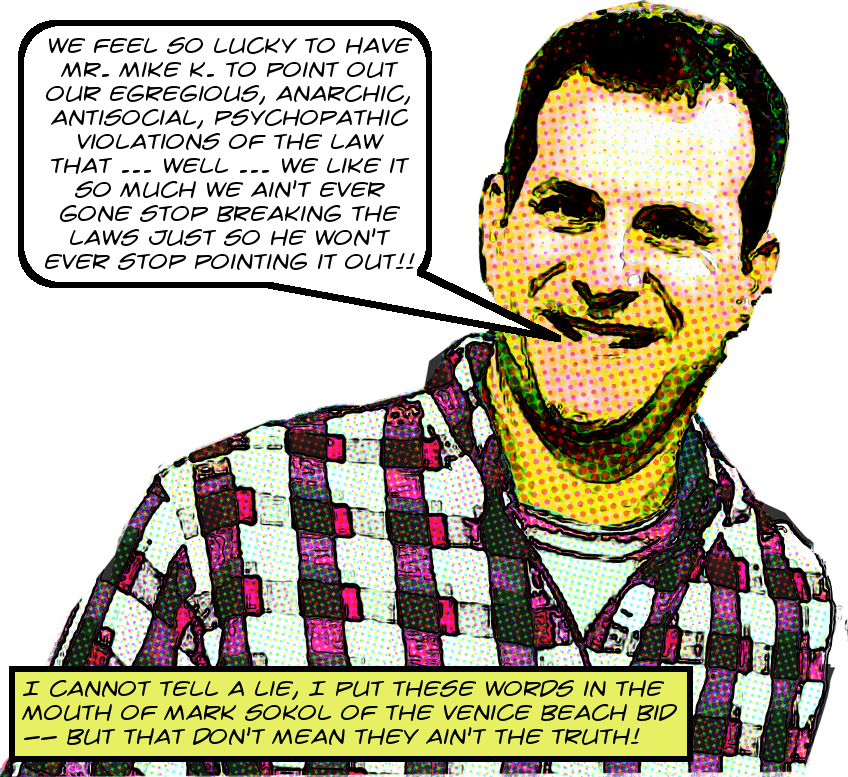 We’ve seen over and over and over again that for the life of them the business improvement districts of Los Angeles just cannot follow the damn Brown Act. There was that time in February when the South Park BID messed up their agenda and then revised it cause I said to, and then there was that other time when the South Parkies messed up their teleconferencing methodology and now they don’t even offer teleconferencing any more cause I pointed out their violation.

And a favorite topic of conversation around the campfire here at MK Dot Org secret headquarters is why it is that the BIDs, who have all the money and all the lawyers that anyone who was inclined to follow the law might need to allow them to do so, nevertheless can’t get this simple thing right. Over and over and over again they violate the Brown Act. We don’t have any definitive answers for you,1 but maybe it’s comforting to know we’re talking about it?

And this very morning, friends, the Venice Beach BID became the latest to join this illustrious roster. Turn the page for the lurid details!

Closed Session
The Board shall recess to Closed Session, pursuant to Government Code §54956.9(d) to confer with its legal counsel relative to issues involving existing and/or potential litigation.

And this description must be informative enough to allow members of the public to determine if they care to attend the meeting and/or comment publicly. Also, if they’re going to talk about existing litigation, they have to tell who the parties are, according to §54954.5(c), the approved agenda description is:

With respect to every item of business to be discussed in closed session pursuant to Section 54956.9:

Name of case: (Specify by reference to claimant’s name, names of parties, case or claim numbers)

So anyway, I sent the whole cannibal crew an email this morning at 7:46 a.m. explaining the problem:

From: mike@michaelkohlhaas.org
To: Admin Istrator

Thanks in advance for remedying this serious matter.

There’s a twist here, too. See, the meeting is scheduled for Wednesday at 10 a.m. They’re required by the Brown Act (at §54954.2(a)(1), quoted above) to announce agenda items 72 hours in advance. Thus before 10 a.m. this morning, that is. Well, imagine my surprise when at 9:57 a.m. this morning, with only three minutes to spare, Tara Devine sent around a revised agenda meeting every last one of my demands! Here’s the new description:

Closed Session
The Board shall recess to Closed Session, pursuant to Government Code § 54956.9(d) to confer with its legal counsel relative to issues involving existing litigation (Mike vs. Venice Beach Property Owners Association.)

I tell you, friends, I’m never going to get tired of this game! And as far as I can tell, the BIDs of Los Angeles are never going to be able to follow the Brown Act, so everyone wins! I mean, everyone but the people of the state of California, who are being denied adequate access to these BIDdies’ meetings. But I’m working on it, I swear!

Image of Mark “the Shark” Sokol is ©2018 by Mike “the Psych” Kohlhaas and contains about 3% of the original pixels of this old thing right here.