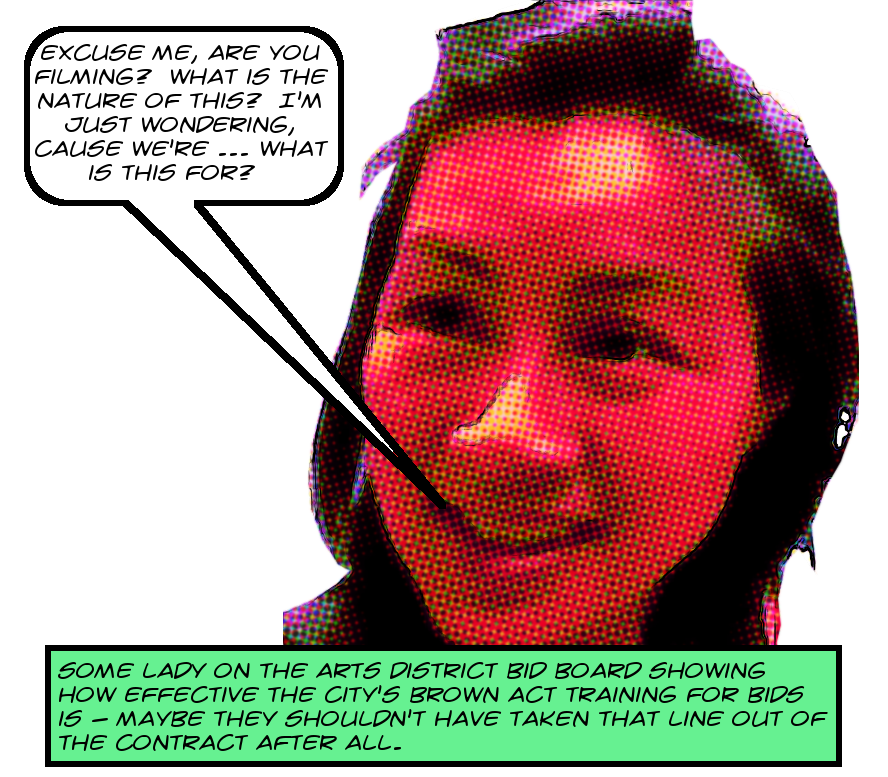 Yesterday I paid my first visit to the Arts District BID board of directors. You can find the video here on YouTube and here on Archive.Org. Now, this BID is a fascinating and unique BIDdological case study due to its 2011 dissolution and entirely anomalous re-establishment in 2012, which involved creepy unethical subterfuge by City BID boss Miranda Paster and underhanded interventions by the whole weirdo panoply of the Downtown zillionaire power elite including, but never ever limited to, the zillion dollar woman herself.

But none of that rich and textured1 history was on display yesterday. No cracking of the bones of the homeless to greedily suck their marrow, no complaining about the skin color of the neighborhood’s non-zillionaires, no comparing groups of non-white people to caged animals. In short, none of the spectacularly white supremacist fireworks which sometimes burst forth to dazzle and bemuse sane onlookers.2

As I said, it was a quite ordinary BID meeting. But as ordinary as it was, it nevertheless displayed a wide variety of low-key instances of the usual BIDdie tropes. We had zillionaires laughing about how the City is not only able but willing to overturn any given development restriction on request. We had zillionaire anxiety about my filming, this time manifesting in a board member quietly confronting me on camera and then checking with the Arts District’s twittery little twerp of an Executive Director, Miguel Vargas.3

We had zillionaires casually going off-agenda, poised to violate the Brown Act, be pulled back from the brink by an alert colleague. We had, as I said, the usual zillionaire jive. And it’s nevertheless fascinating. Turn the page to links and brief transcriptions of a few moments that I found worth noting.

Let’s kick things off with Linda Dishman from L.A. Conservancy. She spoke to the board, starting here, for what seemed like 20 minutes, about a proposed TFAR4 program they’re working on to help preserve the historic character of the Arts District. They’re proposing that owners would be able to sell their right to build taller buildings for 35 years, but after that the right would revert to the property.

The owners tossed this around like a pack of hyenas playing with the week-old corpse of a gazelle for a while and then someone5 realized that probably a few thousand dollars spread around amongst the correct politicians could well let them eat their cake and build a tall building too. As a board member put it, “You can always apply to the City for whatever you want. We know that.” Indeed you can always apply, zillionaires. Indeed you do know that. Point freaking taken.

And then a couple of nervous board members noticed that I was recording. You can see them conferring about it here (they’re the second and third women from the right at the table). One of them even came over to interrogate me about it. Watch here. My policy under such circumstances is to keep schtum and that’s what I did.

So then she went over to his high twerpsitudinous majesty, Miguel Vargas, to ask if I couldn’t be tased, beaten, and summarily ejected, or whatever the punishment du jour for making zillionaires uneasy might be. Evidently he was more familiar than she with the Brown Act at §54953.5(a):

Next up, a fairly innocuous presentation from Tim Harter, late of Richard Bloom‘s office but now shilling for Santa Monica based disruptive blah-de-blah-blah-blah corporation Bird Scooters, newly open for business in the Arts District. Watch it starting here. Now, here’s a quiz. What’s the first thing you think of when you hear Bird Scooters in the Arts District? Me, I think intoxicated trustafarians crashing into brightly painted brick walls. You, well, I don’t know.

But unless you’re a zillionaire, I doubt it’s going to be homeless people stealing the damn scooters: “My concern is that given our neighborhood and the homeless population in this area that they’ll just be picked up and walked away with. “ Zillionaire logic is not always easy to follow. On the one hand you have homeless people struggling to charge their phones, which are a necessary tool for street survival. On the other hand you have people who actually have a place to live that’s wired for electricity. Who do you think is more likely to steal a damn scooter that can only go 15 miles without a charge?6 It makes me want to quote F. Scott Fitzgerald yet again, but I’ll resist.

Oh, what’s next! Well, cop a listen to this lady here. She wants to talk about a parking garage. Never mind what about it. It’s too tedious to think about. But here’s one agenda and here’s the other agenda.7 Nary a word on there about a parking lot, is there? Which is precisely why some genius pointed out that it wasn’t on the agenda and they could talk about it later. That guy at least is probably familiar with the Brown Act at §54954.2(a)(3), which states unequivocally that: “No action or discussion shall be undertaken on any item not appearing on the posted agenda.”

And what else? Well, a ton of the usual bitching and moaning about rising crime rates. Everybody’s apartment is always being broken into by homeless people all the time. Ten times a week PER BUILDING! This despite the fact that the liaison guy the LAPD sent over had precisely zero crimes to report.

If one were to believe BIDdies crime rates are always worse than they were last year, but they’re always lower than they were right before the BID started. Everything’s getting worse and getting better all at the same time. It’s like every day’s a new day with these people. It wears me out, which is why I’m signing off, friends!8

Image of unidentified Arts District BID board member is ©2018 MichaelKohlhaas.Org.