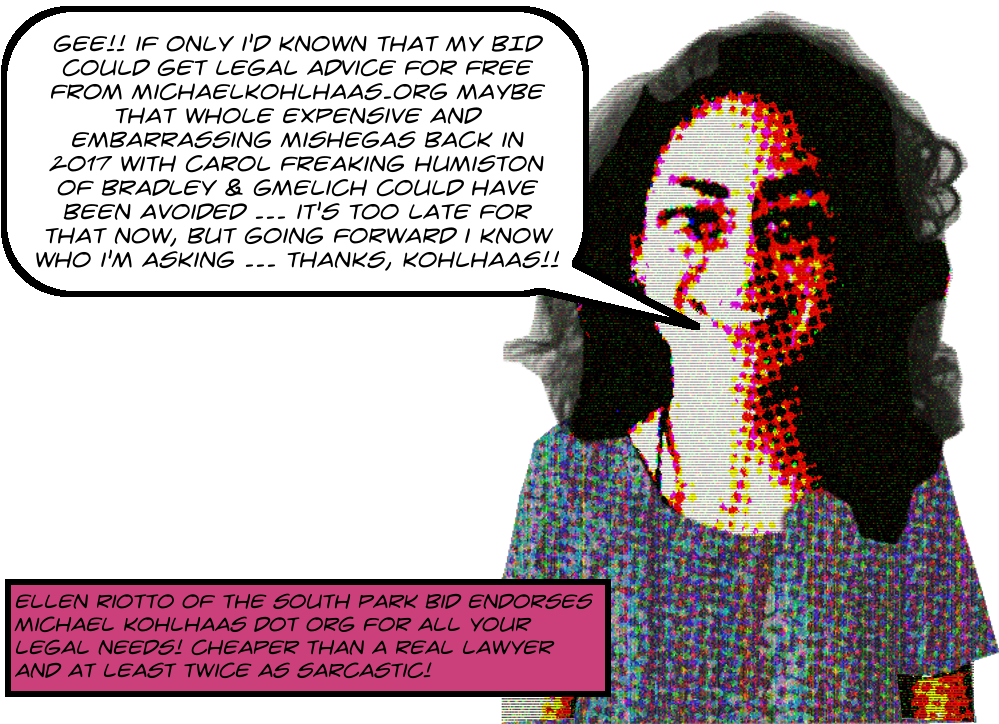 The Brown Act contains many wonderful treasures, but one of the wonderfullest is to be found at §54954.1, which states unambiguously that:

I ask many of my BID friends to send me these notifications and their agenda packets. It really seems to piss most of them off.1 I don’t feel bad for asking BIDs to comply with the law, though. After all, it’s voluntary on their part and they’re making an awful damn lot of money out of it.

So anyway, our friends at the South Park BID are reasonably cooperative about complying with the law. They invited me to sign up for their public mailing list, which I did. It’s an open question as to whether this is compliance, since the law requires notifications to be sent at the time that the board receives them, but this presently seems too minor to quibble over. On the other hand they spout an awful lot of spam through that account, and clearly I shouldn’t be required to sort through the junk just to be able to receive notifications that they’re legally mandated to send. Again, though, this is an argument for another day.

However, it turns out that the South Park BID does distribute packets to its board of directors in advance of the meetings and also that those are not available via the public mailing list. I only found out about this recently, so I wrote to the BID boss ladies and asked them to send them goodies my way!

After some nonsense with them interrogating me mercilessly about which email address I wanted the board packets sent to,2 we got all the details ironed out. And after that, my friends, it must follow, as the night the day, that I ended up sending Ellen Riotto some of my sage legal advice and, amazingly, she ended up taking it!3 Read on for the details and a bunch of emails!

And then she emailed me back at 7:05 p.m. yesterday evening, and here is the email she sent me and here is what it said:

Dear Members of the Board,

In preparation for Thursday’s meeting, please click here to access your Board packets. Please let me know if you have any issues with the link.

A map is included in the packet. I’m still determining if we will have parking and will let you know ASAP.

It’s interesting to note that the click here leads to a Dropbox directory with all the relevant records.4 And in case that’s offline by the time you’re reading this, I uploaded all the contents to Archive.Org. I haven’t had time to read most of the junk in there yet5 but one item that really stood out was the agenda for tomorrow‘s meeting.6

First of all, note that the meeting is scheduled to start at 8:30 a.m. Also take a look at item 11 which reads, in its inglorious entirety: “11. Closed Session”. Now, I don’t know much in this world, but I do know the Brown Act pretty well, and I can tell you right now that this kind of top-secretive jive is strictly verboten. In particular, §54954.2(a)(1) states unequivocally that

At least 72 hours before a regular meeting, the legislative body of the local agency, or its designee, shall post an agenda containing a brief general description of each item of business to be transacted or discussed at the meeting, including items to be discussed in closed session.

In other words, it’s actually illegal in California for an agency subject to the Brown Act to have a closed session and not say on the agenda more or less what they’re gonna be discussing behind those closed doors. And the statement of what it’s about must generally be published 72 hours before the meeting. This means that last night was too late! So look, I do want to abolish business improvement districts in California. And I think that a reasonable strategy for doing this is watching them super-closely to see if they violate the law. Violations can have drastic consequences for BIDs.

But on the other hand, it’s really bush league to complain about matters like this one, which is obviously a mistake rather than a conspiracy.7 Hence I fired off a friendly little note to Ellen Riotto and manic minion Katie Kiefer. Note that this was at 7:16 p.m. And, because I just roll that way, I even offered them a solution. Call the closed session part of the meeting special. Then §54956 kicks in, which only requires 24 hours notice8 and would therefore give them until 8:30 a.m. this morning. Here is what the email said:

Thanks so much, SP friends!

Of course, your agenda contains no description of what you’re planning to discuss in your closed session. My feeling, and it’s a pretty well informed feeling, is that, therefore, it would be illegal for you to go ahead with this closed session, whatever the topic might be. Since the meeting is less than 72 hours away it’s too late to amend your agenda.

On the other hand, I notice that when the City of Los Angeles messes up like this, they will generally just announce a special meeting, called as part of their regular meeting, and publish a separate agenda just for that part. Probably you all could do the same.

On the other other hand, obviously it’s not good policy to take legal advice from internet randoms like me. Probably you will want to check it out with your own lawyer. Clearly you have until 8:30 tomorrow morning to call a special meeting, so there’s still time for that. Please don’t forget to send me a copy of the agenda should you choose to do this.

Thanks again for the packet!

P.s. it’s nice to see that you use Dropbox in the ordinary conduct of your business and that you will occasionally even use it, on a whim, I guess, to transfer files to me, of all people. This is important information!

And really, I thought that was going to be the end of it, that they would go ahead and break the law because fuck you humanity, and that I wouldn’t be able to turn them in to the L.A. County D.A.’s public integrity unit like I did recently with the Los Feliz Village BID because I wouldn’t have been there to witness the violation.

So imagine my surprise when this little nuggins hit my inbox this morning at precisely 8:30 a.m., announcing a meeting called special!9 The email said:

Please see here for the agenda for the special meeting: https://southpark.la/wp-content/uploads/2018/02/180222-BOD-Special-Mtg-Agenda.pdf

Note that in case that link dies at some point you can also get a copy from Archive.Org. And lo! And behold!! They did exactly what I recommended and called a special meeting for their closed session and provided a Brown-Act-compliant description:

Hey Carol Humiston!! How you like me now??! Who’s giving your clients good advice, eh? Lucky someone’s paying attention! Or they’d be going down the proverbial tubes tomorrow morning and no damn thanks to you!! And I will keep paying attention, never fear!10

Image of Ellen Riotto is ©2018 MichaelKohlhaas.Org and is all messed up from this thing here.