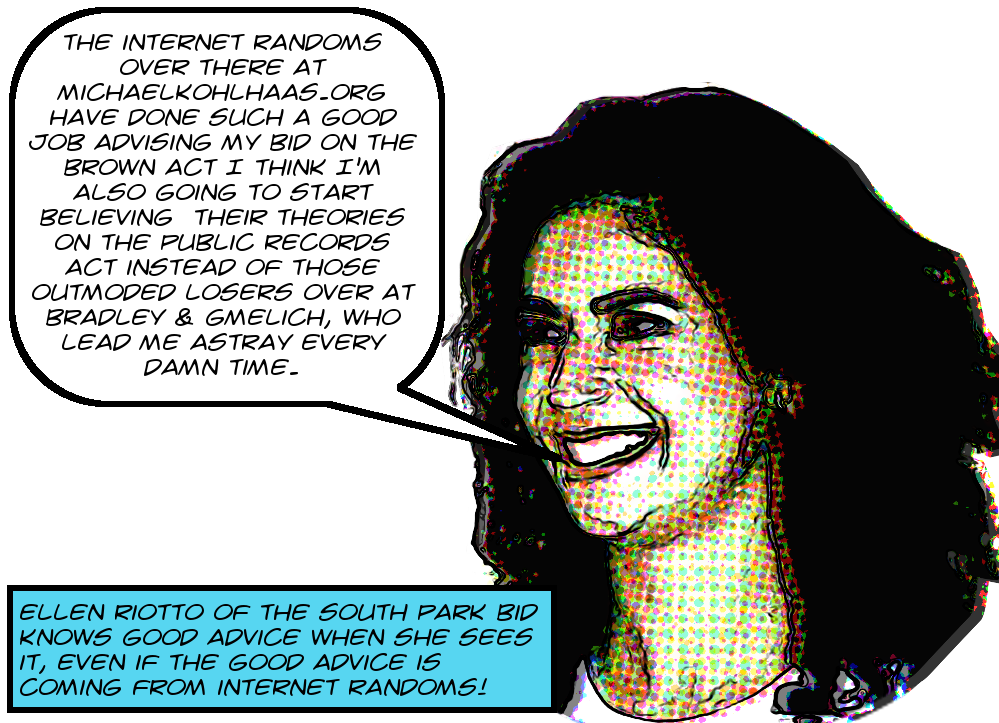 It seems like forever ago by now, but maybe you recall that in February the South Parkers sent around an agenda announcing a closed session that was so freaking out of compliance with the Brown Act that I could not, despite mom’s best advice, keep my mouth shut. Thus I emailed the Parkies and hilarity and agenda revisions ensued!

Well, these Southies have another meeting coming up this very Thursday, and imagine my joy when I received a copy of the agenda! And imagine my horror when I noticed the bit about teleconferencing! Here’s what it said:

Please notify Katie Kiefer. Director of Operations, at least 48-hours in advance if you will be dialing in. Contact her via email, Katie@SouthPark.LA, or by phone, (213) 663-1120.

Also, the Brown Act at §54953.3 forbids local agencies1 to require members of the public to identify themselves as a condition of attending the meeting. This made me pretty sure that the BID’s requiring would-be teleconferencers to register their names with Ellen Riotto’s manic minion Katie Kiefer was another violation.

So anyway, usually I would just wait around for the BIDdies to actually break the damn law and then turn them in to the Public Integrity Division of the Los Angeles County District Attorney like I did with the Los Felizites and more recently with the Central City East Association. But it was so entertaining the last time I warned them and they actually took my advice that I thought I’d give that another try.

NOTE: Teleconferencing into this meeting will not be enabled.

So woo-freaking-hoo, amirite?! Turn the page for transcriptions of the emails.

Transcription of my email to South Park about impending Brown Act violations:

I see that you all allow participants in your board meetings to use teleconferencing. I’m concerned that the manner in which you do this violates the Brown Act insofar as you don’t have specified teleconferencing locations and, potentially, that you seem to require people who want to participate via teleconference to identify themselves to Katie Kiefer in order to do so.

The first issue is a clear violation of the Brown Act at section 54953(a)(3), which requires specific locations where the public can participate via teleconference and it requires those locations to be named in the agenda and open to the public. Your agenda doesn’t specify any teleconferencing locations.

The second is not so clearly a violation, but it seems likely that requiring people who participate via teleconference to identify themselves would run afoul of section 54953.3, which states clearly that “[a] member of the public shall not be required, as a condition to attendance at a meeting of a legislative body of a local agency, to register his or her name, to provide other information, to complete a questionnaire, or otherwise to fulfill any condition precedent to his or her attendance.”

The League of California Cities has published an extraordinarily useful guide to complying with the Brown Act with respect to teleconferencing, which you may find helpful:

Also, I’m told that the City Clerk’s office, despite statements to the contrary, will advise BIDs on Brown Act compliance, so they’re potentially another resource for you.

Thanks for your attention to this important matter,

Thank you, Mike. We will be issuing an amended agenda.

Image of Ellen Riotto is ©2018 MichaelKohlhaas.Org and is mashed up outta this CORO thingie right here.