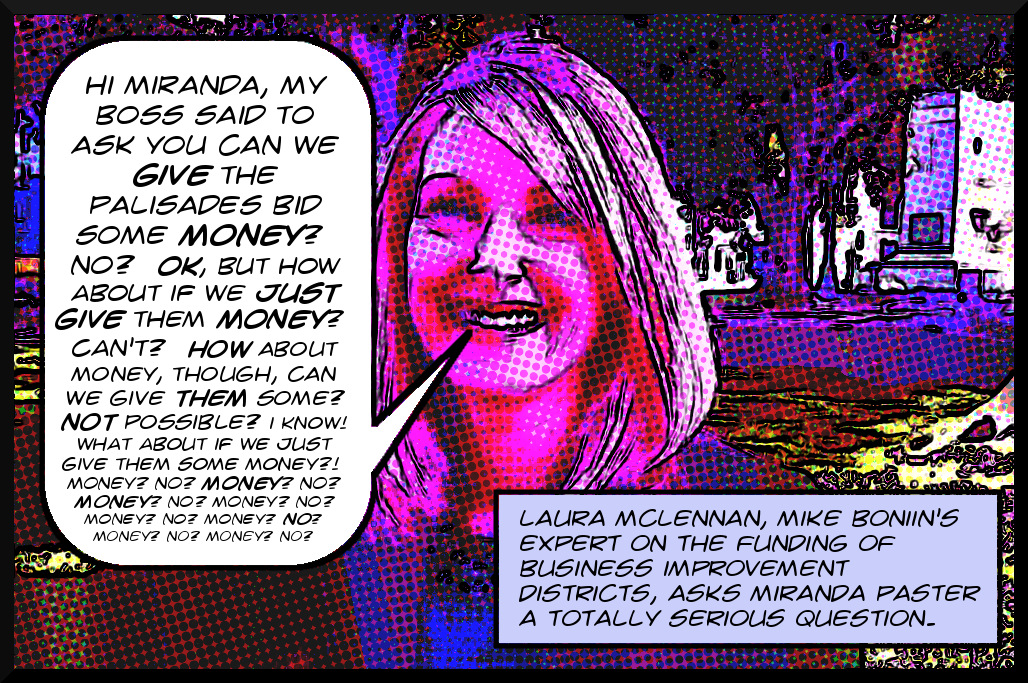 This chain of emails from December 2015 reveals that the Pacific Palisades Business Improvement District paid Urban Place Consulting $21,000 for guiding the establishment process and an additional $4,000 to the consulting engineer.1 This is yet another piece of the BID consultancy puzzle that I’ve been trying to decipher since it became clear that almost certainly BID consulting qualified as lobbying under the Municipal Lobbying Ordinance and that almost all of the qualified consultants were breaking the law by not being registered with the City Ethics Commission like, e.g., Tara Devine.2

And this small piece of evidence is especially valuable given the fact that by now it’s essentially impossible to coax records out of the Palisades BID. They’ve even hired a lawyer specifically to thwart my requests, as if the bred-in-the-bone intransigence3 of PPBID ED Laurie Sale, which presumably they’ve already paid for, weren’t enough in itself.

In particular, because we already knew that Urban Place was charging the Fashion District $55,000 for renewal consulting and because it’s the first time we’ve known the rates that a single consultant is charging two different BIDs, it’s possible for the first time to attempt to model UPC’s fee structure. The gory details are available after the break, but the upshot it’s possible to estimate that UPC’s baseline fee for establishing/renewing an ideal BID with zero parcels in it is about $19,583 and that each additional parcel adds a little more than $18 to the cost of establishing/renewing the BID.
END_OF_DOCUMENT_TOKEN_TO_BE_REPLACED