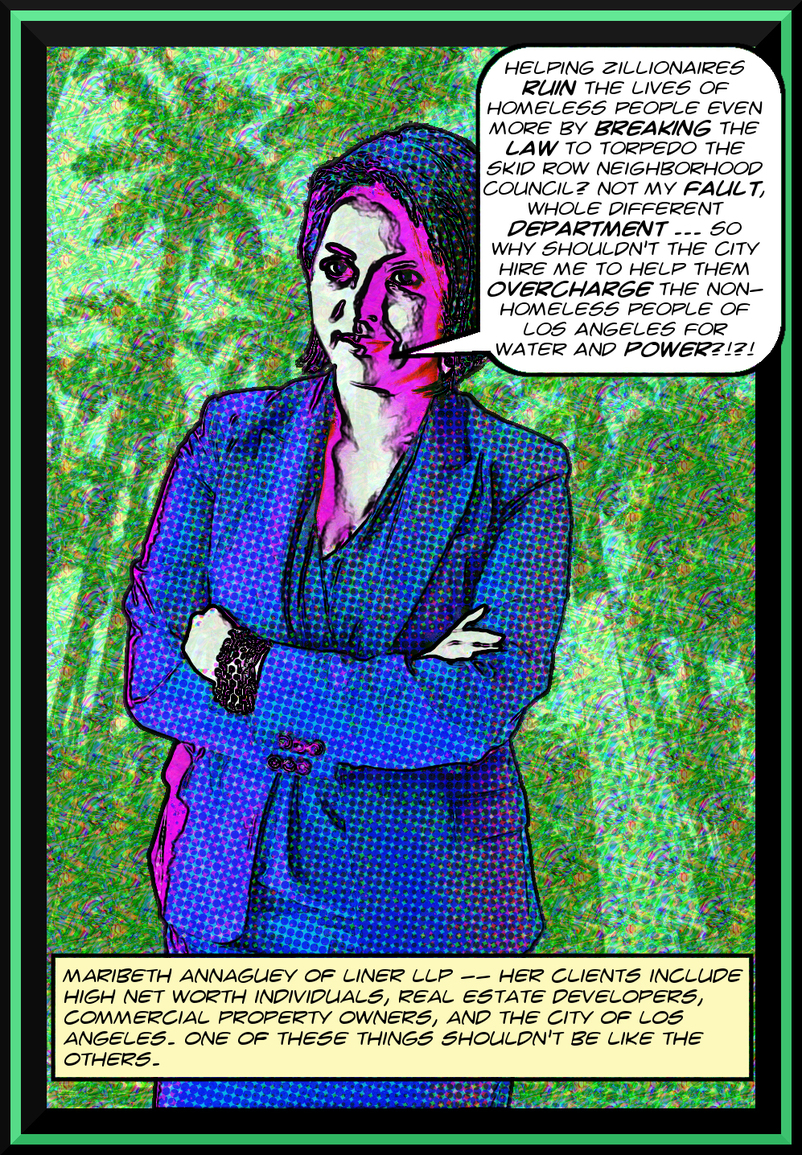 Powerhouse zillionaire litigation and lobbying firm Liner LLP has come up a lot around here recently, mostly due to the fact that shady anonymous Delaware-registered probably-a-front-for-Capital-Foresight shell corporation United DTLA hired Liner, and specifically ethically challenged non-lobbyist Liner partner Rockard Delgadillo, to violate a bunch of laws in the course of convincing1 suprisingly humanlike CD14 repster Jose Huizar to change up all the rules at the last minute in a truly shameless yet tragically successful effort to torpedo the recent Skid Row Neighborhood Council formation effort.

So what a surprise it was to see Liner LLP come up in yesterday’s crop of automated emails from the City Clerk,2 specifically here in Council File 17-0648. It turns out that Liner has been acting as outside defense counsel for the City in the recently settled DWP class action lawsuit. According to this letter from DWP to the City Council they have blown through the original allocation of $4,800,000 and need another $1,622,200 to finish the job. To do this they evidently need the Council to adopt this amendment to the contract, and the issue is on the calendar for June 30.
END_OF_DOCUMENT_TOKEN_TO_BE_REPLACED

Last month I learned that the San Pedro BID was paying Edward Henning $20,000 to handle their BID renewal process. This discovery was independently interesting, but also important for my ongoing research project of learning everything possible about BID consultancy with the ultimate goal of shopping as many BID consultants to the City Ethics Commission as possible, mostly for violations of LAMC §48.07, which requires that “[a]n individual who qualifies as a lobbyist shall register with the City Ethics Commission within 10 days after the end of the calendar month in which the individual qualifies as a lobbyist.”

In this clause, someone “qualifies as a lobbyist” when they, according to LAMC §48.02 are “compensated to spend 30 or more hours in any consecutive three-month period engaged in lobbying activities.”1 Note that today I’m mostly skipping the argument that BID consultancy qualifies as lobbying activities, but you can read about it in excruciating detail here.

Part of the evidence that I obtained last month were these two invoices from Edward Henning to the SPHWBID. As you can see, they span the time period from March 2016 through December 12, 2016 and bill for a total of 75 hours. That’s roughly 7.5 hours per month if distributed evenly across the billing period. This is not enough evidence to show that Edward Henning was required to register. In fact, if he did work about 7.5 hours a month he would not have been so required.

It’s precisely that issue that today’s document release shines some light on. The other day, San Pedro BID executive directrix Lorena Parker was kind enough to send me over 100 emails to and from Edward Henning.2 At first I thought I’d be able to pick out 3 consecutive months in which Edward Henning was compensated for 30 hours by assuming that the number of emails in a month was proportional to the number of hours worked. This didn’t pan out for a number of reasons, not least because I don’t yet have emails between Edward Henning and the City of LA that weren’t CC-ed to Lorena Parker. I can tell from internal evidence that there are some of these,3 and I have a pending CPRA request for them, but they’re not yet in hand.

Read on for more detail on the unregistered lobbying case as well as a new theory that I thought at first might actually get the BID itself in some trouble rather than just the consultant. I don’t think it’ll work out in this particular case, but it has interesting implications for the future. Bad scene for the BIDdies and lulz4 all round for humanity!
END_OF_DOCUMENT_TOKEN_TO_BE_REPLACED

Kerry Morrison, speaking at the February 9, 2016 meeting of the Central Hollywood Coalition’s Board of Directors, filled the boss-guys and boss-gals in on the California Franchise Tax Board’s like, TOTALLY UNFAIR, ongoing audit of the tax-exempt status of the CHC. The upshot seems to be that some guy a while ago forgot to pay some fee, and things escalated through no fault of Kerry’s, to the point where, because bureaucrats are dumb and mail letters to the wrong place, the FTB is auditing the CHC but a lot of records are missing because 12 years ago is a long time and how can they expect that we would still have them?!? There’s also a looming problem, unmentioned here by Kerry, in that the CHC, like all BID management companies, signed a pledge to the City of Los Angeles that they would “…notify the awarding authority [the Los Angeles City Clerk] within 30 calendar days after receiving notification that any governmental agency has initiated an investigation which may result in a finding that the contractor did not comply with any federal, state, or local law in the performance of the contract…” Kerry didn’t mention anything about this clause, and we don’t (yet) know whether the CHC is complying with it. Stay tuned for info on that.

Meanwhile, if you have five minutes to spare, watch and listen here for a master-class lesson in white privilege, zillionaire privilege, power-broker privilege, and generalized contempt for the mundane reality that most of us inhabit, all expressed with the liberal use of hand-waving, hair-flipping, eyebrow-waggling, and uvular ejective plosives. If you don’t have time, we understand. There’s a transcript after the break, and we’ll provide commentary on selected juicy bits as well.
END_OF_DOCUMENT_TOKEN_TO_BE_REPLACED

I’m just announcing a few new documents today. When I requested them it was almost an afterthought. I didn’t expect much of them. But one has turned out to be really interesting and potentially really important.

These are just routine Contractor Responsibility Ordinance pledges of compliance. Today I have three:

Now, one of these things is really not like the others.
END_OF_DOCUMENT_TOKEN_TO_BE_REPLACED

Today I received three interesting documents from the office of the L.A. City Clerk who, as you may know, oversees BIDs. One of the things that BIDs are contractually obligated to do is to fill out questionnaires related to the Contractor Responsibility Ordinance. On these they’re questioned about lawsuits against them and stuff like that. So I’m pleased to present these documents for the HPOA, and the Central Hollywood Coalition, and, finally, the Media District BID. I requested these as part of a long-term project which I can’t say too much about yet, although, of course, you’ll be the first to know when the fruit is ripe!
END_OF_DOCUMENT_TOKEN_TO_BE_REPLACED