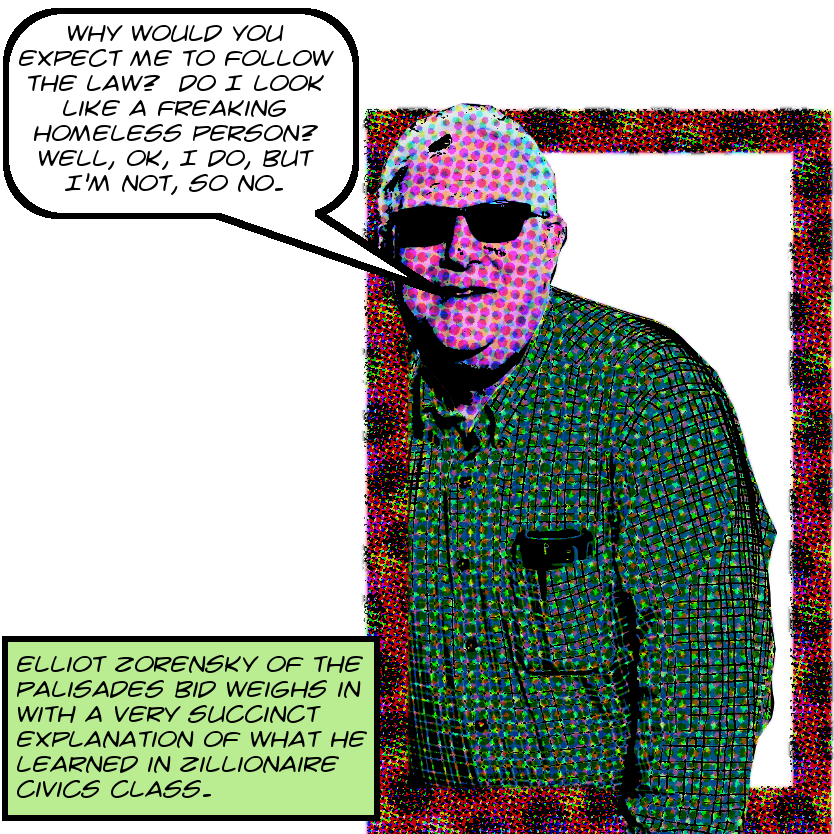 I know some of you out there have been remembering such classics as the story of the angry scary fat black homeless male man or the story of the gang members escaping the seething urban hellscape of Santa Freaking Monica and thereby wondering just why it is that it’s been since March freaking 2017 since I last posted any full frontal mockery of the halfwits-by-the-sea out in Northwest Zillionaireville. I’m speaking of course of the Pacific Palisades Business Improvement District, Mike Freaking Bonin’s platonic ideal of a good BID.

And it’s certainly no coincidence that my last few posts about these coastal dimwits had to do with Laurie Freaking Sale’s weirdo Humistonian CPRA aggression. For instance there was the incident of Ms. Laurie Sale’s being too busy to follow the law, a theory which doesn’t work so well for non-zillionaires.1 Then there was the case of board member Rick Freaking Lemmo explaining how they were going to spend 3% of their annual assessments on lawyers to keep records out of my hands.

Well, it turns out that that’s not working out so well,2 because earlier this week I took a trek all the way out to the damn Palisades on public transit3 to finally inspect some records after fifteen tooth-pullingly painful months trying to talk some sense into Ms. Laurie Sale and then a few more months of my lawyer trying to talk some sense into the world’s angriest CPRA attorney, Ms. Carol F. Humiston.4

And good lord, friends! The craziness in these records is beyond fever pitch! It’s beyond Ebola pitch! Can’t easily be measured by disease slash pitch comparisons is how crazy it is! For various technical reasons it’s going to take a long time to prep this steaming pile o’ puckey for publication, so I’ll be dribbling it out a bit at a time. Today’s installment consists of 44 pages of emails amongst the BID Board, which can be found here on Archive.Org.

And amongst the millionish sharp little shards of crazy to be found here is the single most egregious violation of the Brown Act that I’ve ever known to be committed by a BID.5 In January 2016 BID zeck dreck Laurie Sale6 emailed her board with a motion to approve a contract and one by one they all voted yes by reply-all. This is beyond bad, beyond obvious. Turn the page for a discussion of the section that this violates, of what can be done about it now,7 and transcriptions of and links to all the evidence.

The Brown Act is California’s open meeting law. It basically provides that all agencies, which includes BIDs,8 that wield public power must do so in public. As the law so eloquently states at §54950:

In enacting this chapter, the Legislature finds and declares that the public commissions, boards and councils and the other public agencies in this State exist to aid in the conduct of the people’s business. It is the intent of the law that their actions be taken openly and that their deliberations be conducted openly.

Anyone who’s read and understood §54950 will have no trouble following the law, because every other detailed requirement of the law flows clearly from that one principle: government agencies, including BIDs, can’t do stuff in secret. For instance, the Brown Act at §54952.2(b) can’t possibly come as a surprise:

I think we need to approve the Chrysalis contract. If everyone approves, I think Elliot can sign. Please RESPOND ALL

Lee Ford votes for the approval of the Chrysalis contract.

There are going to be no consequences for this violation of the law and betrayal of the public trust of the people of the great state of California. The Brown Act contains four remedies against those who violate it. The greatest of these is found at §54959, which states:

And as much as I despise these halfwitted BIDdies, I must admit that it is exceedingly unlikely that any of them knew what they were doing when they held this illegal meeting.9 In this case not only is ignorance of the law a defense, but stupidity enhances its efficacy. Leave it to zillionaires to find a law like that to violate! So no one’s getting arrested, no one’s going to jail. The other remedies are civil in nature. Next we have § 54960, which allows anyone to file a petition:

My understanding is that it’s not possible to use this to address past actions without meeting some other criteria discussed below, so this is out. Next we have §54960.1, which authorizes the filing of a petition to address past violations for the purpose of nullifying the action taken. Under this section action must be taken within 30 days of the violation.

Similarly, §54960.2 allows a petition for the purpose of addressing a past violation, but in order to invoke this section a demand letter must be sent to the agency within nine months of the violation giving them a chance to promise never to violate that part of the law again. So, sadly, nothing can be done to these arrogant BIDdies and their wanton violations of the laws of humanity and the Lord.

But in my experience, like wild beasts of prey who’ve gotten a taste for human blood,10 once zillionaires have gotten a taste for the outlaw life they never lose it. We can expect more violations to come to light, and, although the BID has hitherto obstructed timely access to its records to such an egregious extent that all violations uncovered via CPRA will be time-barred, that’s not always going to be the case. It’s hard to train zillionaires to obey the law, even harder than getting a camel through the eye of a damn needle, but I believe it can be done. Stay tuned for details!

Image of Elliot Zorensky is ©2018 MichaelKohlhaas.Org and is floofed around from this lil Zorensky here, going to market or not can’t tell cause not enough facts.