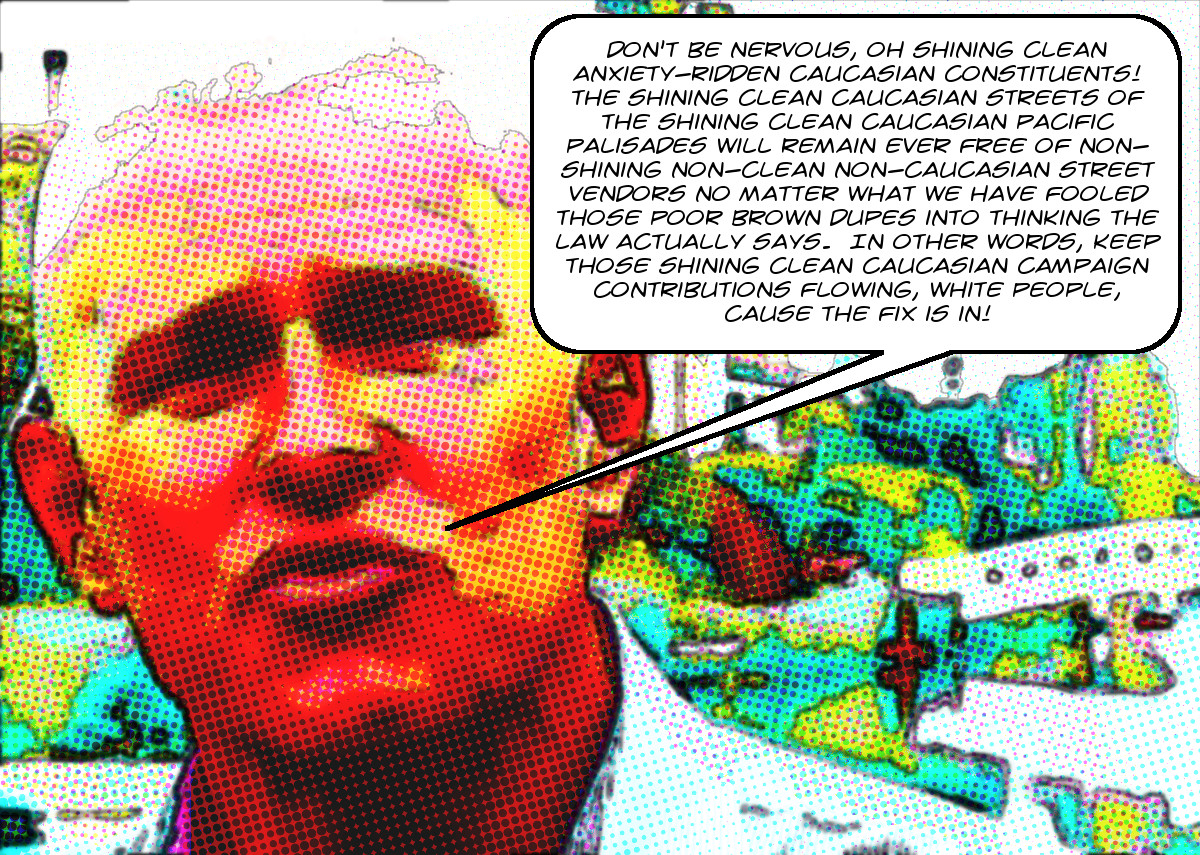 When last we peeked into the Minutes of the Board of Directors of the Pacific Palisades BID, we learned that they were all sitting around up there in Northwest Zillionaireville quaking in their super-pricy boots over the influx of gang members from urban Santa Monica. Today, well, there’s the serious matter of street vending to discuss, of course, but first, take a look at the minutes from January 4, 2017, where we learn about this:

Homeless issue – One person is a problem on Via de la Paz lately. He is a 300 lb., male black man with a nasty temper. Officer Moore recommends signing a “Trespass Arrest Authorization” form which was handed out.

Got it? He weights three hundred pounds.1 He’s black. And not only that, he is both male and a man. This is a truly frightening situation! I’m wondering if their trespass authorization form has a place to put the weight of trespassers that the cops are authorized to arrest? The standard form does not, but the LAPD is famous for deploying multiple helicopters to fly against the homeless in the Palisades. Are they going to refuse them a custom anti-homeless trespass form? Especially if they’re being overrun by a horde of three hundred distinct pounds of angry homeless black male man?

I mean, I know you can never be too rich or too thin, but that the Palisadesians are extra-scared of this man because “he is a 300 lb., male black man…” is somewhat unexpected, even though 300 lb. people can certainly “pose to be dangerous.” I would have thought that fear of the homeless would be measured more by the individual than by the pound, but I’m wrong again. Certainly this is why I can’t afford to live in the Palisades amongst the jittery little psychopathic self-interested zillionaire theorists of homelessness. My priorities are obviously really confused.

And if they’re going to pieces to this extent over one “300 lb., male black man,” how are they going to feel about the gracious shimmering snow-white streets of their little village2 being overrun by the herds of dark-skinned heladeros, frutateros, and eloteros that are even now massing at their borders just waiting for the City Council to give them the go-ahead to swarm in and start supplying their victims, the hitherto-uncorrupted-by-Mexican-ice-cream-treats Palisadeseans, with paletas de limón? Not good, I’m telling you that much. But their man on Spring Street, Mike Bonin, is there for them as he always is. Turn the page for details.

This matter was discussed at the PPBID’s January meeting, in addition to the incipient “300 lb., male black man” based holocaust, and it had something unspecified to do with Mike Bonin:

Report from Councilman Bonin’s Office – Laurie read a statement on Street Vending asking the BID to opine on an opt-in or opt-out position. Joyce said Chamber is against it. Laurie will write a statement on our position “At today’s Pacific Palisades BID Board Meeting, the Board was unanimously opposed to street vending in our BID district. If it should become law, we would like to see an Opt-In system in place, except for our existing Farmer’s Market.”3 Elliot made a motion to approve. Don 1 st . Rick L. 2 nd . Motion passed unanimously. Then Rick wanted to add that the Farmer’s market not be defined as Street Vendors.

This opt-in vs. opt-out thing is the central issue in the debate over what the arrayed forces of the City’s zillionaire elite will accept as an attainable compromise when it comes to vending legalization.4 It took a while for their position on this to evolve. Early in the anti-vending campaign, like around January 2015, which was before their messaging was adequately coordinated, they were asking for an opt-out system. By March 2015 they were supporting an opt-in system. By December 2015 their hired flacks had convinced the LA Times editorial board to support opt-in.

But sometime during 2016, doubtless influenced by the fact that Donald Trump’s election spurred the City Council to move forward immediately with decriminalization in order not to put vendors at greater risk of deportation based on bullshit street vending arrests, the zillionaires seem to have dropped their insistence on opt-in and switched over to supporting opt-out instead. They’re no doubt confident, and rightly so, that their political juice will allow them to manipulate any opt-out system to such an extent that it will function as opt-in anyway. And they’re surely right. For evidence, just witness what the Palisades BIDdies5 learned from Mike Bonin’s office at their February 1, 2017 Board Meeting:

The “opt out” method is now an option for property owners regarding street vending. Set of codes for the “opt out” method are still being established by the City, which may include the local councilperson having the ability to opt out on behalf of a community. This is to be added to the next month’s BID meeting agenda.

So that really settles it for them. The details of what Laurie Sale is talking about are described here. It’s interesting to note that the Council instructed the City Attorney, who is drafting recommendations about the proposed law, to write a report analyzing the possibility of “[p]roviding the City Council the ability to opt out of certain streets by Council action.” This is different from Laurie Sale’s version, which she describes as “the local councilperson having the ability to opt out on behalf of a community.” But it’s not different enough to matter at all.6 Laurie Sale is absolutely right to note that, if this principle is adopted, and there’s no reason to expect that it won’t be,7 then Mike Bonin, his wheels no doubt greased by the $1,200 given to him by PPBID president Elliott Zorensky will, by a mere wave of his magic-Councildude-wand, be able to keep the streets of the Pacific Palisades free of vendors. If only it were as easy to evade that pesky constitution and get rid of the angry fat black male homeless men, all would be well again in paradise!