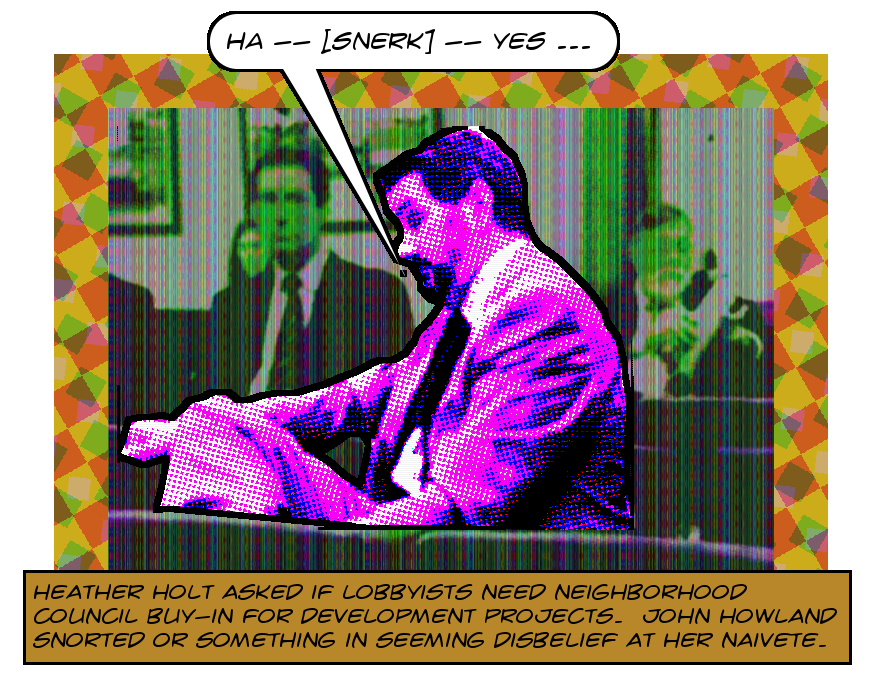 Yesterday afternoon the Ethics Commission held the first in a series of three meetings to gather even more input from interested parties concerning proposed revisions to the Municipal Lobbying Ordinance. I recorded the whole thing for posterity and you can watch it here:

I’ll be commenting on this and the next meeting1 from time to time, and today I just want to point out an interesting response from seasoned Los Angeles lobbyists John Howland and Bill Delvac2 to an interesting question from Ethics Commission ED Heather Holt. One of the proposals on the table is a requirement that lobbyists report attempts to influence neighborhood councils in addition to the other City agencies they’re already required to disclose information about. In the context of this discussion, Holt asked the lobbyists:

Just out of curiosity, for development projects, is there a general sense that you need a neighborhood council buy-in for it to go anywhere?

In response to this, über-düber lobbyist John Howland smirked and emitted an inarticulate snort, seemingly in disbelief that the boss of the Ethics Commission could ask such a silly question, before saying “yes.” This response was echoed by Bill Delvac, with Howland interjecting the occasional assent:

BD: We’re happy when we get to neutral.
JH: Yeah. Well, yeah.
BD: [Unintelligible] … the Charter and the Code, they’re really not binding. But it matters more to some Councilmen [sic] than it does to others and often [unintelligible] you wanna get their support. I wouldn’t have written the Charter that way, but …

This interchange certainly supports the Ethics Commission’s proposal to subject lobbying directed at neighborhood councils to disclosure, and, interestingly, there didn’t seem to be any actual opposition to this proposal from the lobbyists. So maybe, no matter what gets compromised out of the rest of the proposals, this one will make it through the gauntlet, which is a good thing.3

And turn the page for a discussion of some potential implications, possibly as-yet unconsidered, of this proposal having to do with the fact that, probably uniquely among NCs, the DLANC has a ton of BID staffers on its board of directors.

And if being able to convince boards and commissions of things is worth so much money to lobbyists, how much more money would an actual vote on a given board or commission be worth? What if a lobbyist could tell his client that not only does he have the ear of the commissioners, but he actually is a commissioner? Of course, this is clearly a corrupt situation, which is why it’s illegal in the City of Los Angeles for anyone who’s required by the MLO to register as a lobbyist to also serve on a board or commission.

This summary is an oversimplification, but only a slight one. The law in question is LAMC §49.5.13(A), which states:

But, as before, if NCs are sufficiently high value to make the disclosure of attempts to influence them necessary, how much more necessary is it for members of the boards of NCs to be forbidden from accepting money to influence City action? Once lobbyists are required to disclose attempts to influence neighborhood councils there’s no principled argument that will distinguish between NC membership and commission or board membership with respect to compensated lobbying.

That’s a big reason why the situation with the board of directors of DLANC is so upsetting. Its board of directors is chock-full of the staff of business improvement districts. Check out the current DLANC Board directory. On the board are Rena Leddy, executive director of the Fashion District BID, Estela Lopez, executive director of the Central City East Association, which runs the Downtown Industrial District BID, Bob Newman, on-and-off employee of the Historic Core BID, and Josh Kreger, director of real estate and planning at the South Park BID.

Each and every one of these people5 “…receive[s] compensation to communicate, either personally or through an agent, with a City official for the purpose of attempting to influence action on a City matter.” It’s just what they do. And the City not only knows about it, they like it that way. Rena Leddy alone has boasted as late as April 2017, here in this board packet, that she and the rest of the Fashion District staff

…spend 40-60% of their time on building relationships and advocating on behalf of the Fashion District and see it as a key tool in some of the more fundamental issues facing the future. With DTLA 2040 on the horizon, the Fashion District needs to be fundamentally proactive in the future of the District. Zoning modifications, allocation of public resources to address infrastructure issues, public benefit priorities, grants and partnerships [are all] integral to the future.

That is, advocating for the financial interests of her BID is around half of Rena Leddy’s job as executive director. And she has a seat on the board of DLANC with which to push the agendas of her employer, the BID. And she’s not ashamed to use it, even in the most blatant of ways.

Just for instance, consider the fact that Mark Levy is on the Fashion District’s Board. He also works for mega-development City Market South. Not only does Rena Leddy lobby for Mark Levy’s employer by, e.g., getting quoted extensively in puff pieces about the project,6 she also VOTES IN FAVOR OF CITY MARKET SOUTH when its matters come up before DLANC.

Here is an example from June 2017. Take a look at the minutes of that month’s meeting.7 Look on page seven to see an application by City Market South for a bunch of variances.8 Then look on page ten to see that Rena Leddy seconded a motion to bundle the land use items and then VOTED IN FAVOR of City Market South’s application. There’s no reasonable way that this kind of thing should be allowed. It looks corrupt and it quite possibly is corrupt.9 Mark Levy is Rena Leddy’s employer in that he’s on the BID’s board of directors, at whose pleasure Rena Leddy retains her very job. How can anyone expect that she’ll make impartial decisions about Mark Levy’s projects when they come up before DLANC?

to make recommendations to the Mayor and the Council concerning campaign finance reform, lobbying, governmental ethics and conflicts of interest and to report to the Council every three years concerning the effectiveness of these laws

If the City Council ends up agreeing with the Ethics Commission’s proposed updates to the MLO and including NCs, despite the fact that they don’t fill out statements of economic interest, as City Agencies for purposes of the MLO, I really hope that the very next step is to include NCs as City boards or commissions for purposes of LAMC 49.5.13(A). If they do that it will take care of this kind of nonsense that Rena Leddy, Estela Lopez, and Josh Kreger are getting away with. And what’s an Ethics Commission even for if not taking care of nonsense?

Image of John Howland is ©2017 MichaelKohlhaas.Org.