UPDATE: This story is about my attempt to get copies of 24 episodes of an LAPD podcast. LAPD has so far refused to produce them to me but I independently found a way to download them from the Department’s podcast host. I uploaded all 24 to the Internet Archive and you can get copies at this link.

This is a story about two things. First, yet another instance of the Los Angeles Police Department violating the California Public Records Act in yet another completely novel way.1 Second, about a new tactic I thought of to enforce CPRA compliance by the City of Los Angeles in general and LAPD in particular, that I am trying out for the first time.

The idea is that some of the City’s violations of the CPRA are specifically designed to hinder me personally and that this is a violation of LAMC 49.5.5, which forbids misuse of official position to create a private disadvantage. On Friday, July 31, 2020, I filed a complaint against LAPD Discovery supervisor Kris Tu on this basis. Read on for details!
END_OF_DOCUMENT_TOKEN_TO_BE_REPLACED 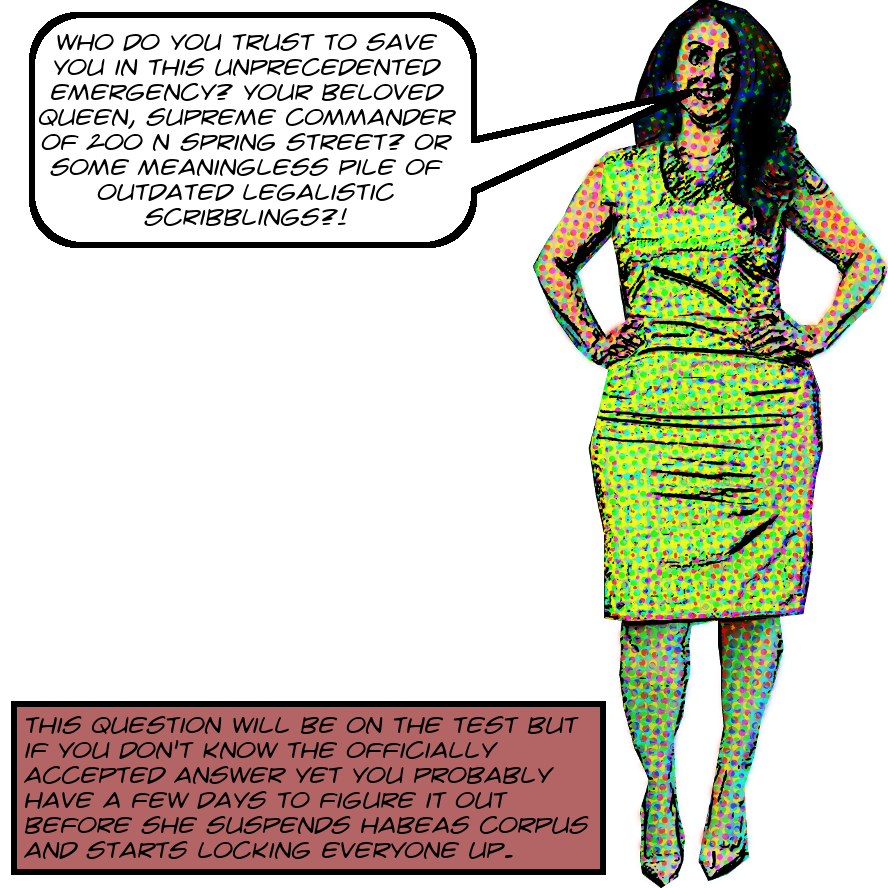 On March 11, 2020 Los Angeles City Council President Nury Martinez sent a letter to her colleagues announcing that in response to the coronavirus emergency Council would meet weekly for the rest of the month. The Los Angeles City Charter at §242 gives the Council the sole power “to organize its business [and] prescribe the rules of its proceedings” subject only to a couple of limitations. But one of these limitations is directly on point and requires Council to meet at least three times a week with no exceptions:

The Council shall hold regular meetings at least three days each week. Meetings may be held in City Hall or elsewhere in the City. By resolution, the Council may establish periods during which the Council or its committees will be in recess.

Three meetings a week are required by the Charter. And the office of Council President is established by the Charter as well, at §243, but the only power granted there is to replace the mayor when necessary. All other powers of the Council president are granted by the Council Rules. And obviously the rules can’t override the Charter.

Note that §242 does give the Council itself the power to go into recess, and probably the Council could choose to go into recess except on Tuesdays, but this power must be exercised by resolution, not by the unilateral decree of the Council President. Resolutions require a vote of the full Council, to be placed on a publicly posted agenda, and public comment accepted.

I’m not sure what penalties there are, if any, for violations of the Charter, but it’s surely a violation of the oath of office, found at §215, which includes the City Charter among the laws that Councilmembers are sworn to support. It’s true that extraordinary times require extraordinary measures, and that elected officials need extraordinary powers during emergencies. But extraordinary powers are extraordinarily dangerous and must be limited by law, which Martinez has exceeded here.
END_OF_DOCUMENT_TOKEN_TO_BE_REPLACED

(Hitherto we have sought to understand O’Farrell’s anti-nightclub campaign; the point, however, is to change it)

The other day we wrote about the Rusty Mullet conditional use permit revocation hearing, but didn’t get around to covering CD13 Hollywood Field Deputy Dan Halden’s testimony, which you can listen to here, and as always there’s a transcript after the break, and we’ll just take it line by line, also as always.

My name is Daniel Halden. H-A-L-D-E-N. Good afternoon, I guess. I was going to say good morning, but good afternoon. I serve Councilmember Mitch O’Farrell of the Thirteenth District. I’m his Hollywood Field Deputy, which is a position I’ve had since May 2014.

It is editorial policy here at MK.org to showcase anything true that our guests say. Unfortunately all too often that’s no more than their name, rank, and serial number.

It’s the top priority of the Councilman [unintelligible] to ensure public safety and a high quality of life, whether it’s in Hollywood or anywhere in the Thirteenth District.

Not really. In fact it is the top priority of the Councilman to hire private security forces who are not subject to democratic control so that they can physically attack homeless people who have not yet been targeted by one of his on-demand forcible encampment cleanups or attempts to deny them food and in the spare time left to him after these efforts, to destroy nightclubs in Hollywood solely because Kerry Morrison and Peter Zarcone are unable to tell the difference between groups of nonwhite people having fun and freaking civil insurrections or something. Anyway, that’s what the evidence shows is the top priority of the Councilman. We guess you could call that a high quality of life, but really, whose life?
END_OF_DOCUMENT_TOKEN_TO_BE_REPLACED