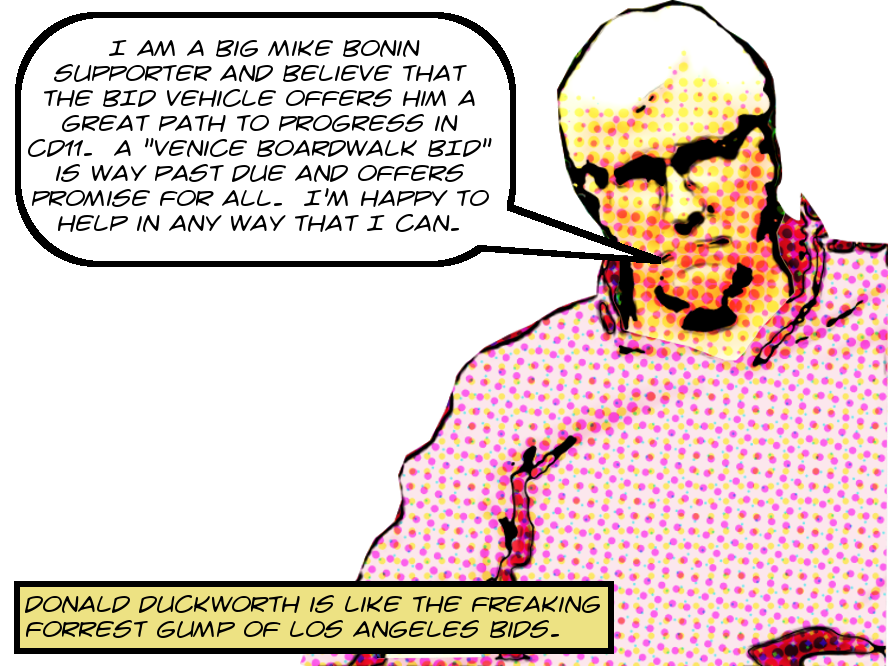 The story of Tara Devine and the Venice Beach BID has been told repeatedly and in great detail starting in 2016 when the ultimately successful push to establish this most-despised of Los Angeles BIDs1 was revived. But the pre-2016 history remains obscure, not least due to zeck dreck Devine’s obstreperous obstructionism with respect to providing public records.2

Of course, everything about this BID is interesting,3 so what a pleasant surprise it was to find in a recent release of goodies4 by BIDdological freak show specimen Donald Duckworth a series of emails from 2014 showing that when Mike Bonin first kicked off the Venice Beach BID formation process his staffie Debbie Dyner Harris turned to El Duckworth to hook up with criminal conspirator and founding BIDfather Carl Freaking Lambert to get the job done. Internal evidence strongly suggests that this was the beginning of the modern VBBID formation process.5 Strangely, Estela Lopez, the wickedest woman on Skid Row, was also slated to be involved.6

The story begins on June 5, 2014 when Debbie Dyner Harris emailed El Duckworth with a little proposition:

Hi Don. I hope all is well. The Councilmember is hosting several property owners and business owners along Ocean Front Walk in Venice at a meeting this Monday, June 9, to discuss creating a BID. He was wondering if you’d be able to attend, to help answer any questions on the creation and operation of a BID, and providing your insight. We will be joined by Miranda Paster of the City Clerk’s office, as well as the founding director and the current president of Central City East’s BID.

I am sorry for the late notice, we’ve been trying to develop our agenda. It will be held this Monday, June 9, at 9:45am in our Westchester community room. I hope you can make it!

And turn the page for the rest of the story, along with links to and transcriptions of the evidence!

For reasons of his own, it seems from Debbie Dyner Harris’s next email that El Duckster didn’t answer:

Hi Don, I haven’t heard back from you and wondered if you’ll be able to join us on Monday morning?
Thanks,
Debbie

Thanks Debbie. I’ll be there for you guys. I’m out if town this weekend so couldn’t respond quickly.

That makes Mike happy, and if Mike ain’t happy, ain’t nobody happy:

that’s great, thanks. Mike will be thrilled. have a great weekend,
Debbie​

And after the meeting it seems that Mike was indeed happy. Debbie thinks things are finally happening!

Hi Don. Thanks so much for coming out this morning. Mike and I greatly appreciate your time and energy. I think there is some actual movement forward!
Debbie

And this makes Mr. Donald Duckworth happy too! Everybody has won and all must have prizes! Along with the voluble response transcribed below, El Duckie sent along a copy of these proprietary pseudo-petitions that he handed out to Carl Lambert and the rest of his co-conspirators at the meeting:

t was my pleasure Debbie. I am a big Mike Bonin supporter and believe that the BID vehicle offers him a great path to progress in CD11. A “Venice Boardwalk BID” is way past due and offers promise for all. I’m happy to help in any way that I can.

Attached is the informal petition form I agreed to draft for Carl and the other stakeholders present. If five (5) proponents copy this form and get 10 business / property owner signatures each, that would be 50 signatures, which would surly impress Miranda Paster and the City of the seriousness of the Venice BID formation effort.

Let me know as I can assist further.

The story gets a little more complicated to read at this point because for whatever reason I don’t have exact copies of the emails. They came to me appended to the bottom of fifteen pages of replies found in this June 27, 2014 email from Bonin staffie Mark Grant to El Duckworth. As I’m sure you’re aware, you have to read them up from the bottom. A well-known problem with obtaining emails down in the chain is that, depending on the client, the recipients may be erased. That’s the case with many of these. Anyway, after the meeting with El Duckie on June 9 Carl Lambert went right to work with those bogus petition forms he’d received:

Everyone, we have a majority of owners in favor of a BID. Thanks for everyone’s prompt response. The attached petitions comprise about 30 lots. Some are entire blocks. We are now ready for the next step. Thanks, Carl

Please sign and return the attached petition in support of the bid. Please get another signature or two. If you have any questions, please give me a call or send me an email. A scan or fax is fine. Thanks for everyone’s support.

And Debbie Dyner Harris, she to whom Mike Bonin said get the BID or get lost, she was freaking thrilled by this and told everybody so. This bit of the conversation is interesting independently as it gives us the earliest known list of BID proponents, along with their email addresses:

That is fantastic! I will send this on to Miranda right away,

And then Carl Lambert who, many famous outlaws and criminal conspirators, can’t resist tooting his own whatever passes for a horn in the sordid world of Carl Lambert:

We have over 50 properties that have signed up. Not bad for 48 hours…

Debbie Dyner Harris knows the role she’s meant to play in all this:

quite impressive, though not a surprise

At this point Carl Lambert is starting to quiver. He wants that BID so, so bad and he can feel it coming together! If only he knew that it would be essentially four years from June 2014 that the BID would start doing any damn thing:

Here are few more. Did you both get the 20 that I sent yesterday? Carl

Miranda Paster has seen it all and, from her tone, she’s evidently not impressed:

I received them yesterday. Please ensure that you work with the Ccl office on your intentions, motion and funding. I will provide the office with the language for the motion after I learn of your intentions (Ocean front walk funding the full amount, or funding $40,000 with $40,000 from BID Program, or $40,000 from CD 11).

Miranda Paster’s job description does not include fluffing BID proponents to keep them camera-ready, but obviously Debbie Dyner Harris’s does:

Carl, I am happy to meet with you and/or the others to discuss the funding issues as soon as you can. But please know that the Councilmember wants to do our part as soon as humanly possible!

Donald Duckworth is a weirdo, it’s true, but Carl Lambert is both a weirdo and a self-proclaimed comedian:

Great ten of us will be there in an hour….

I can do tomorrow late afternoon, like 4 or 4:30 but next Thursday is out- we have an all day staff retreat. and I am gone the entire week following. any other times next week if tomorrow doesn’t work for you?

And on June 12, 2014 Carl Lambert is still quivering with soon-to-be-fulfilled anticipation about his damnable BID:

We have received petitions from about 70-80% of the owners on the Boardwalk and adjacent Commercial lots. Can you meet with Debbie tomorrow at 4PM to discuss funding?

Let us know. Thanks,

And then … two weeks of unaccountable silence until June 27, 2014 when Mark Sokol can bear it no longer:7

Hope you are well. What are the next steps to move the BID forward?

Please let me know if I can assist.

Carl Lambert, that same day, seems to be blaming the whole delay on Donald Freaking Duckworth who, you will recall, started off the whole conversation by not answering. He famously didn’t answer the CPRA request to which I obtained these very emails as a response for so long that I was forced to sue the fellow. So that it was all his fault and that his fault was incarnated as a failure to respond is exceedingly plausible, innit? And that’s why Carl Lambert is looking for a new consultant:

I have reached out to Don Duckworth and had no response. Are there other consultants that can help up do the math and guide the process? Carl

And that is how it came to pass that on June 27, 2014 Mike Bonin’s staffie Mark Grant sent this plaintive plea to El Duckworth, who seems to be known or at least thought of as fairly Christlike around CD11 secret headquarters:

Are you going to be able to work with the Venice group? No pressure here but I’ve already told them that you walk on water.

Well, it would seem that El Duckie got the message because on June 30, 2017 he emailed Miranda Paster, Mark Grant, and Debbie Dyner Harris and said, yeah, I’m on the bus!8
Subject: I talked with Carl Lambert this AM.
From: Donald Duckworth <duckworth.donald@gmail.com>
Date: 06/30/2014 04:50 PM
To: Miranda Paster <miranda.paster@lacity.org>
CC: Mark Antonio Grant <mark.grant@lacity.org>, Debbie Dyner Harris

Mark Antonio Grant with CD11 is also interested in having me meet with an influential property owner who happens top be in town at this time.

So, I think that the issues we spoke of are addressed at this time.

And that’s where the discussion ends in the emails that I have. Clearly I’m working on filling the gaps with respect to the Venice Beach BID, but I sure didn’t expect to find new information here, and I double triple especially didn’t expect to have Mr. Donald Duckworth popping up like a muppet from a trash can, but that’s exactly what did happen! I’m sorry there’s no punch line here. This is pure primary sourcing at this point. Understanding for its own sake. Obviously if you made it this far down in the post you’re down with that!!

Image of Donald “El Duckie” Duckworth is ©2018 MichaelKohlhaas.Org and is migged and swigged outta a screenshot from this El Duckie here.