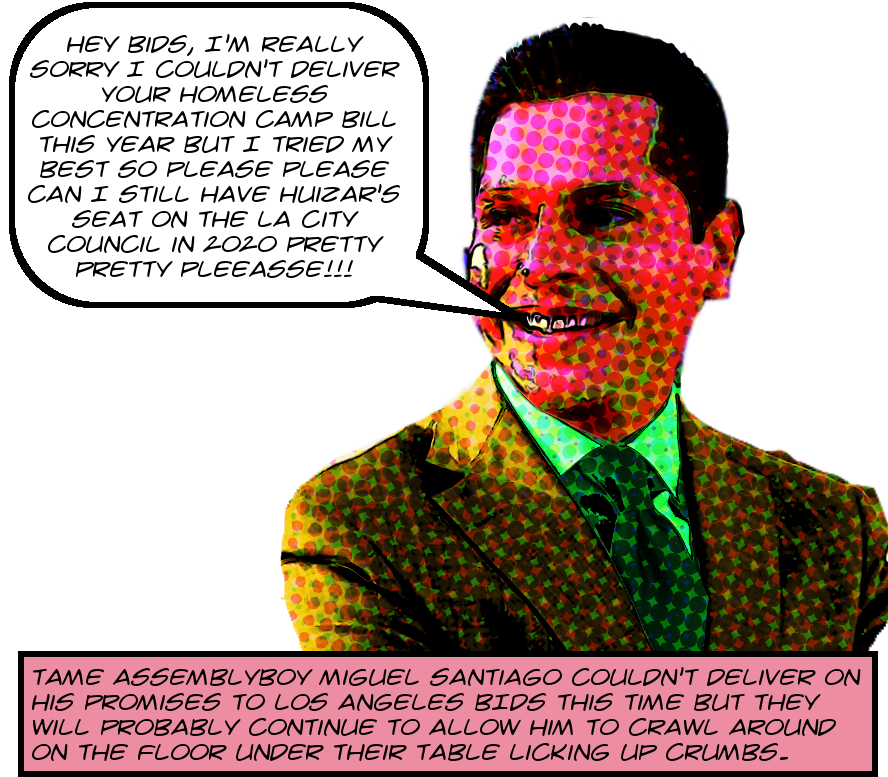 In January of this year Assemblymember Miguel Santiago introduced AB-1971, which was meant to expand the legal definition of a gravely disabled person essentially to allow at-will internment of homeless human beings. This pernicious nonsense was eagerly supported by Los Angeles City Councillors and their BIDdie co-conspirators. The bill met vigorous opposition from homeless people, their advocates, civil rights supporters, people who see how such a law could be weaponized against the elderly, and so on. A coalition of the sane, that is.

Last month, in a particularly cynical move, the bill was amended to only apply in Los Angeles County. However, even that concession to the opposition evidently wasn’t enough to save it. Yesterday, on the last day of the 2018 legislative session, the bill was placed on the inactive file. I don’t pretend to understand much about the arcane workings of the legislature, but it seems that this means it’s not dead, it could come back for further politicking next year, but that it’s not going to pass into law in 2018 and therefore will not take effect in 2019.1

Of course the bill’s supporters presented it publicly as a compassionate measure to save homeless people who would otherwise die on the street. Regardless of their stated intentions, though, it’s clear that, if passed, this bill would have given police and BIDs a powerful tool for clearing homeless people off the streets and into carceral institutions, the better to effectuate their goal of cleansing the streets of Los Angeles of people who they see as no better than trash.

This perspective is supported by the lists of opposers and supporters, consisting of mostly governments, police, and Kerry Morrison’s wholly-controlled subsidiaries, which you will find after the break.

The following information is from the Senate Floor Analysis of the bill.

According to the author, more than 800 homeless individuals died on the streets of Los Angeles County in 2017. It is inhumane to be a bystander when we have the power to do something to save lives. Many of these deaths could have been prevented with suitable medical treatment. By changing the definition of “gravely disabled” to consider urgently needed medical treatment as a basic human need when assessing an individual’s need for conservatorship while maintaining all statutorily protected safeguards and civil liberties, we will be one step closer to providing proper medical treatment for homeless individuals with mental illness who are suffering on the streets with serious physical ailments.