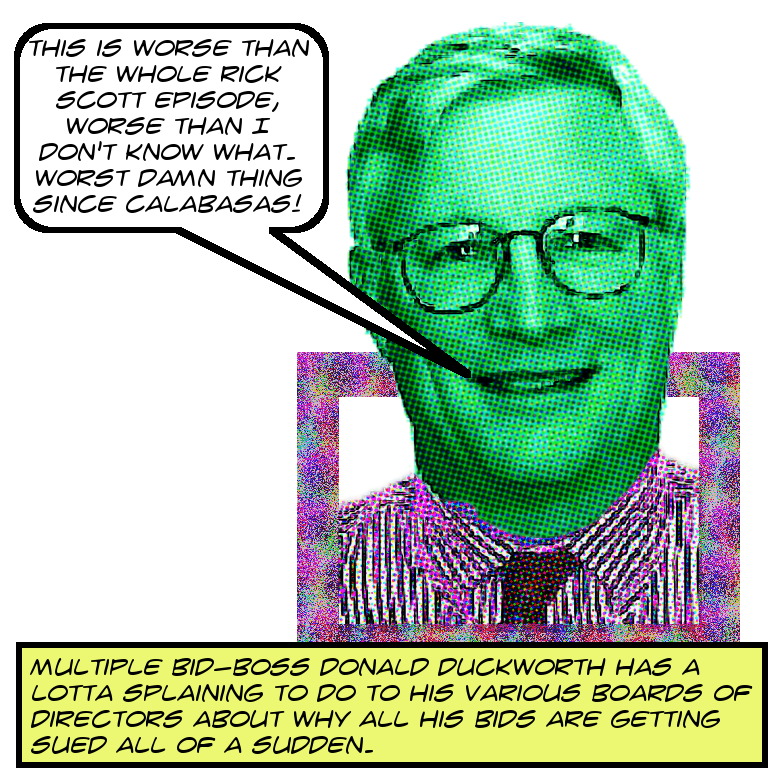 Remember Don Duckworth? Big bad BID boss of both the Melrose BID and the Westchester Town Center BID?? We haven’t heard from Mr. Duckworth here on the blog in a long old time even though he is quite an interesting character, what with his BID analyst switcheroos and his kooky Brown-Act-flouting bylaws and that whole Calabasas episode and so forth.

His absence from my literary life has not, however, been by choice.1 The fact is that circa last June the guy just decided to stop responding to my CPRA requests altogether. No records, no answers, no nothing from Don Duckworth. Hence no joyously mocking blog posts and so on. Well, friends, that’s about to change, and change big-time!

You see, my lawyer, the incomparable Anna von Herrmann, recently filed two petitions, one for each of Duckworth’s BIDs, to compel compliance with the CPRA. You can find them here on Archive.Org on pages which I will update if/when the cases generate more paper:

And turn the page for some excerpts from the Melrose petition! And a little more commentary!!

1. This is a petition to enforce the California Public Records Act (“CPRA”) against Respondent, the Melrose Business Improvement Association. Petitioner [Mike K.] submitted three requests for public records to the Melrose Business Improvement District (“the BID”), which Respondent administers. These requests asked for access to clearly-identifiable records fundamental to the BID’s operation that is subject to mandatory disclosure under the CPRA. Respondent failed to respond at all to two of the requests, and it failed to disclose large portions of the requested records for the remaining request. Respondent has thereby violated the CPRA.

2. The public’s access to information is obstructed by Respondent’s repeated and systemic violation of the CPRA. By this Petition and Complaint and pursuant to the Code of Civil Procedure §§ 1085, et seq. and Government Code §§ 6250, et seq., Petitioner respectfully requests from this Court: a writ of mandate to command Respondent to disclose all non-exempt information Petitioner requested and thereby comply with the CPRA; a declaration that Respondent’s conduct fails to comply with the CPRA; and a permanent injunction enjoining Respondent from continuing its pattern and practice of violating the CPRA.

7. The city of Los Angeles is home to approximately 40 BIDs, including the Melrose BID. Although BIDs are private entities governed by unelected, private officials, they collect monetary assessments from local property owners and can have substantial impact on the manner in which neighborhoods operate—from influencing which businesses operate in an area, to instituting private security forces and expelling homeless individuals from public spaces. Given their level of public power, BIDs are subject to relatively little public oversight, making the CPRA an important tool to unveil and understand their activities.

8. As an open records activist, [Mike] submits CPRA requests to BIDs throughout Los Angeles that shed significant light on the BIDs’ operation. His research has made a tangible impact on open government, BID activity, and the enforcement of accountability laws in Los Angeles.

9. For example, through CPRA requests, [Mike] discovered that various private BID security patrols were not registering with the Los Angeles Police Commission as required by law. As a result, the Los Angeles City Attorney resumed enforcement of that provision and took steps to ensure that BID patrols did register with the Commission. This also resulted in the Police Commission investigating a BID patrol for excessive use of force, thereby acknowledging that it had jurisdiction over citizen complaints against private BID security. These changes would not have been possible without [Mike]’s ability to obtain information from the BIDs via CPRA requests.

10. As another example, through CPRA requests, [Mike] found that armed BID patrols contracting with the Hollywood Property Owners Alliance were responsible for more than 1,000 custodial arrests of Hollywood homeless residents each year. Shortly after [Mike] began scrutinizing these arrests through public records requests, BID patrol arrests plummeted 70%—from 1,057 in 2014 to 313 in 2015. That trend of reduced arrests has continued into 2016 and 2017. Again, this change would not have been possible without [Mike]’s ability to obtain BID records through CPRA requests.

11. This type of information cannot be uncovered if BIDs do not comply with their statutory obligation to make their records open for public inspection. Here, the Melrose BID’s failure to produce requested public records serves to maintain its activity in a shroud of secrecy and to shield its operation from community oversight. Its refusal to respond to public records requests violates the CPRA and frustrates the democratic process.

56. Most notably, Respondent has failed to provide the large majority of the basic and fundamental records that [Mike] requested. It has been over 15 months since [Mike] submitted his first two requests, and more than 13 months since he submitted his most recent request, but Respondent has still failed to produce the requested public records. Respondent has thereby unlawfully denied access to these documents, all of which carry a strong public interest in disclosure. By failing to produce even one of these public records, Respondent is maintaining in a shroud of secrecy records related to the BID’s most basic day-to-day operations. Respondent has failed to provide these records at all—let alone “promptly,” as required by the CPRA. § 6253(b).

58. Indeed, the portion of records that the BID did provide in response to [Mike]’s first request has already revealed potential violations of law by Respondent. As one example, the documentation revealed that the Melrose Business Improvement Association’s bylaws seemingly violate state open meeting laws under the Brown Act. The bylaws allow for Respondent’s meetings to take place without public notice, and they allow for Respondent’s Board of Directors to take binding action outside of lawful meetings, both provisions that contravene the Brown Act. See § 54950, et seq.; Streets & Highways Code § 36612 (providing that BIDs are subject to the Brown Act). Public access to records through the CPRA has therefore already shed significant light on the BID’s activity and its operation outside the public eye. By withholding the remainder of the requested information, Respondent is shielding from disclosure information that could reveal additional unlawful actions of substantial public concern.

And the rest of it is mostly just instance after instance after instance of Donald Duckworth’s ignoring my repeated requests for him to please help me and help himself by complying with the law. He wouldn’t do it, and so here we are. As you surely know if you follow this blog, I’ve been trying for years to get the City of Los Angeles to mediate between me and the BIDs so that these endless and expensive writ petitions could be avoided.

Not only has City Clerk Holly Wolcott refused to do so, but soon after I asked, the City revised its standard contract with BIDs so that, at least explicitly, the City was no longer responsible for requiring BIDs to comply. Which is too bad, because it would save everyone a lot of time and trouble and especially money if there were some procedure for dealing with the BIDs’ CPRA transgressions.

If only the City of Los Freaking Angeles cared as much about making BIDs comply with the CPRA as they do about making them publish their damn quarterly newsletters. They don’t, though, and no one knows why. So expect to see more petitions until someone out there in BIDlandia comes to their damn senses.

Image of Donald Duckworth is ©2018 MichaelKohlhaas.Org and was tranformatively mogrified outta this little item here.