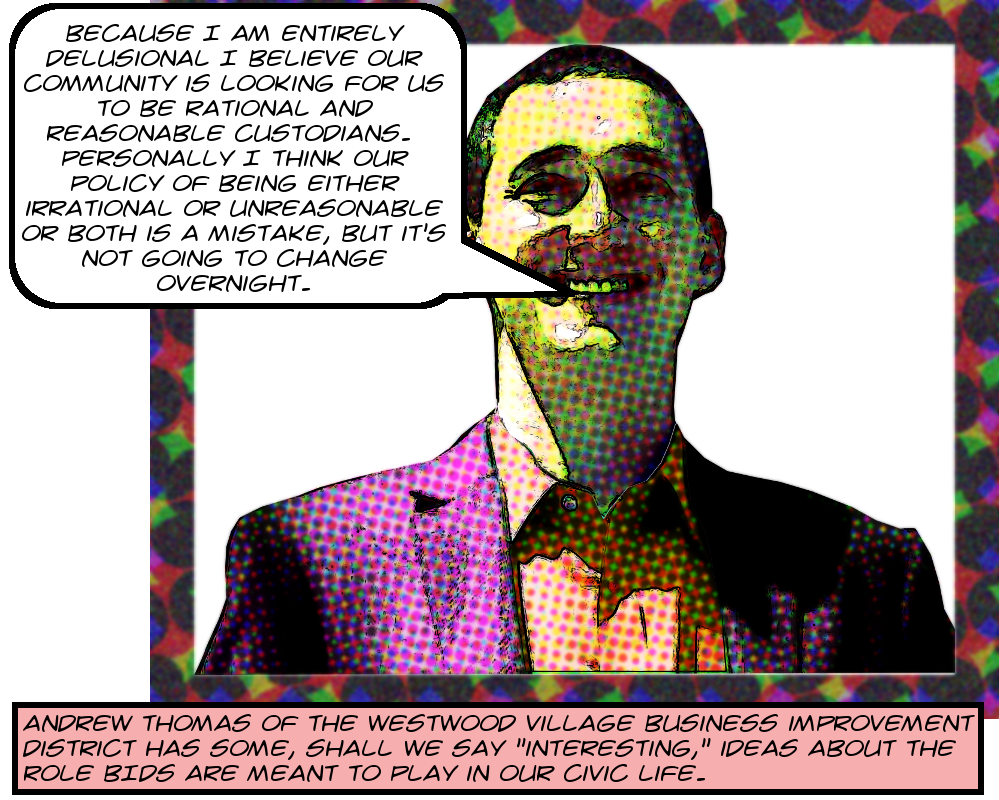 I published a first batch of emails from the Westwood Village BID last month, and they’re available here on Archive.Org. As you’ll recall, Andrew Thomas, duly following the nonsensical instructions of the BID’s lawyer, the ballistical barrister of Burbank and anger-management poster child, that is to say Ms. Carol F. Humiston,1 insisted on printing out 90% of these emails, crossing out about one email address per page to justify his unsupportable foolishness, and then proposing to charge me $0.10 per page for copies of the paper.

Of course, they can’t prevent one from inspecting for free,2 and thus, because I now understand the issues involved in the whole Westwood Forward debacle far better as a result of reading the records I already obtained,3 and could therefore benefit greatly from additional review of this material, I zipped out to the Village yesterday morning to look through the goodies yet again!

And although in June, when we first began this quiet slow motion struggle, Andrew Thomas, in clear violation of the law, forbade me from photographing records, evidently Ms. Carol Humiston has cleared that up in his minionesque little mind, and so now, while he and his security guard are sitting there burning $125 per hour watching me inspect, I am able to copy the records for free.4

And that’s exactly what I did yesterday morning, and I came away with 44 pages of exceedingly interesting material, which you can peruse here on Archive.Org. It’s all good stuff, and I’ll be writing about all of it eventually, but today there are three especially interesting subjects to cover. They’re outlined in the headline, of course, and turn the page for the gory-glory details!

This was a hypershocking discovery at the time, since, although they were well known to lobby neighborhood councils in connection with their clients’ projects, no one concerned had heard of lobbyists being paid a lot of money to take a stance vis-a-vis the actual formation or nonformation of a neighborhood council. This is why it was super-interesting to discover via a couple of the emails I pried from Andrew Thomas’s greedy grasping gruesome fingers that there were also paid lobbyists involved in the Westwood NC subdivision process. In particular, first take a look at this February 5, 2018 email chain from Tina Vartanian of Afriat Consulting to Andrew Thomas:

Hope this email finds you well.

Aaron Green and I are with the Afriat Consulting Group, which represents business and community groups on issues related to local government. We represent some business stakeholders in Westwood and are interested in learning more about the proposed plans to create a new Westwood Neighborhood Council.

We are hoping we can set up a time to speak to you about the proposed plans of UCLA students to establish their own neighborhood council. If you would be kind enough to let us know when you might be available for a call, we certainly would appreciate it.

Thank you and our best.

Well, as I said above, the intersection of paid lobbyists with the neighborhood council subdivision process is inherently interesting. Although the email says nothing about it, it’s not hard to guess that Afriat’s clients, whoever they may be, will have supported the subdivision, the point of which was to make everything more friendly to the owners of large valuable commercial properties.

Speaking of Afriat’s clients, it’s a well-understood but often ignored fact that every single quarter of every single year, lobbying firms, Afriat Consulting included, are required to file disclosures with the City Ethics Commission revealing what they’ve been up to. And here’s Afriat’s most recent filing.

There’s nothing in there about the Westwood NC subdivision, but perhaps as interesting, we learn that Afriat bundled an $800 contribution to Paul Koretz, in whose district Westwood Village lies, and delivered it in the name of Kevin Crummy, who is not only a Westwood Village Board member but a member of their all-powerful Executive Committee. So there’s that. Furthermore, Afriat worked for an entity known as 900 Hilgard LLC, which certainly also is related to the BID and therefore to the NC subdivision.

As with most of these stories, this one’s inconclusive but suggestive as all heck-out. To close it out, though, take a look at this February 5, 2018 email chain between Westwood Forward shaman and all-round NC subdivision high priest and hoodoo guru Michael Skiles and Andrew Thomas himself.

They are discussing the identical email that Skiles received from Vartanian. “Do you know these folks?” asks Michael Skiles of Andrew Thomas. Andrew Thomas replies: “No clue. They just emailed me with the same request they made of you.” and then, a mere two minutes later, Andrew Thomas replied to Tina Vartanian to set up a phone appointment.

Andrew Thomas thinks BIDs are community service groups or something

This one is just a humorous interlude. Take a look at this poignantly moronic conversation between Andrew Thomas and Westwood local heroine and architect Jann Williams 6 I won’t bother quoting at length from this little slab of puckey, cause it’s not that interesting, but it does have this interesting, and self-parodying, bit of civic philosophy from Andrew Thomas, Zeck Dreck of the Westwood Village BID:7
Our Board has a policy of not taking positions on individual business or development. The UCLA residential hall is not only an individual development, but it’s outside of our boundaries too. This is why we haven’t heard it. Personally, I think our policy is a mistake. I believe our community is looking to us to be rational and reasonable custodians.

First of all, Andrew of the felonious sartorialism, it is against the frickin’ law for your BID to concern itself with matters outside its boundaries.8 Got that? Second, your community doesn’t expect BIDs to be anything. It’s not your community, and they don’t actually know you exist. Finally, no one expects BIDs to be “rational and reasonable,” whether custodians or not. BIDs are created by the City of Los Angeles to launder influence and money. That’s it. Get with the program or go back to freaking Santa freaking Monica, K Thx.

Everybody knows that there were only two reasons that led to the students of UCLA, led by floof-haired incipient action philosopher Michael Skiles, having their recent bad breakup with the Westwood Neighborhood Council, and those were more bars and more cheap apartments.9

And of course the local zillionaires glommed onto this effort like Amazonian leeches onto a wading horse because more bars and cheap apartments means easy-peasy community approvals of whatever hyper-rando projects the zillionaires can cram a couple of bars and some cheap apartments into, and that’s pure gold with the Planning Commission.

This is all perfectly understandable, and not surprising in the least. But it’s pretty clear that at some point in the process Michael Skiles, who, like all philosophers, both incipient and full-blown, is a narcissistic egomaniac,10 began to believe that he was a spokesdude for his generation, able to work magic with a flip of his do, and so on.

Which explains this March 9, 2018 email exchange here. First Laura Ambrose, who seems to be some kind of muckety muck at collegiate fluff-joint and exceedingly poorly punctuated Woodstock’s Pizza wrote to Michael Skiles thusly:

I saw an article from last summer in the Daily Bruin that quotes you as being active in the efforts to make Westwood more student-centric. I’d love to talk with you.

We have been looking at “opportunities” in Westwood for years. I don’t know if you’ve heard of Woodstock’s, bu we are in six major university markets in California. With the vibrant student community at UCLA, this market makes a lot of sense for us. What doesn’t make sense is some of the ridiculous restrictions to doing business in this community. It’s a shame and very polarizing.

My cell is ■■■■■■■■■ I’d like to talk with you about the efforts we hear are being spearheaded by some of the students.

And what’s this but the shamelessly whiny victimized zillionaire jabber about “ridiculous restrictions” and so on, zillionaire dog-whistling about government overreach and whatnot. But note the adoring tone, the seduction of Michael Skiles. She was sent to ask him: “Are you the one who is to come? The frickin Messiah?” ARE YOU HERE TO SAVE BUSINESSES FROM COMMUNISM??!?! Can he withstand the temptation of playing Jesus to Laura Ambrose’s John the Freaking Baptist?!!?

It seems that he cannot. He writes portentously to Andrew Thomas: “And now businesses are starting to check with me whether it’s safe to come into Westwood yet!” Look at him! He’s quivering with joy and self-importance! This is way before the election and he has already assumed the role for which he was destined, god-king of Westwood Village. All hail Michael Skiles! But you know, as the man said, it ain’t bragging if you really done it. And that’s not only all, it’s far more than too much for tonight. Wait till you see what’s coming up, though!

Yeah, so listen, it took me exactly 100 minutes to read through the records once again and take these 44 pictures. And all the while Andrew Thomas and his pet security guard just sitting there burning through $125 per hour. And that, as you can see, is slightly more than $2 per minute. Thus it cost the BID, for no reason whatsoever other than to putatively justify some arcane Humistonian theory, $200 to supply me with copies of these 44 pages that they’ve told me cost them $0.10 per page to create.

Now, $200 for 44 pages is $4.55 per page. That’s how much the BID burned for $0.10 pages. Would it not have made much, much more economic sense to have just given me the whole stack of pages, which they say cost about $50? These are the economic geniuses that über-genius Andrew Lloyd Thomas wants to act as rational and reasonable custodians? Good luck with that, friends!

Picture of scary smiley WVBID Zeck Dreck Andrew Thomas is ©2018 MichaelKohlhaas.Org and is, you know, mogrified offa this lil AT here.