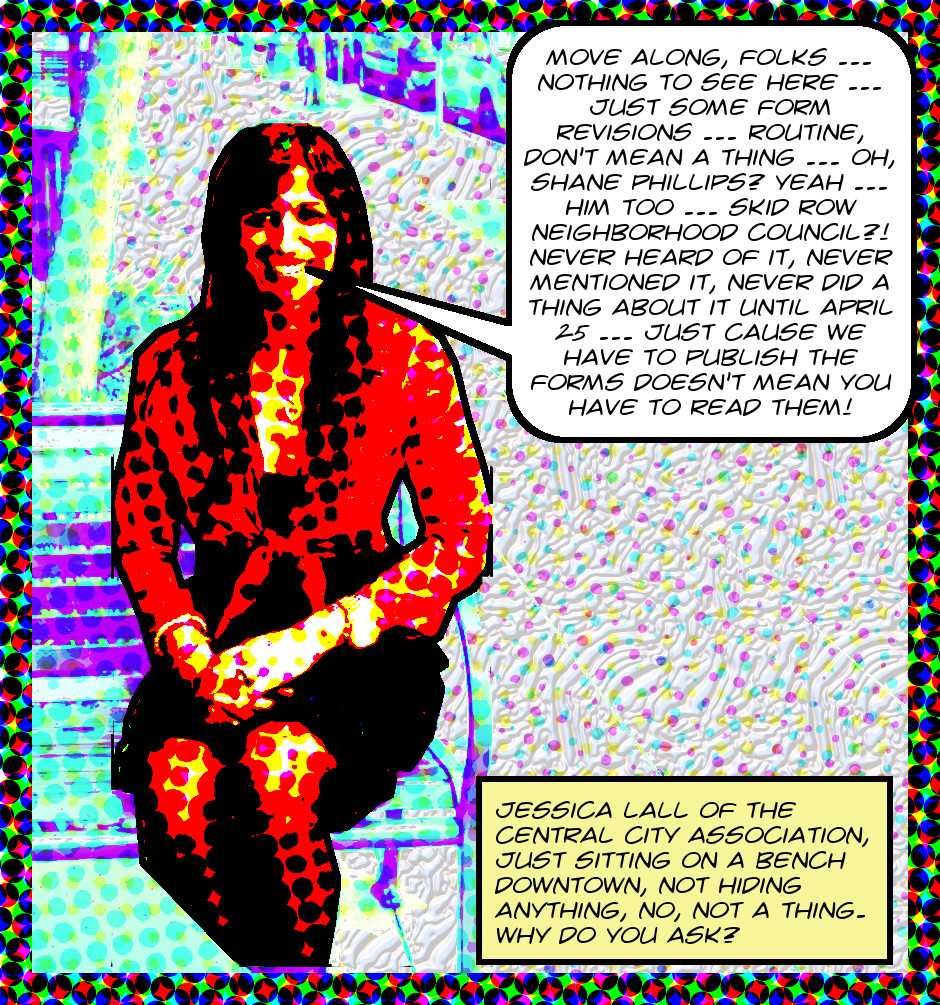 We’ve done a lot of reporting on lobbying efforts against the Skid Row Neighborhood Council formation effort, but until today it has focused entirely on Liner LLP, its ethics-free-zone-for-hire-in-human-form Rockard Delgadillo, and the probably illegal campaign they waged against the SRNC on behalf of their shadowy anonymous client United DTLA.

This morning, however, I discovered that that infamous Schatzian horror show, the Central City Association of Los Angeles, was also involved in the lobbying effort against the SRNC. It’s not possible from the evidence to tell when they entered the fray, but amended registration forms filed with the City Ethics Commission prove that it was no later than April 28, 2017.1 Here’s the documentary evidence, and you’ll find more detailed descriptions along with some discussion after the break:

In one sense, this development is no surprise. After all, erstwhile CCALA lobbyist John Howland spoke against the SRNC on March 20, 2017 at a Board of Neighborhood Commissioners meeting. On the other hand, it’s somewhat surprising that the CCALA bothered to update their form given that Liner LLP, the other gang of zillionaires involved in the subversion of the SRNC, is still in violation of the Municipal Lobbying Ordinance for failing to make required disclosures with respect to its lobbying against the SRNC.

On the third hand, it’s again no surprise, because even as the CCALA amended its registration, it still violated the law by failing to do so in a timely manner. After all, as I pointed out above, CCALA lobbyist John Howland was speaking against the SRNC as early as March 20. The Municipal Lobbying Ordinance at §48.07(F) requires that “Lobbyists and lobbying firms shall file amendments to their registration statements within 10 days of any change in information required to be set forth on the registration statement.”2

John Howland was lobbying against the SRNC on the 30th of March. On April 24 they amended their registration but didn’t disclose anti-SRNC activities. They did disclose them on April 28, but this is at least 29 days after the lobbying started, and therefore at least 19 days after the required disclosure. I don’t know if this violation is too trivial for the Ethics Commission to consider or not, but I will be reporting it this weekend, so I suppose we’ll find out.3

Also, I’ll just note that the fourth amended registration form was by no means their last. They also filed four more over the next few days, ending with the eighth amended form on May 5. Numbers five through seven seem just to have added one or two more issues on which they’d been lobbying. On the other hand, number eight added Shane Phillips, who is John Howland’s replacement4 as one of their registered lobbyists.

Shane Phillips, of course, is locally famous for his dim-witted comments on the Facebook which,5 as they are pretty clearly “seeking to influence the position of a third party on municipal legislation or an issue related to municipal legislation by any means, including but not limited to engaging in community, public or press relations activities,”6 are lobbying activities as defined at LAMC 48.02.

Interestingly, under certain circumstances, LAMC 48.04(B) prohibits registered lobbyists such as Shane Phillips from making misleading statements about City matters. Thus it’s possible that Shane Phillips is legally prohibited from lying on the Facebook! What a disadvantage that must create for him in comparison with his peers! E.g. maybe he’ll never get another date again!7

And finally, I can’t help but wonder why it was that Jessica Lall, head henchwoman of the CCALA, decided to come clean vis-a-vis her registration form by filing five amendments essentially within a week. Obviously the process was conceived and executed in a hurry or they wouldn’t have had to keep filing one after another after another, sometimes more than one per day. I’d like to flatter myself that this flurry of attempted compliance was the result of my having announced on April 11 that I’d be scrutinizing Ethics Commission filings with respect to the SRNC.

Jessica Lall’s filing flurry began less than two weeks later on April 24 and I know those CCALA flunkies do read this blog regularly. By press time, neither Jessica Lall nor CCALA director of communications Tina Oh had responded to my request for a comment, so my supposition that that was the motive will go, for now, unchallenged. More news when I have it, friends!

Image of CCALA frontwoman and Carol Schatz’s favorite dress-up dollie Jessica Lall is from an original in the Downtown News, which I chopped, cropped, and photoshopped until it is now ©2017 MichaelKohlhaas.Org.