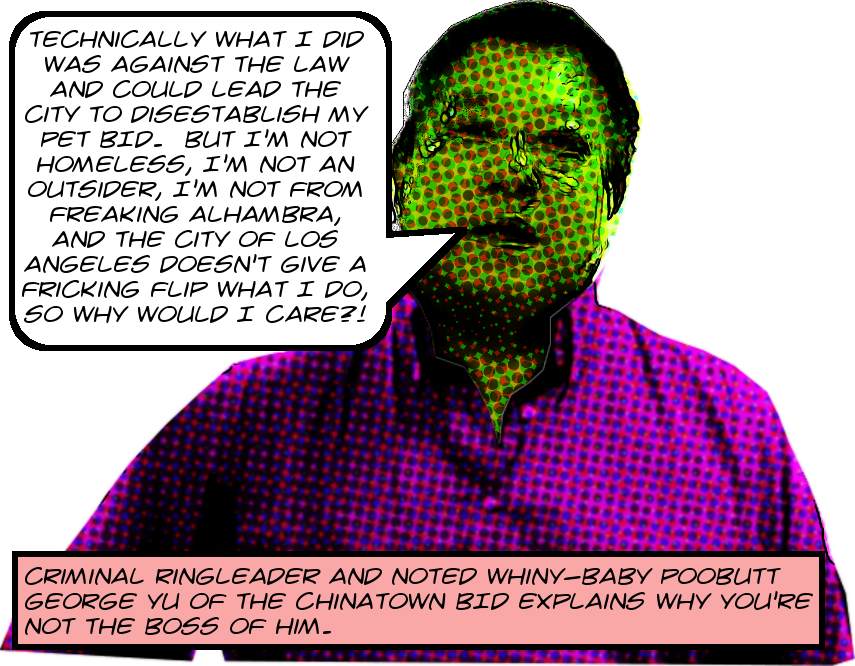 I’m sure you read about my big adventure yesterday when I went up north to film the Chinatown BID’s meeting and criminal ringleader George Yu got so salty that I wouldn’t tell him who I was that he flipped out to an extraordinary degree, screamed at me and then banned me for life from his weirdo fiefdom, the Far East Plaza.

But that’s not all that happened at the meeting. It turns out that George Yu is not merely a psychopathic rageball but he also runs his meetings like some kind of free association fest, like he’s on the couch and the audience is his analyst. And the most revealing, peculiar, unbelievable stuff came pouring forth from George Yu, self-betrayal oozing from his every pore, as they say.

Of course, it’s explicitly against state law for BIDs to spend money, which includes expending labor, on anything outside their boundaries. Just take a look at the Property and Business Improvement District Law at §36625(a)(6), which states unequivocally that: The revenue from the levy of assessments within a district shall not be used to provide improvements, maintenance, or activities outside the district …1

And such is the probably justified arrogance of George Yu in the face of legal limitations on his behavior that he admitted all this out loud on camera in the presence of Deputy City Attorney Kurt Knecht. It’s been my experience that no one at the City pays the least attention to the laws governing BIDs and, even when violations are pointed out to them, they will not enforce those laws.

Oh, and what else happened at this meeting? Well, remember the whole Chinatown Walmart scandal? You can guess which side of that George Freaking Yu was on. And then the damn Walmart went out of business of its own accord? Well, George Yu actually won the battle, but he’s still mad that anyone dared oppose him.

It was almost seven years ago and he’s still bitching about it at his BID meetings. Watch and listen to his psychopathic rageballitude on full and flagrant display as he fights the war over and over and over again:

I met Lisa during the Walmart Neighborhood Market project. Now that [unintelligible] has driven it out, how’s that working out for the rest of you in Chinatown? How’s that working out for the nonprofits that Walmart Neighborhood Market funded? So what we’d like to focus on is what the real stakeholders in the community want. Not somebody that’s living in Alhambra coming in [unintelligible] for Chinatown.

Sick burn, George Yu! His enemies are from freaking Alhambra!! That’ll learn ’em not to mess with George Freaking Yu if they don’t want him calling them out on their shit!

Anyway, that’s most of what I’m writing about today. There’s one more item of extreme interest from this meeting, which I will get to as soon as I can. Meanwhile, in closing, give a listen to George Yu explaining to public commenters how they are to comment. Keep it short and no more bullshit, saith George Yu. And that, as they say, is that.

Image of George Yu is ©2018 MichaelKohlhaas.Org. It’s a screenshot from the damn video, innit?

One thought on “Psychopathic Rageball George Yu Of The Chinatown BID Admits On Camera That He Broke The Law By Using BID Personnel To Preemptively Displace Homeless People Outside His BID Boundaries — Less Importantly Years Later He’s Still Whining About The Chinatown Walmart Fiasco As He Lambastes Outsiders From Alhambra For Daring To Have An Opinion — And In More Aggro Yu-ian Weirdness, Admonishes Public Commenters To Keep It Short And Cut The “Bullshit””