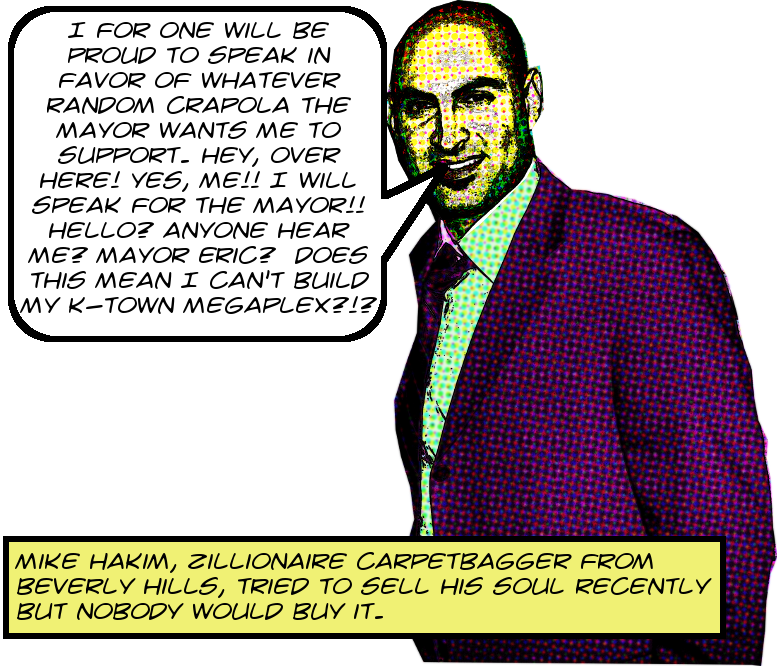 I wrote last month about an interesting incident in which Eric Garcetti asked Mike Russell of the Wilshire Center BID to arrange for a tame zillionaire1 to speak at the joint Garcetti/Wesson press conference announcing the star-crossed Koreatown homeless shelter which was, at that time, being proposed by Wesson. Mike Hakim, Beverly Hills zillionaire and proponent of a universally reviled K-Town skyscraper, volunteered but Mike Russell and Eric Garcetti went with Beverly Hills zillionairette Brenda Arianpour instead.

Well, the other day I got a whole new set of emails from Mr. Mike Russell,2 which you can read all of right here on the Archive. And amongst these were some that told the rest of the story. It seems that after Mike Hakim volunteered, while Mike Russell and Eric Garcetti’s communications staff were busy fluffing Brenda Arianpour for her big day, no one bothered to tell Mike Hakim that his contributions were unwanted.

Finally, days later, like the little sad clown he tries so hard not to be, he emailed Mike Russell reminding him that he was willing to speak. Mike Russell, never one to waste an opportunity, told Mike Hakim that Eric Garcetti liked Brenda Arianpour better, even though mostly Mike Russell chose her, and then had the nerve to tell Mike Hakim that the Mayor still wanted him to show up and act like he supported the whole thing.

The record doesn’t show that Mike Hakim responded, but day of he regained some of his highly compromised personal dignity and said he couldn’t make it because traffic. And that, friends, is the whole tragedy laid out for your sympathy. Don’t ever think those zillionaire developers from Beverly Hills have it easy. Their lives are harder than yours in ways you can’t even imagine until you’ve earned or inherited your first zillion.

Turn the page, as always, for transcriptions of everything.

So like I said above, read here for the first installment of this story, where Mike Russell, at the behest of various Garcetti staffers, tried to recruit putative small business owners to speak in favor of the K-Town shelter and ended by hooking real estate developatrix Brenda Arianpour up with the Mayoral propaganda machine. At that time, Mike Hakim also volunteered:

Just Advise on some talking points

And the very next morning Mike Russell broke five days of silence with an email informing Mike Hakim that he’d been silently passed over but that the politicos still required his cheerful presence to talk with their teams, whatever that even means:

Thank you for the email. The Mayors team has selected Brenda to speak from our Board. They would still like you and other board members to attend to show support and speak with the Mayor and Council member’s teams. I will be there.

Please attend if you are still available.

And then silence. No yes, no no. Until May 2, in the morning, seven minutes before the scheduled start of the press conference. Mike Hakim had his revenge. But it’s so revealing of his hurt feelings that it hardly counts. Plus, for extra bathos points, Mike Hakim doesn’t seem to realize that no one would have noticed if he just silently didn’t show up. Like I said above, super hard lives. In ways unimaginable to us, the hoi polloi. In fact, we’re the privileged ones. Privileged not to have to suffer like this. Anyway, that’s the story and here’s the last email:

Looks like the traffic got the best of me… Good Luck today! Let me know how it goes.

Image of Mike Hakim is ©2018 MichaelKohlhaas.Org and is changed up outta this guy here.