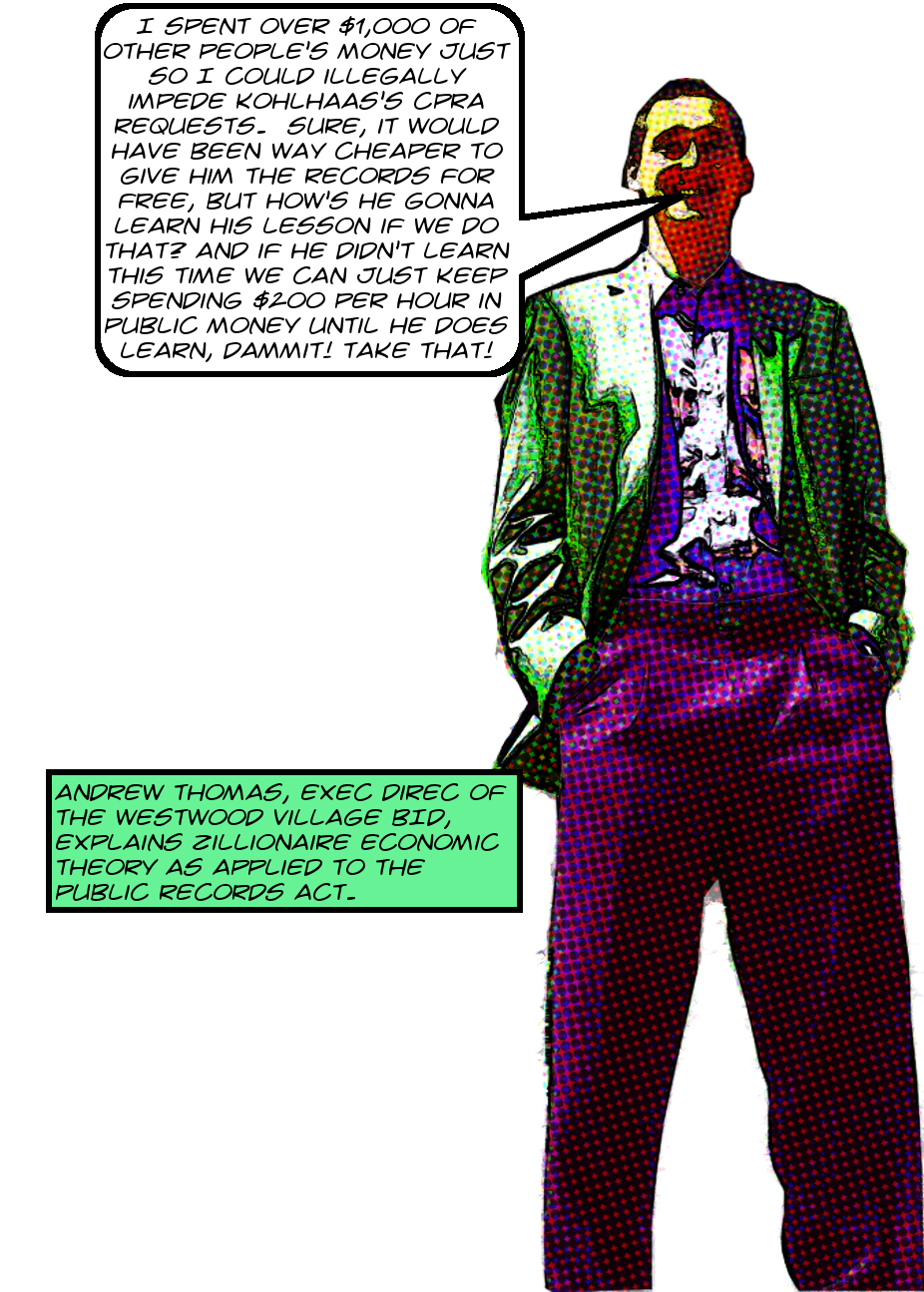 NOTE: This post is turning out to be way longer than I thought, so I figured I’d better link to the actual public records it’s based on up here at the top. New for your perusal and edification are three contracts between the Westwood Village BID and various persons, including Exec Direc Andrew Lloyd Thomas and the BID security provider. Read ’em and weep, friends.

While you all have been enjoying my recent reporting on the Westwood Village BIDdies and their conspiracy with a bunch of UCLA students who feel like the boring homeowners on the Westwood Neighborhood Council don’t approve of enough liquor licenses and happy hours in the Village and whatnot, there has actually been a whole other story seething below the surface, some aspects of which I am writing today to tell you about!

You see, this isn’t just about me, the California Public Records Act, and Andrew Thomas, but also about Andrew Thomas’s lawyer, Carol Humiston, the ballistic barrister of Burbank.1 Carol Humiston,2 who lawyers for a lot of BIDs, has this CPRA system which she evidently believes is going to learn me not to bother her clients any more.3 Well, aside from the fact that no one’s managed to learn me anything since about 1974, her fanaticism ends up needlessly costing her clients a ton of money.4

But of course, it’s other people’s money that they’re spending, funded as they are by coercively collected assessments on property, which clearly makes it easier for them to spend, but which hardly seems ethical. One way in which she does this is to tell them a bunch of untenable crap about what they’re allowed to withhold5 so that they feel that they have the right to redact a bunch of really obviously not legally redactable information.

They do this by printing electronic documents on to pieces of paper, crossing things out with a marker, and then claiming that they have the right to charge me for copying that record.6 If, however, they had not printed and redacted, had the record stayed in its electronic format, I would have been able to get a copy at a marginal cost of zero.7 One effect of this tactic is to raise the cost of obtaining copies astronomically.

Like for instance, according to Andrew Thomas in response to my two requests to his infernal BID there were more than 500 sheets of printed-out emails that he had to redact. He proposed to charge me $0.10 per page to copy these. Thus, in order to obtain copies of all the records he deigned to produce, he wanted me to pay him more than $60.8 In one sense this isn’t that much money, but over the long run it’s a lot of money.9 I can’t actually afford to pay sixty dollars multiple times per year to every hapless joker who hires Carol Humiston to get copies of a bunch of emails, over 90% of which on average are pretty useless.10

Fortunately the framers of the CPRA seem to have anticipated this very tactic. A constitutional right such as the right to look at Andrew Thomas’s emails isn’t worth very much if he and Carol Humiston can cook up a pathetic little strategy for charging anyone $60 any time they want to exercise it. Thus the CPRA requires BIDs11 to make records available for inspection at no charge.12 And if Carol Humiston and her creepy little clients will insist on charging such outrageous fees for copies, it’s possible to go out to the BID and look over all the material for free, take pictures of some items and possibly pay for copies of individually selected items if it seems worth the money.

And not just as difficult as possible for would-be record inspectors, but also for her clients themselves. The weirdest example I know is hinted at in this May 2017 email from batty little fusspot Blair Besten in which she explains that, in order for me to inspect records at the Historic Core BID, both her and her flipped out flunky Paola Flores and “a male” will have to be present.14 Well, Andrew Thomas is putatively “a male” himself,15 but despite that he didn’t feel the need to have any “females” present. He did insist on a security guard, though, or an ambassador, or whatever they’re calling these folks.

So imagine this, then. I went in as agreed at 9:30 a.m. He had all 500+ sheets laid out on a table in piles and a computer so that I could inspect the records. The security guard sat to my left and Andrew Thomas sat uncomfortably close to me on my right. And there we sat for 180 minutes while I read papers, took notes, and asked Andrew Thomas questions, most of which he wouldn’t answer. He did refuse to let me take pictures of papers, and he called Carol Humiston about eleventy jillion times.

Then at noon, drunk on his delusions of power,16 he arbitrarily decided I had to stop looking at records and go home because he wanted to eat lunch.17 Well, I wasn’t done, not in the least, and didn’t want to stop, since it takes over an hour to get there on the bus, with two transfers.18 So I had to make another appointment, a week later, and this time Carol Humiston specified that I could only look at records for two and a half hours. So I did.

By the end of five hours I was sure that I needed all the electronic records, and despite his bullshit illegal rationalizations about the USB thing and it costing $10 (for transferring 55 MB, don’t forget) I paid him.19 As you may recall, these are available on Archive.Org. Also I found about fifty paper pages I really needed, and I was out of time for photography, so I paid him for those.20

I completely understand what this BID21 thinks its gaining by making inspections difficult and expensive for me. They think, Carol Humiston probably tells them, that if they make me pay in time and cash then I will give up eventually. But there’s a real mystery here, which is what does the BID hope to gain from making my inspections difficult and expensive for themselves to arrange? That is, Humiston clients universally require from one to three observers to sit with me and stare at me while I inspect records.22

And it’s not just their time they’re wasting, but their actual money as well. And the way Andrew Thomas practically writhed in his unseemly paleocortical pleasure at having what he thought was the upper hand with me just finally really made me determine to find out how much all this nonsense was costing the BID.

Hence I asked him, during one of these inspection periods, for a copy of his contract and the BID’s contract with their security provider23 so I could calculate just how much everyone got paid. And eventually, believe it or not, I did get copies of his contract and of the BID’s contract with their security provider.24 Thus it’s now possible to calculate the actual per-hour human cost of the BID having Andrew Thomas and a security guard sitting there staring at me! 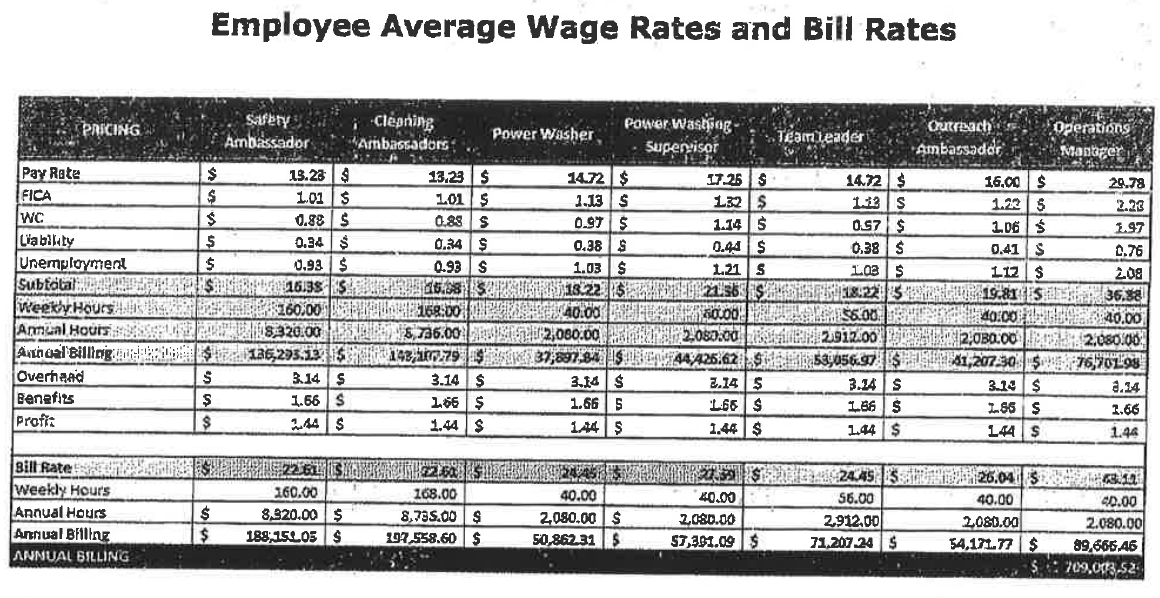 Let’s start with the security guard. The bill rates for security guards of different sorts are found on page 13 of the contract. There are seven kinds of security guards, and I don’t know which kind I had. The bill rates25 vary quite wildly. However, once we throw out the outlier at $43.11 and the power-washing supervisor, which this guy didn’t seem to be, the range is from $22.61 to $25.04, so let’s just say $24 per hour, which is slightly more than the average of those two.26

And now on to Andrew Thomas who, as befits a quite complex character, requires more complex calculations. First of all, the contract took effect on January 1, 2017. At that time Andrew Thomas was paid $135,000 per year. He’s eligible for a 10% bonus and a 4% cost of living increase. They also give him $1,000 per month for health insurance and contribute 5% to his retirement. Thus we’re looking at annual compensation of

work days he gets paid to miss, for a total of 225 days worked. We’ll generously assume 8 hours per any day he actually shows up for a total of

hours worked. This gives him an hourly cost to the BID of

So this is a direct cost to the BID of $125 per hour in personnel for me to inspect records, which means the five hours (so far) that I’ve spent looking at these records has cost the BID $625. But don’t forget that Andrew Thomas, who is incapable of making decisions on his own, calls Carol Humiston frequently during the inspection process. She’s not talking to him for free, is she?

And then there’s all the time he spent doing the nonsensical redactions in the first place. The total is unknowable, but it’s clearly over $1,000 at this point.27 So unless the BID is getting something really valuable out of this whole process, it really appears that they’ve spent more than $1,000 to prevent me from getting $50 worth of copies without paying for them.

And there’s not really any cap on their liability. The law gives me the right to inspect that same stack of papers pretty much forever. I may not need to do that, but it’s hard to tell how much time I will need with them. As with all scholarly subjects, the deeper one’s understanding, the more study is needed.

They can limit the rate at which I inspect28 but they can’t prevent me from costing them $125 per hour for the rest of eternity. I mean, they could prevent it by just acting like reasonable human beings, not redacting people’s business email addresses, not sitting around breathing down my neck while I looked at the papers, and so on. But will they? Without understanding their motives it’s hard to be sure. Perhaps they’ll come around eventually.

By the way, this kind of unintelligible money-burning kookiness is yet another reason why the City of Los Angeles really needs some kind of intermediate dispute resolution process for CPRA matters, like e.g. a Sunshine Ordinance. These are laws that supplement the CPRA and make it locally much more expansive. San Francisco’s law is an excellent example.

This post is already too long as it is, so I’ll forgo describing the actual parts of the San Francisco Sunshine Ordinance that would prohibit each and every one of Carol Humiston’s bizarro obstructionist tactics, but the law will really repay close study. If we had a law like that we could settle this nonsense before a City commission rather than having only our two present extreme options of either submission or petition. Maybe some day, eh friends?

Image of Andrew Thomas all dressed up like an icky-sticky-coo-coo is ©2018 MichaelKohlhaas.Org and is an über-modified re-envisioning of this Andrew Thomas thing here.