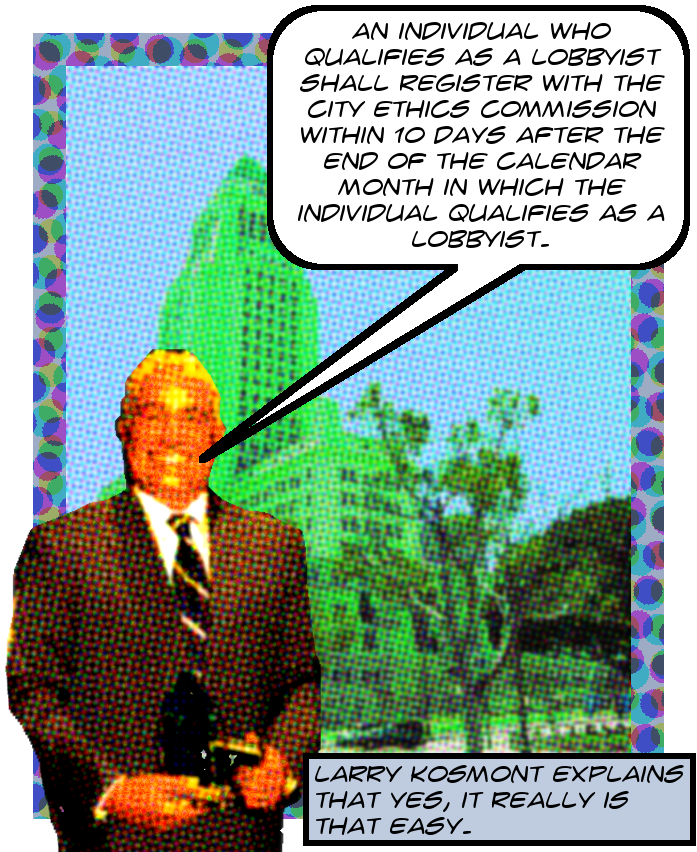 It’s a long term project of mine to turn in as many BID consultants as possible to the City Ethics Commission for failing to register as lobbyists. So far, though, I’ve only managed to report Tara Devine for her work on the Venice Beach BID because the work is so involved. Such a report has two essential components:

It occurred to me recently that the first argument will be the same for all BID consultants, and that therefore it would be possible to streamline the reporting process by writing it up in a generic format that would apply to any given BID consultant. So that’s what I did, and you can read the result here. I will be using this to make a number of complaints against BID consultants in the near future, which I will report on here.

Meanwhile, if you have no idea what I’m talking about, you can find explanations of everything after the break, along with a fairly detailed summary of the argument that BID consultancy qualifies as lobbying under the MLO.

First let’s talk about lobbying in Los Angeles. According to the Municipal Lobbying Ordinance at LAMC §48.02, lobbying activity:

… includes the following and similar compensated conduct when that conduct is related to a direct communication to influence any municipal legislation:

(1) engaging in, either personally or through an agent, written or oral direct communication with a City official;

(3) providing advice or recommending strategy to a client or others;

(6) attending or monitoring City meetings, hearings or other events.

… means any individual who is compensated to spend 30 or more hours in any consecutive three-month period engaged in lobbying activities which include at least one direct communication with a City official or employee, conducted either personally or through agents, for the purpose of attempting to influence municipal legislation on behalf of any person.

So a lobbyist is someone who’s paid for 30 hours of lobbying activity over three consecutive months1 and as part of it talks to City officials while trying to influence municipal legislation.2 And if someone qualifies as a lobbyist by satisfying the terms of these definitions, they’re required by LAMC §48.07(A) to register with the Ethics Commission.

Now on to BID consultancy! The process for establishing a new business improvement district or renewing an old one3 is complicated enough that BIDs usually hire a consultant to guide them through it. The process is described in the Property and Business Improvement District Law of 1994, known as the PBID law, which is the state law governing all aspects of BIDs. The process as it works in practice in the City of Los Angeles is described in this establishment/renewal timeline published by the City Clerk’s office.4

Here are the main steps in the process, along with arguments that they involve lobbying activity as defined in the MLO:

◼ The first stage in the BID formation process is to convince the City Council to pass a so-called ordinance of intention to form the BID. This is explained in the PBID law at §36621(a). It’s also municipal legislation as defined in the MLO, which is necessary5 for the consultant’s activities to count as lobbying.

◼ The people who want to start the BID collect petitions from property owners and submit them to the City Council via the Clerk’s office. This is mandated by the PBID law at §36621(a). The the timeline notes that this includes a Follow up campaign to secure signed petitions…. Since the purpose of these petitions is to allow the Council to pass the ordinance of intention, this “Follow up campaign” constitutes seeking to influence the position of a third party on municipal legislation and is therefore lobbying activity.

◼ Once the ordinance of intention is passed the BID proponents have to put together an immense amount of information with the ultimate goal of having the City Council pass a so-called ordinance of formation, which actually creates the BID. This is explained in the PBID law at §36625. Most importantly, this is another instance of municipal legislation as defined in the MLO, which again is necessary for the consultant’s activities in support of this step to count as lobbying.

◼ In support of the ordinance of formation, the proponents have to create a so-called management district plan (MDP) as described in the PBID law at §36622. This document is a necessary part of the ordinance of formation, so all parts of its creation which are described in the MLO count as lobbying. For instance, the MDP must include a detailed list of all property parcels to be assessed in the BID. Compiling such a list requires significant research in the County property records, and is thus “research, investigation and information gathering” in support of municipal legislation.

◼ The creation of the property list also entails a great deal of back-and-forth with the Clerk’s office. This is essential because in order for a project to constitute lobbying according to the MLO it’s necessary that it involve communication with City officials. This aspect of the process is described in the timeline as follows: CITY CLERK will review Management District Plan to ensure compliance with state law. NOTE: revisions may be needed to ensure compliance with legal statutes. In practice, as you can see from the case of Tara Devine, this involves months of discussion between the consultant and the Clerk’s office, which is more than enough to satisfy the requirements of the MLO.6

◼ Furthermore, the MDP is incorporated into the final ordinance of formation. To see this, e.g., you can take a look at the ordinance for the Venice Beach BID. Since the MDP is an actual part of the ordinance, this means that the process of writing the MDP, carried out by the BID consultant, constitutes “drafting ordinances, resolutions or regulations” as described in the MLO.

So that’s an outline of the generic argument that BID consultancy constitutes lobbying activity. As I mentioned above, it’s the basis of this report on the matter. The idea is to use that generic argument along with specific proof that a given BID consultant was paid for 30 hours over three consecutive months to argue that the registration requirement found in the MLO at LAMC §48.07 is triggered. This can be done efficiently via invoices obtained from BIDs via the California Public Records Act.

Since most BID consultants don’t register, the hope is that the Ethics Commission will impose beaucoup de sanctions on these parasites. The possible sanctions are discussed in the MLO at LAMC §48.09 and include large fines and, in egregious cases (involving intentional violations), a prohibition on lobbying for up to a year. And, if you’ve been following my progress on this project for a while, you may remember that some BID consultants actually do register as lobbyists. The most prominent example is Larry Kosmont, who quite properly and quite thoroughly disclosed his work for the Gateway to LA BID as required. This fact will make it hard for the BID consultants to argue that they weren’t aware of the requirement.