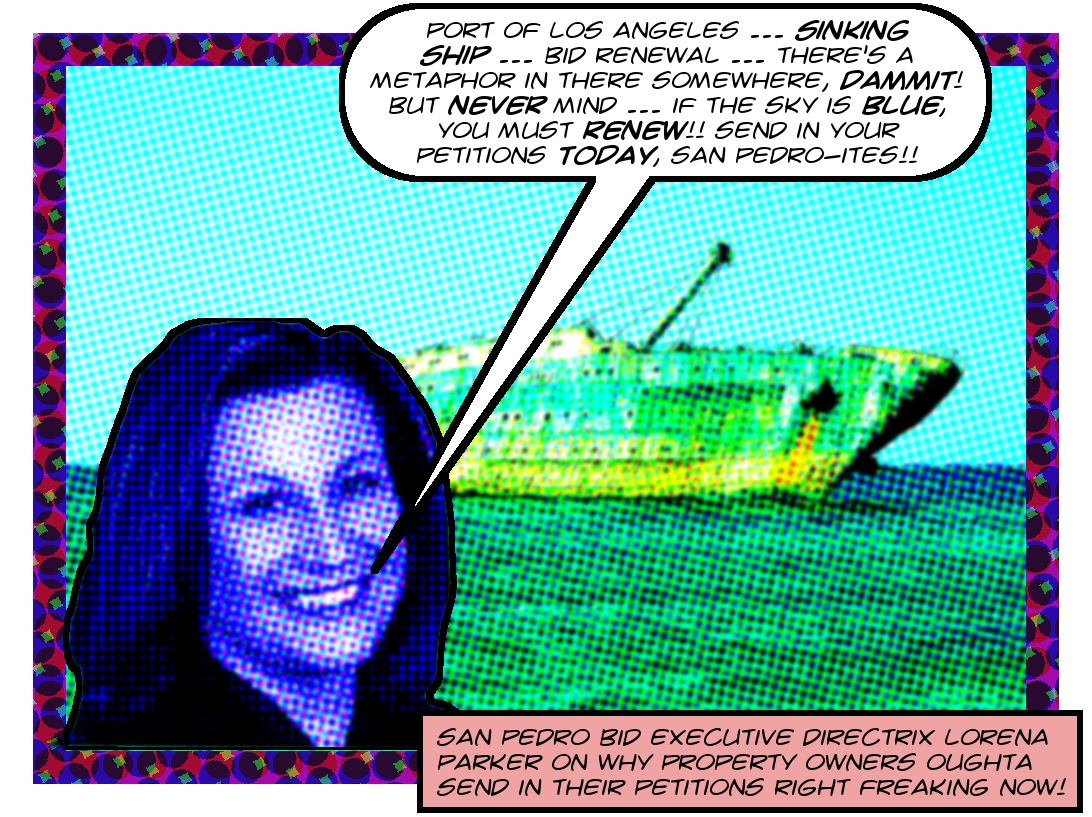 This is just a quick note to announce the availability of a first batch of renewal materials from the San Pedro Historic Waterfront BID. They’re available here on Archive.Org. These are from the petition phase, where property owners holding $1 more than 50% of the total assessed value have to petition City Council to renew their BID. I’m collecting material like this as part of a long-term project to send out countermailings when BIDs send out mailings in favor of establishment or renewal. They uniformly send blank petitions on which the only choice is to vote yes. See this sample, for instance.1

I think it would be reasonable, effective, and entertaining to send out petitions on which the only choice was no. Of course, the way the petition phase of BID renewal/establishment is structured, not voting is the same as voting no, but nevertheless, it would be politically valuable to see that property owners have a choice. In order to carry out this plan, it will also be necessary to have quick access to natively formatted copies of the mailing lists that the BIDs use. They have historically been exceedingly reluctant to give up this information.

You may, e.g., recall the fact that it took me five months of nagging Miranda Paster at the City Clerk’s office to get her to give me the mailing list for Venice Beach.2 In that case as in every other case where I’ve actually managed to obtain mailing lists, it came too late to be useful. But at some point, and this is the main reason this is a long term project, I will have convinced the BIDdies3 that they have to hand over mailing lists promptly so that they’re still politically useful.

Naturally, when sending out alt-petition forms, it will be necessary to send out alt-propaganda. Just take a look at the San Pedro BID’s info sheet that they sent out along with the petitions. Count the lies. Imagine an alt-petition that not only invites property owners to vote no on the BID but also informs them what their money’s really being spent for like, e.g., to to keep criminals from getting arrested because they can’t put out their own damn dumpster fires!

Every BID wastes its money on exactly that kind of nonsense, never publicized. This kind of campaign probably won’t stop any BIDs, but it may well increase the protest rate, which would be interesting indeed! And turn the page for links to all the items with a little bit of commentary.

The image which adorns this post is not only ©2017 MichaelKohlhaas.Org, but was patched together from this Lorena Parker headshot and also this sinking ship.