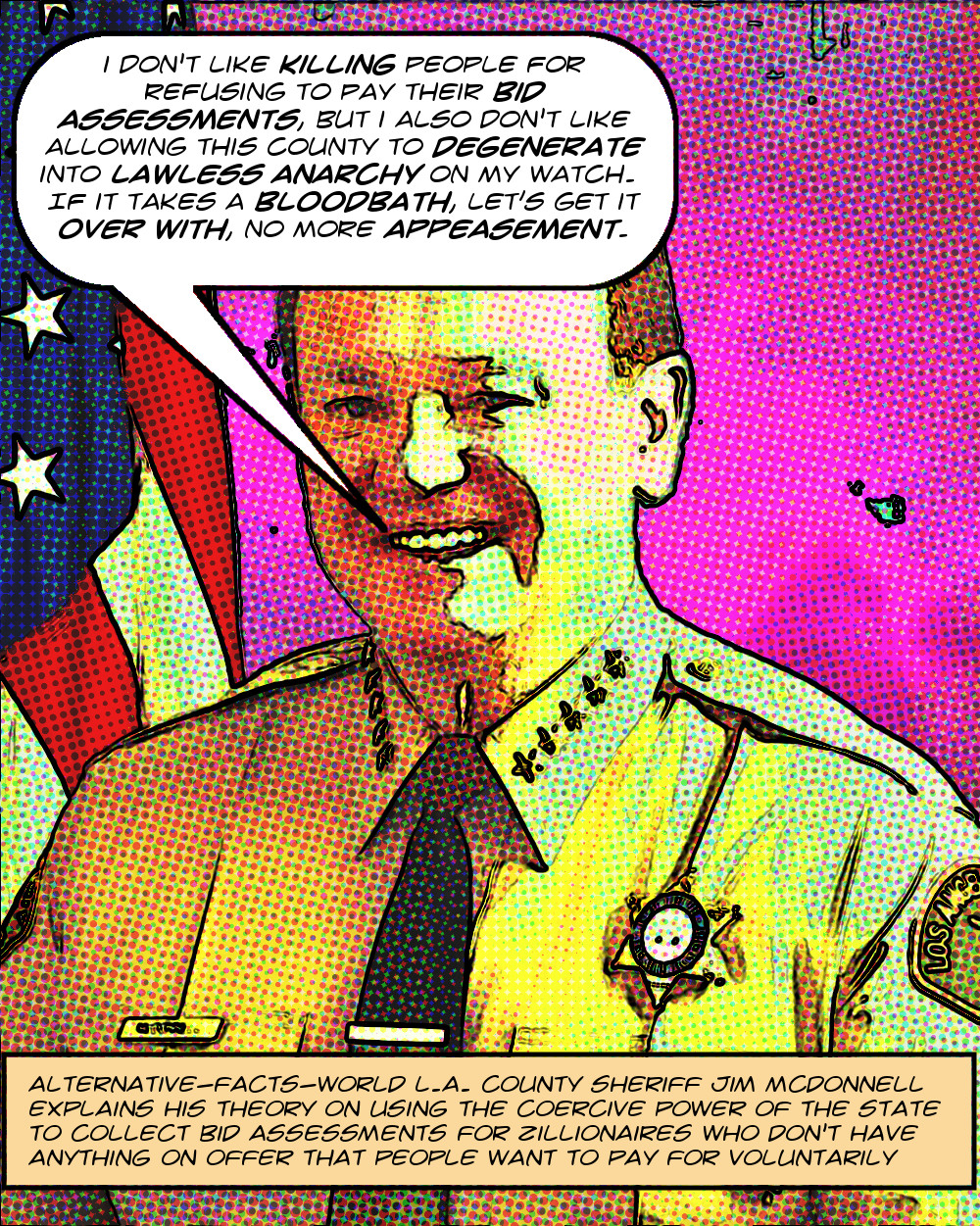 A business improvement district (BID) in Los Angeles1 is a geographical area in which the owners of commercial property are assessed an additional fee for various services that aren’t provided by the City. These fees are collected either by the City of L.A. via direct billing2 or, more usually, by the County of Los Angeles as an add-on to property tax bills.

The state law authorizing BIDs requires each BID to be administered by a property owners’ association (POA).3 In the normal course of things these organizations are conjured up by the City at the time the BID is established, although sometimes previously existing nonprofits will end up as a POA. One example of this is the Hollywood Chamber of Commerce, which serves as POA for the East Hollywood BID, although it predates its existence.

The law requires these POAs to be nonprofits, although it doesn’t specify what kind of nonprofit they should be. For various reasons, at least in Los Angeles, they are usually 501(c)(6) organizations. Because the City is handing over what’s essentially tax money to these POAs,4 they have a great deal of control over their activities and what they spend their money on.

For instance, when a BID is established by the City Council, the law5 allows the Council to completely rewrite the POA’s proposal for how the money is to be spent. After the BID is up and running, the POA is required by law6 to turn in an annual report explaining how they’re going to spend their money for the upcoming year. The City Council must approve this report, and has the right at the time of consideration to completely rewrite it if so desired.

As I said above, this kind of fine-grained control is required by the fact that the City, as their Frequently Asked Questions about BIDs document puts it, “exercise[s] its municipal authority to levy the assessment on behalf of the BID community.” A well-run local government couldn’t possibly use its taxing authority to collect money involuntarily from citizens and then hand it over to a private corporation without making sure that the purpose of the money was explicitly defined and that there were mechanisms in place to make sure that the money was spent as intended.

This isn’t just some kind of abstract moral principle, either. Once BID assessments are included in property tax bills, and once the State of California has decided to let the City of Los Angeles use what this FAQ so disingenuously calls “its municipal authority” to collect the money, the door is open for legal consequences for people who don’t pay. Just imagine how it might go. You don’t pay your assessment. They send letters. They send collectors. They sue you. They put liens on your property. They actually condemn your property so that they can confiscate it. And so on.

But what if you don’t cooperate? The sheriff7 sends some armed people around to smoke you out. If you won’t be smoked you’ll be arrested. Once it gets to that point, depending on further developments, it may well become legal to kill you. That is, when the City of Los Angeles says that it is exercising “its municipal authority” to collect assessments, what they’re glossing over is that at that point it’s at least theoretically possible that people who don’t pay can be killed. I’m not saying that it’s likely, or that it’s ever happened, or that it ever will happen. But it can happen.8

It’s essential to remember this, e.g., when reading idealized descriptions of what BIDs do. For some reason, tree-trimming always comes up in these descriptions. Check this example, also from the City’s BID FAQ:

It’s a useful exercise, when reading this kind of pie-in-the-sky-itude, to remember that the City and the BID are ultimately, under some circumstances, willing to kill in order to get those trees trimmed and watered. Or, at least, to rely not just on the City’s power to tax to get the trees trimmed, but also on the City’s power to enforce its power to tax by various forms of coercion, even violent coercion.

And having the assessments be involuntarily collected under at least the possibility of force is an immense benefit to BIDs. As that same BID FAQ has it:

By having the City assess all affected parties, the BID receives funds from everyone receiving the improvements. Persons or entities who would otherwise refuse to participate, thus burdening the remaining BID members, do participate. Similarly, the City’s BID billing process minimizes the number of members in the district who receive benefits without paying for them.

Or again, as explained in the City’s mendacious little BIDs 101 handout:

a BID makes your District official, more stable for applying to grant funding, and creates a fair and equal method of collecting financial support from everyone in the area. In a BID, everyone pays and everyone has a fair share in the organization.

So here’s where we are so far: the City uses its authority to collect money for the BIDs. It hands it over to the POAs and, at least potentially, exercises absolute authority over how it’s spent.

Now, when the state legislature passed the modern BID law, the Property and Business Improvement District Law of 1994, POAs were not made subject to either the California Public Records Act or, for that matter, the Brown Act. In fact, it took a lawsuit against the Hollywood Property Owners Alliance, which runs two of the most notorious Hollywood BIDs, by intrepid Hollywood property owner Aaron Epstein9 to obtain a ruling that POAs were public agencies rather than private corporations10 and that therefore they were subject to these laws.

Once the court ruled, the state incorporated this mandate, that POAs comply with the CPRA and the Brown Act, into the BID law.11 The court’s reasoning was strongly based on the degree of control that the City exercises over the formation and operation of POAs. The court said that POAs act like local agencies of the City government, and that therefore they are subject to California’s requirements that local agencies be transparent.

If BIDs didn’t collect compulsory assessments, the City wouldn’t be so involved in their operation, and they arguably wouldn’t be subject to the CPRA. The two, as the headline of this piece suggests, are inextricably connected. The benefits that BIDs get from having their money collected for them by force is inseparable from the burden they must bear of having to comply with the California Public Records Act.

And thus it’s just a tad hypocritical for BIDs to piss and moan about this obligation. If you read this blog regularly, or even, for that matter, sporadically, you’ll have seen story after story after story of BIDs whining about my CPRA requests. There’s Laurie Sale of the Pacific Palisades BID, complaining on the one hand that she just doesn’t have time to deal with my requests while, on the other hand, her POA is poised to spend 3% of their 2017 budget on lawyers for the purpose of evading their obligations under the law.

There’s batty little fusspot Blair Besten of the Historic Core BID, whose CPRA evasion has reached such a fevered level of surreality that I was moved to issue a commemorative coffee mug memorializing it. There’s the greasy little white supremacist BID in Larchmont Village in South Central Hollywood, which consistently ignores my requests until I get yet another lawyer to write yet another demand letter. And for every one of those stories there are bunches more that I don’t write about because they’re not amusing, they’re just sordid, stupid, and pathetic.

But how ridiculous, how immature, how hypocritical is it for BIDs to take the money and yet reject a requirement that the money entails? And it’s not just the law that makes BIDs subject to CPRA. In fact, the standard contract that POAs sign with the City of L.A. requires them to be subject to CPRA as well. What kind of twisted little pipsqueaks sign a contract and then whine about having to perform its requirements? It’s unreal.

And it’s so easy to fix, also. If these BIDdies really can’t stand being subjected to the burdens of the California Public Records Act, all they have to do, really, is to renounce compulsory collection of assessments. These are supposed to be ultra-savvy business people, after all. If they have services to provide that people in their BID actually want, then the people will pay for them without being coerced.

If property owners don’t want the services to the point that they won’t pay for them, why then, shouldn’t these self-proclaimed nimble entrepreneurs improve the services on offer rather than relying on a bunch of heavily armed sheriff’s deputies to strongarm an unwilling population into paying for stuff they don’t actually want? It happens every day that nonprofit corporations manage to collect enough money voluntarily to accomplish their purposes.

And if they can’t collect the money, well, isn’t it the good old American way that they should either adjust their purposes until they can raise enough money, or else softly and suddenly vanish away?12 They could take as their model our friends at the Hollywood Chamber of Commerce, also a 501(c)(6) organization, but one which presumably does stuff that its members actually want done, so that they pay their dues voluntarily, and thus, miracle of miracles, the Hollywood Chamber can keep its emails secret from the prying eyes of busybodies like me.13

I don’t actually expect BIDs to give up coerced assessments. I don’t even expect them to stop obstructing my CPRA activities. But it does seem within the realm of possibility, at least on this dreamily delusional Sunday, that they might eventually realize that they’re not going to get mandatory money handed to them without being subject to CPRA and that, therefore, maybe, just maybe, they ought to stop whining about my requests.

Image of L.A. County Sheriff Jim McDonnell was originally a public record, which I obtained via Wikimedia but now, after the tender ministrations of the MK.Org guerrilla image adaptation squad, it turns out to be, for reasons essentially beyond our control,14 ©2017 MichaelKohlhaas.Org.