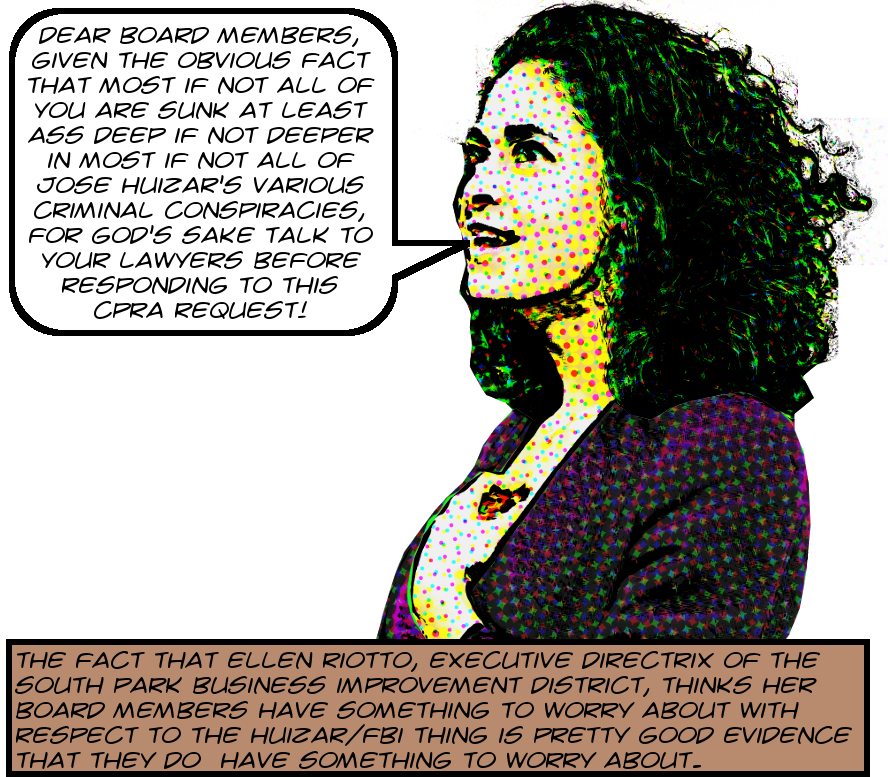 For, you see, in response to a whole different request, the BID sent over a little slap in the face, which is to say this email from BID Executive Director Ellen Salome Riotto advising the BID Boardies on responding to the earlier request. Basically she told them that because the FBI is investigating their buddy Huizar they should talk to their damn lawyers before sending over any records, which to this legal amateur looks a whole freaking heck of a damn lot like consciousness of guilt. But she can speak for herself better than I could speak for her:
END_OF_DOCUMENT_TOKEN_TO_BE_REPLACED 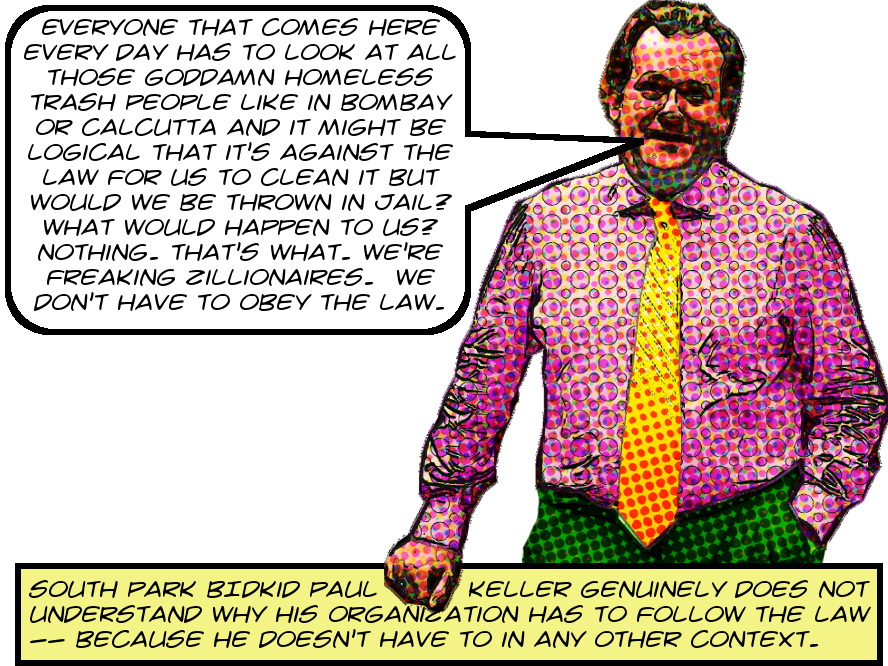 Last Thursday morning off I went to the concrete canyons of Downtown Los Angeles to sit through yet another interminable gathering of the Board of Directors of the South Park BID and, just for you, dear reader, I have posted video of the whole damn thing both here on YouTube and here on Archive.org. And it was mostly more of the same old bad BIDness, but without a quorum, so no action was taken.

There were a few interesting episodes though, and I’ll be writing about one or more of them soon enough, but the text for today’s sermon is this little hissy fit, pitched by none other than the finest legal mind of his generation, that is to say self-proclaimed schmuck Paul Keller, accompanied by the narcissistic back-up harmony vocal stylings of the BID’s own Uncle Fester,1 which is to say Bob Freaking Buente. There is, of course, a transcription of the whole damn thing after the break, and juicy quotes interspersed throughout the article here.

Paul Keller wants to talk about … underpasses. The ones he drives under when he gets off the freeway in the morning. They’re filled with homeless people. Paul Keller doesn’t like this. Bob Buente reminds him that in zillionairese underpasses are referred to as “Bombay” and/or “Calcutta.”2 What he really seems to hate about them is that (a) they are offensive to his finely honed zillionaire aesthetics and (b) he can’t ignore them because there’s a traffic signal there: “But unfortunately the light causes you to be in Bombay if it’s red.” The problem evidently is that CalTrans has jurisdiction over underpasses so the usual zillionaire methods of getting shit done, like e.g. giving José Huizar another 700 bucks, aren’t effective.

Turn the page to learn what the other problem is, how Ellen Salome Riotto schooled Paul Keller a little bit but he just won’t listen and wants her to break the law anyway, and the big reveal! All the Downtown BIDs are compiling anti-homeless intelligence which they’re evidently going to pass on to Miguel Santiago, possibly in anticipation of his becoming CD14 repster in 2020 because José Huizar’s rapey incontinence has effectively torpedoed the political ambitions of the other Huizar, his hand-picked successor, that is, of course, Richelle.
END_OF_DOCUMENT_TOKEN_TO_BE_REPLACED