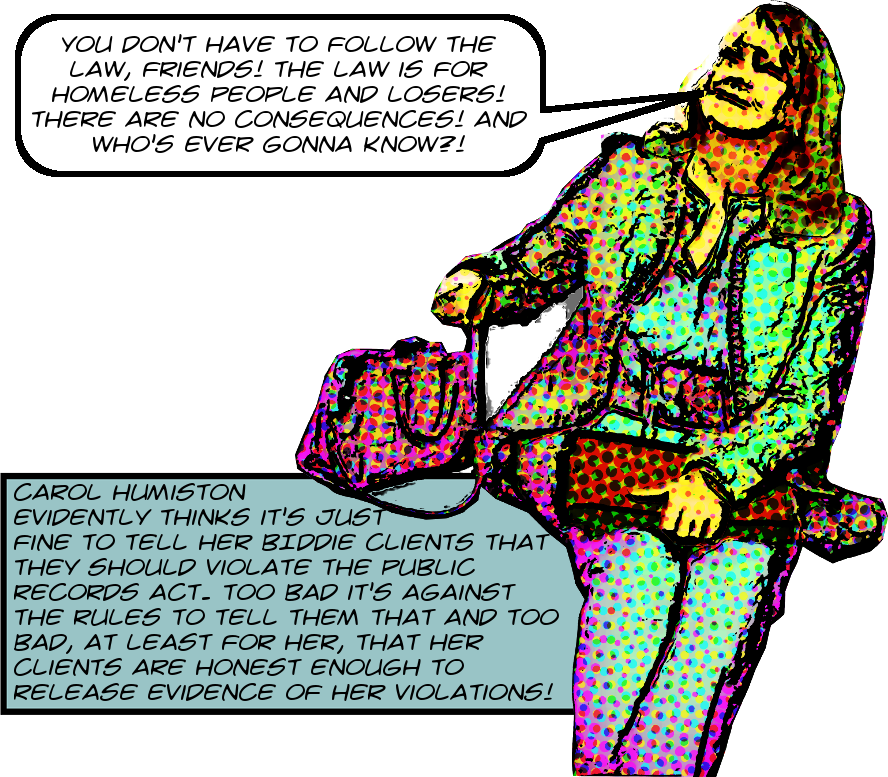 Carol Humiston, the world’s angriest CPRA lawyer, advises a bunch of L.A. business improvement districts on how to thwart my CPRA requests. She even held a seminar about me last summer for random BIDs that weren’t even her client to teach them her angry CPRA-thwarting methods. And, you know, I don’t like her methods, and I don’t like her clients, and I don’t like her. But I do like the fact that all people, even Satan-worshipping BIDdies who see violence against homeless people as a sacrament and guns as a masturbation aid, have a right to advice from counsel on how to further their goals within the bounds imposed by the law.

That last clause is essential, though. We do not want lawyers running around telling people that they ought to break the law and then using their special lawyerly powers to show them how to break it more effectively. In return for the powers granted to lawyers by society, they’re required to follow some minimal set of rules. And one of those rules is Rule 1.2.1, which states unequivocally that:

A lawyer shall not counsel a client to engage, or assist a client in conduct that the lawyer knows is criminal, fraudulent, or a violation of any law, rule, or ruling of a tribunal.

But some emails, ironically obtained from the South Park BID in response to a CPRA request, prove that that’s precisely what Carol Humiston has done. She explicitly counseled the South Park BIDdies to engage in conduct that she knew was a violation of the CPRA. And that, friends, is why, just yesterday afternoon, I filed this complaint against her with the California State Bar. You can read the painful details after the break, both of her advice and the sections of the CPRA she advised the South Park BID to violate, including copies of the actual emails in which she gave the advice.

OK, you probably recall that the CPRA allows public agencies to charge for providing copies of electronic records, but no more than “the direct cost of producing a copy of a record in an electronic format.”1 This is an essential element of the law, the purpose of which is to increase access to records. If there were no limitation on the ability of public agencies to charge for copies of electronic records they’d certainly charge outrageously high fees to discourage or to punish requesters.

Need proof? Well, just take a look at this email from Carol Humiston to Katie Kiefer, formerly the SPBID’s director of operations,2 telling her to require me to purchase USB drives for every one of my requests and to purposely buy drives that are too small so that they can make me pay for more than one. The fact that they’re requiring USB drives rather than using Dropbox is only arguably a violation of the CPRA’s limitation on copying fees, but the advice to purposely force me to buy multiple drives is clearly a violation. Here, read the whole damn thing, including Humiston’s gleeful admonition about how they need to make me pay:

And we are still meeting on Monday?
Carol A. Humiston, Esq.
Bradley & Gmelich

Oh, but there is one exception to the CPRA’s prohibition on charging more than the direct cost of copying for electronic records. It’s found in §6253.9(b), which states:

(1) In order to comply with the provisions of subdivision (a), the public agency would be required to produce a copy of an electronic record and the record is one that is produced only at otherwise regularly scheduled intervals.

(2) The request would require data compilation, extraction, or programming to produce the record.

This applies to things like e.g. running a report against a database or something. I’ve seen legitimate invocations of this section by the Los Angeles City Attorney’s office, which maintains an SQL database of all prosecutions. So if you want to get a list of all prosecutions for violating a specific section of the LAMC or in a specific location, they have to write an SQL query to produce the report. This takes actual time by an actual person, and I don’t like it but guess I will admit that it makes some sense to charge requesters for it. More importantly, though, even though I don’t particularly like that section of the statute, this is clearly a legitimate application of it.

On the other hand, suppose there are multiple file formats in which an agency could provide a record. The only difference, just imagine, is that one required programming to produce and the other did not. What if an agency were to purposely choose the one that required programming just so they could charge for it? Well, obviously that’s a violation of §6253.9(a) since in this case charging for programming is charging more than the direct cost of duplication. Don’t believe that an agency would do this? Well, just take a look at this email from Humiston to Kiefer and Ellen Salome Riotto advising exactly that:

Yes it is a hassle and time consuming to copy the emails from the PST format and save them in a PST format, but that does not mean you do not have to do it. That is why I suggested in my draft response that he has to pay for it. It is significantly faster to store in msg (I tried both processes just to see) and that is a format he will accept but …then there is no cost to him.

And finally, the CPRA requires public agencies to make a reasonable effort to locate requested records.3 This has to be the case, of course, otherwise public agencies could just not look for anything and tell the requester that they hadn’t found any records. Don’t think this would happen? Well, just look at this fairly long email conversation between Carol Humiston and a bunch of people after I asked for emails from some South Park BID Board members. Here she tells one of their lawyers that she advises the BID to “ask the Board member and … accept the Board members’ response that they have no emails.”

In other words, wink wink, if the Board member says they don’t have any emails that’s the end of that. And her clients, not just the South Park BID, universally do this. Not all the Board members, but there are always a few who just never happen to have a single email related to their work with the BID. Obviously they’re lying, and now for the first time we can see why. Their lawyer, Carol Humiston, told them to lie because, she thinks, there will be no consequences. That may not turn out to be true, Ms. Humiston! There may at least be some consequences for you, advising your clients to lie and break the law!

So these three episodes are the basis for my complaint against Humiston to the California Bar Association. These things, of course, take forever to work their way through the system. The Bar Association estimates six months. But I’ll update you here or on Twitter, so stay tuned!

Image of Carol Ann Humiston is ©2019 MichaelKohlhaas.Org and is fiddled about with from a teensy bit of this most worthwhile video.