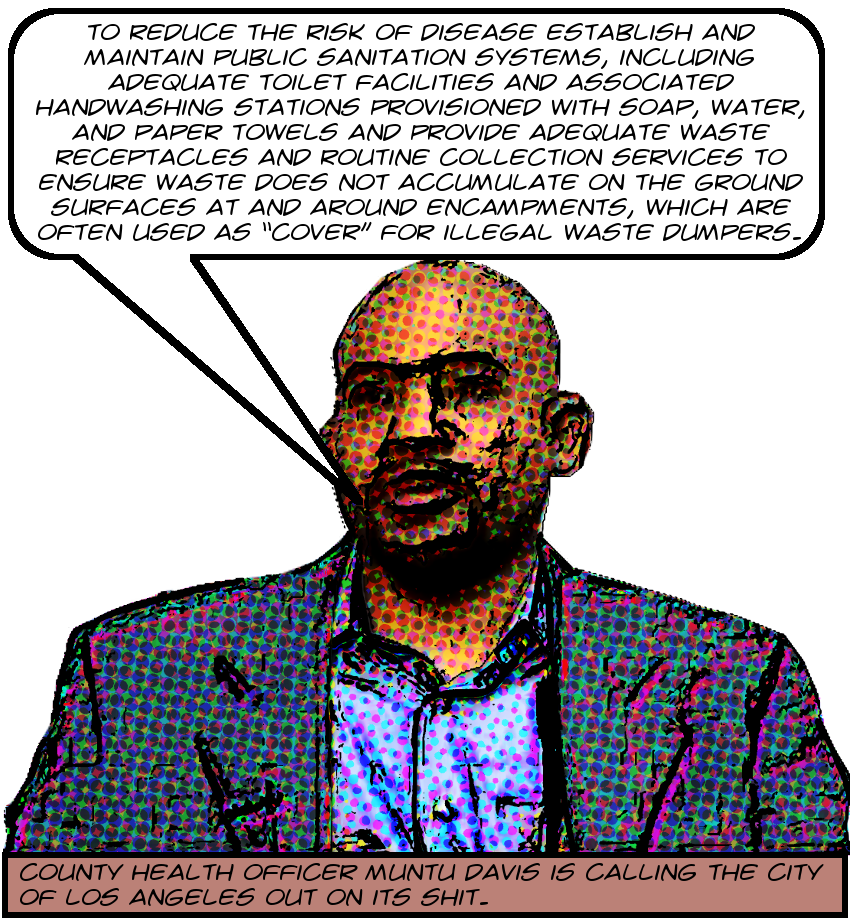 No one reading this blog needs a recap of the City’s persistent homelessness crisis or the pain, suffering, torment, and disease caused by the City government’s inaction and worse, although this LA Times editorial lays out the basic facts well. And on June 7, 2019, as reported by the Times on June 8, the County of Los Angeles public health officer Muntu Davis wrote a scathing letter to the City memorializing a June 5 meeting about illegal trash dumping in Skid Row, homelessness, associated health dangers, and the City’s utter failure in dealing with these matters.

For as-yet-unknown reasons, the Times did not obtain a copy of the letter itself, offering nothing more by way of explanation than the laconic statement that “[t]he county’s Department of Public Health declined to release the letter”. Well, this aggression will not stand, man, so I asked the County to cough up this essential piece of our City’s history and, yesterday, surprisingly quickly, they actually did! You can get your own copy of the letter here, and there’s a transcription below. They also sent an unasked-for but nevertheless welcome letter from Davis to the City about typhus outbreaks, sent in March 2019, and you can get a copy of that one here.

The June 7 letter is an essential document. Davis essentially lambastes the City for their failure to provide basic tools of sanitation — toilets, sinks, showers, trash receptacles — to people living on the street. He also notes the City’s failure to deal with illegal trash dumping and also notes that encampments are often very wrongly blamed for this severe problem, a fact that I have never seen any evidence that anyone from the City understands.

I don’t know what if any role this letter played in the City’s very recent conversion to many of the essential principles espoused by the heroic Services Not Sweeps Coalition. I suspect that that’s been longer in coming and that relentless and unanswerable pressure from activists is more responsible, although I don’t know. The letter, anyway, certainly didn’t hurt. It’s well worth the time it will take you to read it.
END_OF_DOCUMENT_TOKEN_TO_BE_REPLACED 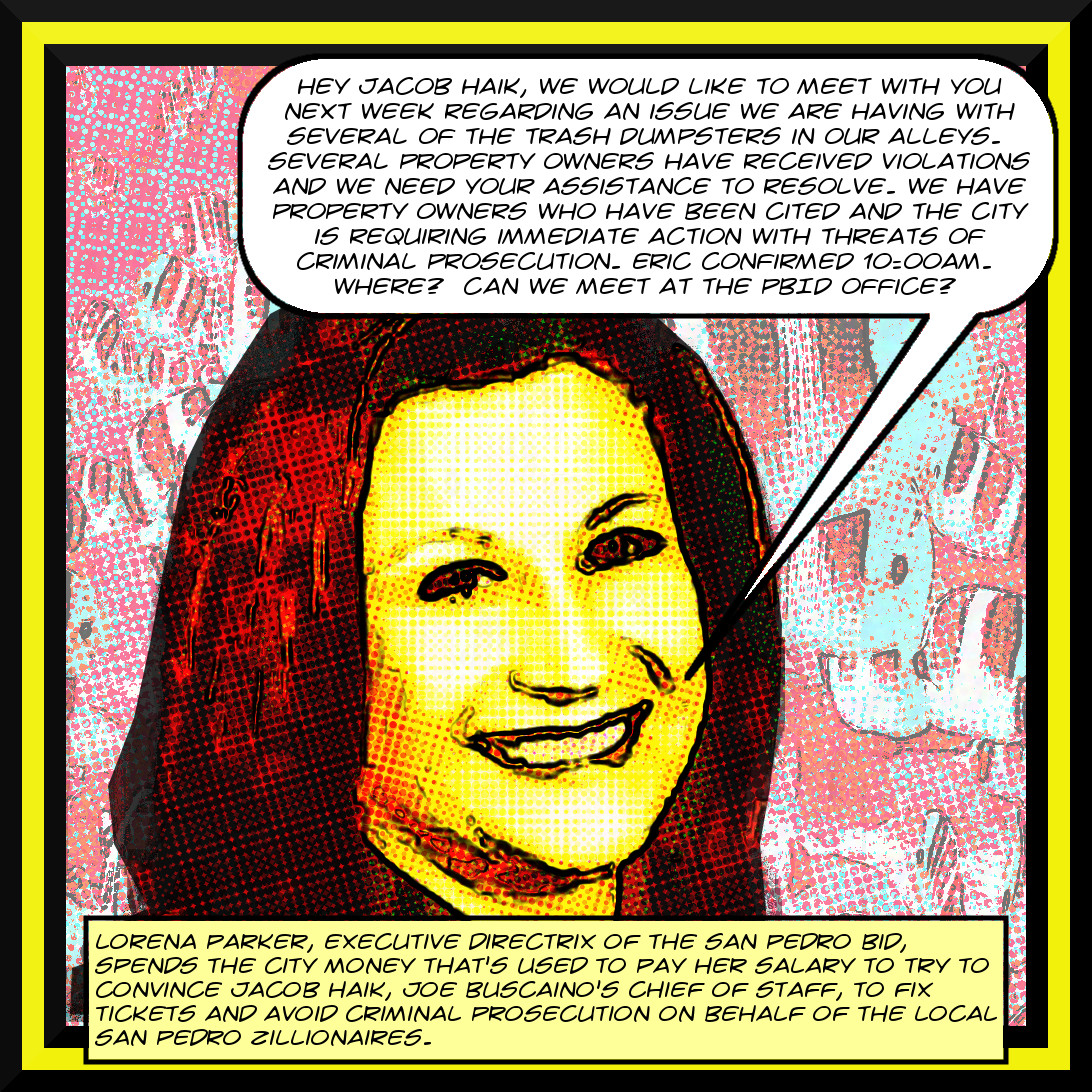 And why would anyone think this is OK? Aside from the fact that having Lorena Parker act as a fixer isn’t listed in the MDP, there’s the simple fact that if people have criminal charges pending against them based on the unsanitary state of their dumpsters, they ought not to be seeking intercession to halt the proceedings. Instead, they ought to clean up their damn dumpsters. This is citizenship 101.5 And the elected officials of the City ought to be enforcing the City’s laws for the benefit of its citizens, rather than meeting with zillionaires in an attempt to subvert them.
END_OF_DOCUMENT_TOKEN_TO_BE_REPLACED

Recall that, at its Board meeting on February 18, 2016, the Hollywood Property Owners Alliance spent over 40 minutes discussing LAPD’s request to have the BID Patrol work until 4 a.m. on weekends. Andrews International VP Bill Farrar recounted a meeting with CD13 representative Mitch O’Farrell, claiming that the CM was eager to cover the costs. This led me to write to O’Farrell opposing this plan. Now, at the Central Hollywood Coalition Board meeting that took place on Tuesday, March 8, Steve Seyler and Kerry Morrison announced that, not only are the plans to extend the BID Patrol’s hours cancelled, but Peter Zarcone, formerly CO of LAPD’s Hollywood Division, has been transferred to 77th Street.
END_OF_DOCUMENT_TOKEN_TO_BE_REPLACED