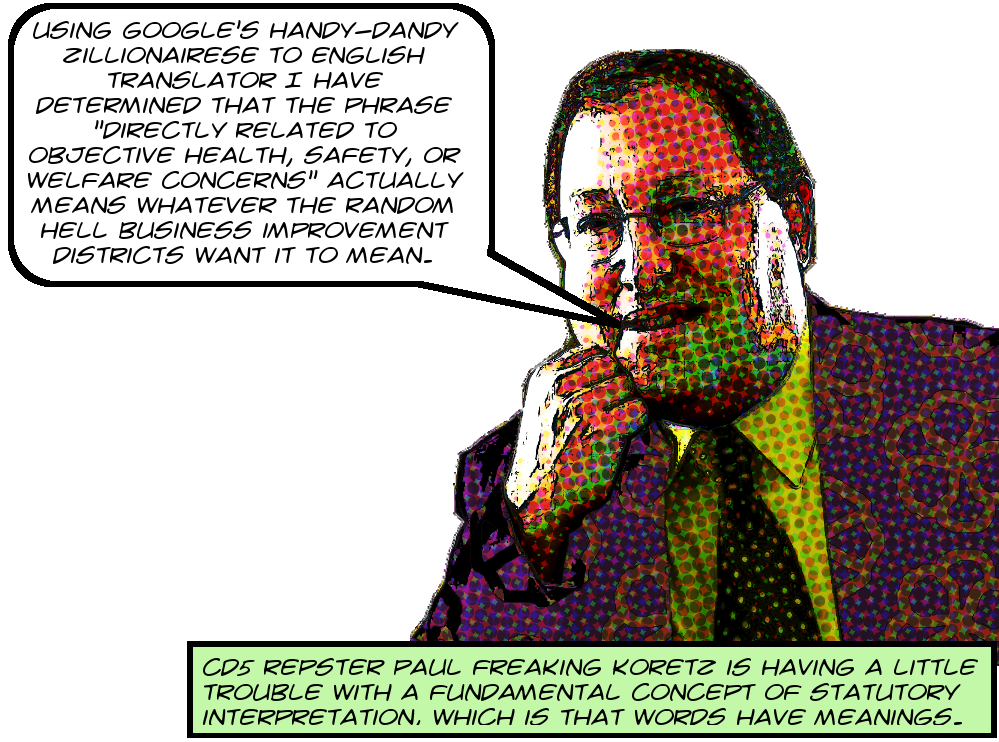 And thus it wasn’t really a surprise to hear renowned bigamist and CD9 repster Curren Price on the radio yesterday talking about how Council would be able to keep all the previously proposed no-vending zones and even add more and the only difference would be, according to super-genius Curren Price, that “now we’re going to have to base them on health, safety, and welfare concerns.”2 And turn the page to read all about the drastically deep dive into the crazy vat revealed by this one little stray comment!
END_OF_DOCUMENT_TOKEN_TO_BE_REPLACED 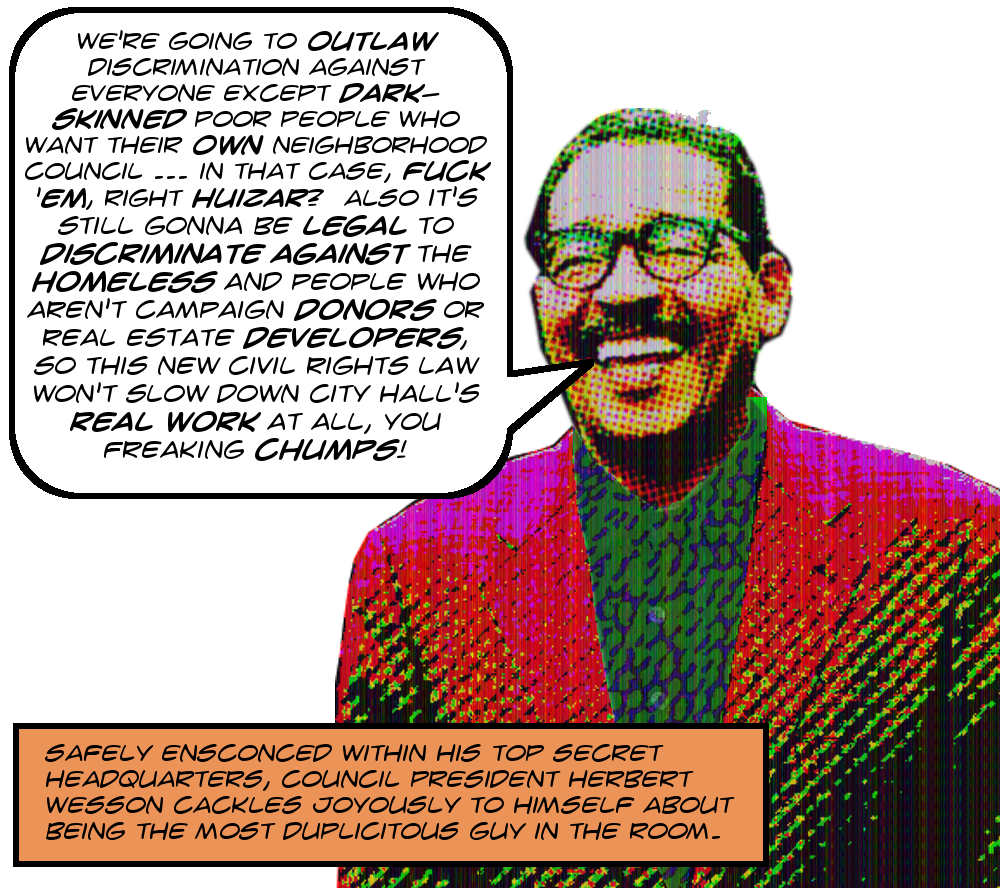 This is just a quick note to call attention to this motion, introduced in Council this morning by Herb Wesson, Gil Cedillo, and Nury Martinez (there’s a transcription of the PDF after the break). The motion, which has been assigned CF 18-0086, instructs the City Attorney with assistance from some other offices to draft a new civil rights law. The proposed law has two main parts.

First, it would prohibit “discrimination, prejudice, intolerance and bigotry that results in denial of equal treatment of any individual” and would do this by banning discrimination based on:

in the areas of

Second, it would establish a new commission, to be called the Civil and Human Rights Commission, which would enforce the law. Now, I am completely opposed to all these kinds of discrimination, and, as you might have guessed, I’m completely in favor of establishing any kind of new venue for me to complain about BIDs to.2 However, as is so often the case with our City Council, things are probably not exactly what they seem to be on the surface.
END_OF_DOCUMENT_TOKEN_TO_BE_REPLACED

So a couple weeks ago I wrote about an episode in November 2016 when Blair Besten, executive directrix of the good old Historic Core BID, at the behest of her Board of Directors, lobbied the City of Los Angeles about incentives for Skid Row development which included a seemingly endless list of wet fever dreams like no taxes ever, no height limits, no required affordable housing, and so on. Well, then someone posted my post to the Facebook asking, among other things, if Blair Besten’s lobbying was even legal. The post unleashed a deluge of stranger-danger visits to our cozy and haimish little blog and the usual slew of idiotic comments by the usual slew of unselfaware idiot commentators over on the Facebook itself.

Well, Mom had a favorite saying about wrestling with a pig, and that goes doubletime for arguing with the Facebook commentariat. So we all just ignored the whole mishegoss until, as will sometimes happen, it occurred to me that one of the most ignorant offensive mansplainy clueless wrong-headed imaginary-internet-lawyerly comments of all would provide a perfect foil for a post that I had been meaning to write for a while now anyway, and that’s how we ended up right here and now, friends.

The dimwitted commenter asked1 the OP: “What specific actions of hers do you think are of questionable legality?” This is one of them Internet comments that’s supposed to make the reader say something like “Hmmm…. now that I read that incisive question I can see that I really am a foolish dupe after all and the only reason I even had an opinion is because no very smart fellow ever challenged me… OK, I retract every idea I have ever had!!

However, as it happens, there are a number of ways in which Blair Besten’s specific action of lobbying the City on behalf of her employers with respect to development conditions on Skid Row violated various laws. For better or for worse, the discussion is unavoidably technical, and you gotta turn the page if you wanna read it!
END_OF_DOCUMENT_TOKEN_TO_BE_REPLACED