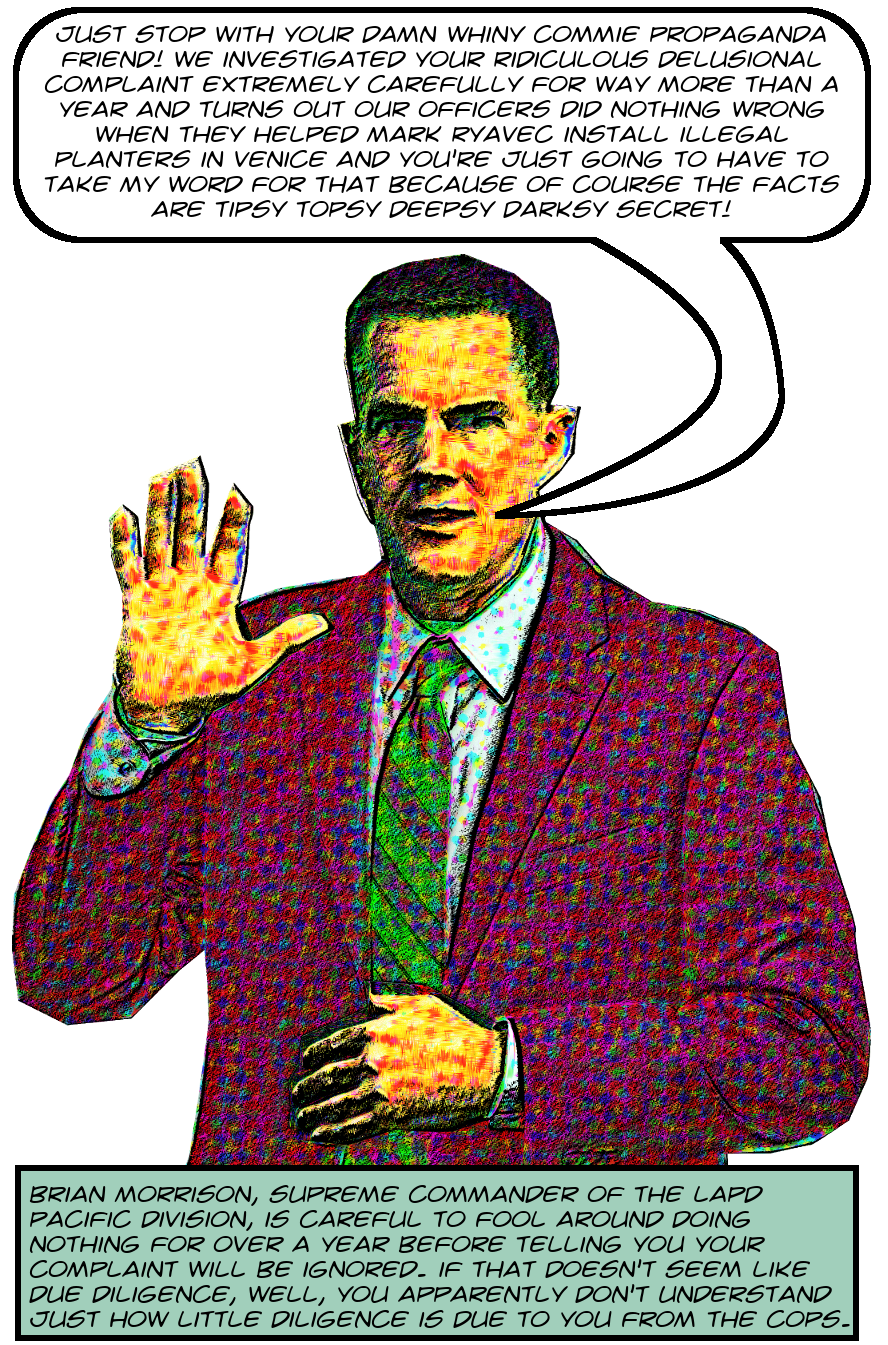 It’s strange in these apocalyptic times to remember that just last year anti-encampment planters, illegally placed on sidewalks in utter antisocial defiance of the law, were such a huge part of the City’s discussions about the rights of the unhoused. The planters were set up by psychopathic NIMBYs like Mark Ryavec, assisted by the LAPD, the Venice Neighborhood Council, and CD11 rep Mike Bonin, who lied about his office’s involvement until emails revealed the deep complicity of his former Venice field deputy Taylor Bazley.1

I ended up reporting Bazley to the Los Angeles Ethics Commission and a bunch of LAPD officers to Internal Affairs. I haven’t heard back about Bazley yet2 but last month I did hear back from LAPD about the officers I’d complained about. Here’s their response, also transcribed below. Can you imagine?! LAPD investigated themselves and discovered that they were innocent! We knew it would happen, and it did. What turns out to be slightly more interesting is my subsequent conversation with Paul Aeschliman, the officer who conducted the investigation,

I mean, I find it troubling that LAPD won’t release any information at all about their investigation. The most they ever do is release their finding. But if the officers are actually innocent, or not proved to be guilty, or whatever, it’s hard to imagine why anyone would want to keep the reasons for the finding secret. The only way to see that justice is being done is for it to be done in the open.3 Releasing the reasons for exoneration might prevent a lot of doubts about how well LAPD is able to police itself.

So I asked Aeschliman to tell me the reasons.4 And he refused, saying that “California Employment Law precludes us from releasing specific data.” I’ve been lied to and misled by enough government officials to be incredibly skeptical about any claim like this, so I asked him which laws in particular “precluded” LAPD from releasing the information.5 He told me:

There are multiple laws that cover employment in California including 832.5 PC and Section 6254 of the Public Record Act. I am not familiar with all of them since any decision to release any records is made by other sections like IAG, the Inspector General or Legal Affairs Division. All I can tell you is I am not allowed to release any other information on your complaint.

Getting actual citations is progress, to be sure! Because the next step, never ever to be skipped, is to look up the actual laws. The first one, §832.5 PC, simply states that unfounded complaints are to be considered personnel file material in the context of the California Public Records act although they are not to be kept in the officer’s personnel file:

Complaints by members of the public that are determined by the peace or custodial officer’s employing agency to be frivolous, as defined in Section 128.5 of the Code of Civil Procedure, or unfounded or exonerated, or any portion of a complaint that is determined to be frivolous, unfounded, or exonerated, shall not be maintained in that officer’s general personnel file. However, these complaints shall be retained in other, separate files that shall be deemed personnel records for purposes of the California Public Records Act (Chapter 3.5 (commencing with Section 6250) of Division 7 of Title 1 of the Government Code) and Section 1043 of the Evidence Code.

And Aeschliman’s other citation, to §6254 of the CPRA, is too vague to admit of a definitive interpretation but given 832.5 PC’s assertion that the investigations are personnel file material suggests that he’s referring to §6254(c), which covers personnel files:

[T]his chapter does not require the disclosure of any of the following records:

(c) Personnel, medical, or similar files, the disclosure of which would constitute an unwarranted invasion of personal privacy.

That last bit, about the “unwarranted invasion of personal privacy,” is essential. It means that personnel file material is not categorically exempt from release. It’s only exempt if the invasion of privacy its release creates is “unwarranted.” This must mean that sometimes the invasion of privacy is in fact warranted and in turn that means that before invoking this as an exemption it’s necessary for the agency to determine somehow whether or not the invasion is warranted. Also essential is the fact that with very few exceptions exemptions in the CPRA are at the discretion of the local agency. This is found at §6253(e), which states that:

Except as otherwise prohibited by law, a state or local agency may adopt requirements for itself that allow for faster, more efficient, or greater access to records than prescribed by the minimum standards set forth in this chapter.”

So unless there’s a law apart from the CPRA that specifically forbids the release of investigations of unfounded complaints then it’s at LAPD’s discretion to release them and they may be required to release them on a showing that whatever invasion of privacy might result from release is warranted, presumably by the public interest in seeing the documents. In any case, Aeschliman got sick of arguing about it with me and, with a typical bit of passive aggressive cop deflection told me that I “obviously don’t want to accept what [he was] saying.”

It was clear, though, that I did in fact accept what he was saying, which was that he didn’t know why he wouldn’t release the information, and was at this point merely asking him who would know. Another bit of passive aggression was Aeschliman’s advice that I go to the Police Commission to try to get the policy changed. This kind of suggestion, that someone go to the highest level and try to get the general policy changed, is an extremely popular deflection tactic, not just among police but among government officials generally.

It’s a way to avoid addressing the facts of the actual problem being discussed and possibly to divert the energy of citizens by getting them all wrapped up in interminable high level legislative battles. In any case, at this point it was clear that there was no advantage in hassling Aeschliman any more, so I took the question upstairs to Internal Affairs, from whom I have not yet heard back, but stay tuned in case I ever do!

Transcription of LAPD’s response to my May 10, 2019 complaint:

An investigation into your complaint that was reported on March 13, 2019, regarding the conduct of the Los Angeles Police Department, has been completed. The investigation has gone through several levels of review, including myself and the command staff of Internal Affairs Group. Your allegation that the Department assisted the residents of Venice in illegally placing planters on the sidewalk in violation of LAMC 56.11 and 56.12 has been classified as Unfounded, which means that based upon the preponderance of evidence standard, the investigation determined that the act alleged did not occur in the manner you described.

Thank you for bringing this matter to our attention. It is the goal of the Los Angeles Police Department to provide the highest level of quality service to every member of the community. Should you have any questions concerning this matter, please contact Sergeant Paul Aeschliman, Pacific Community Police Station, at (310) 482-6310.

Image of Supreme LAPD Pacific Division Commander Brian Morrison is ©2020 MichaelKohlhaas.Org and once upon a time there was this Flickr biz!