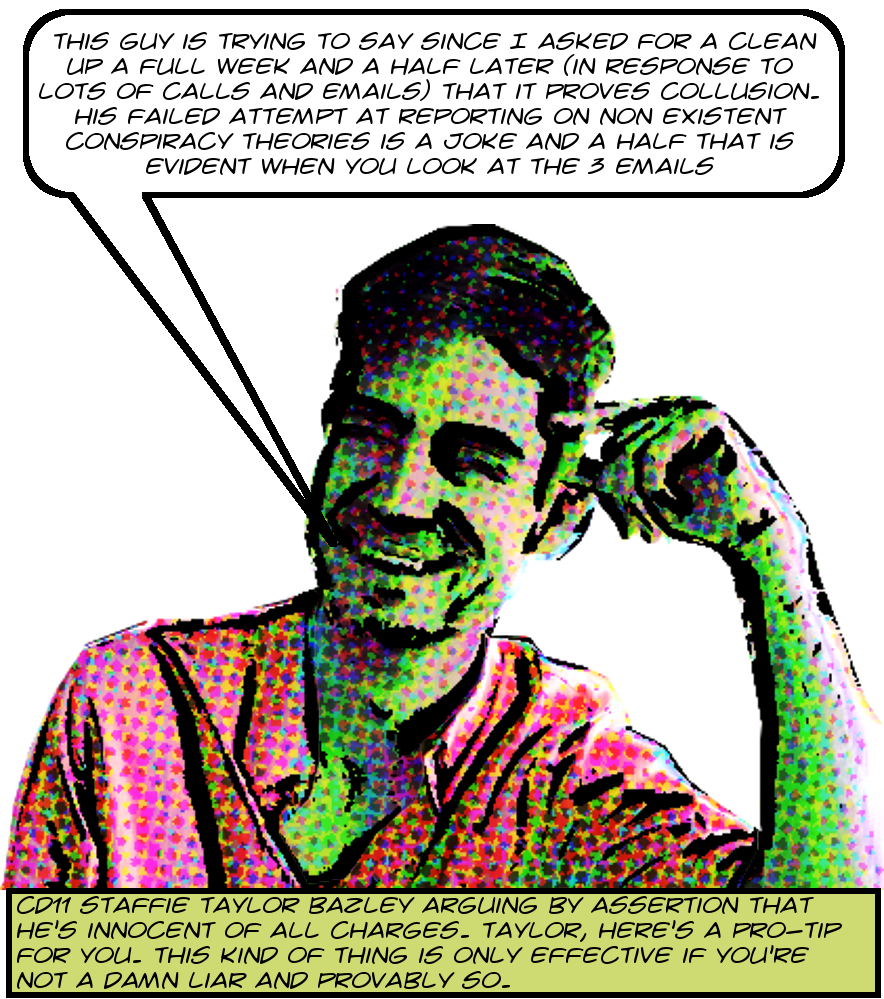 Quick update time! Psychopathic homeless-hating housedwellers in Venice have been illegally dropping anti-encampment planters all over the damn place. I obtained some emails via the California Public Records Act that proved that Mark Ryavec, Carlos Torres and assorted other members of their fashy little beerhall fight clubs, the Venice Stakeholders Association and Venice United, were behind the planters with the avid assistance of a bunch of LAPD cops and Taylor Bazley, who is Mike Bonin‘s field deputy for Venice.

Then I turned all the cops in to LAPD Internal Affairs since cops are supposed to enforce the law rather than help a bunch of zillionaires violate the law. But that move, as satisfying as it was, left smarmy little creepy little avid little licker of the dung-encrusted boots of zillionaires Taylor Bazley unreported anywhere for anything to do with his part in the ongoing civic tragedy that is the connivance of our City officials with these illegal planter-placers. Which is a gap in the cosmic order that could not allowed to remain!

And thus, this very morning, I filed a complaint against Bazley with the Los Angeles Ethics Commission. The facts are the same as in the above-mentioned complaint against the cops, but the violations alleged are different because Bazley, at least as far as we know, is not a cop, so he has fewer restrictions on his relations with lawbreaking.

City officials, agency employees, … shall not misuse or attempt to misuse their positions … to create or attempt to create a private advantage or disadvantage, financial or otherwise, for any person.

The general theory is that Mark Ryavec, Carlos Torres, and the rest of their planter-placing buddies, really value the placing of the planters. To be able to place them is an advantage.

And the public has an essentially insurmountable interest in having City officials who obey the law. Thus when City officials violate the law or help others to violate it they’re acting contrary to the public interest. Thus there’s no public advantage created by Bazley’s work, so the advantage to Ryavec, Torres, and friends is a private advantage.

And not only that, but whatever Taylor Bazley’s job description might be, it certainly does not include facilitating violations of the Los Angeles Municipal Code. Thus if he wields the vast civic power with which he’s been entrusted in order to help Ryavec, Torres, and a bunch of other psychopaths break the law, he’s misusing his position.

And those are the elements that have to be established to show that Bazley violated LAMC §49.5.5(A). The Ethics Commission is the body that enforces this statute, which is why I sent that complaint to them. And now we just wait and wait and wait to see if anything happens.

And it takes a long time, but that doesn’t mean that nothing happens. Why, once upon a time something even happened with one of my complaints! I turned in this cop named Eddie Guerra for what appeared to be a $400 shakedown of the Hollywood Media District BID in exchange for his rousting some homeless people at their request. The Ethics Commission evidently passed it to the LAPD, who took two freaking years to decide that at least counseling was warranted!

And even when I don’t hear back about a complaint, well, Commission director Heather Holt once told uberlobbyist Bill Delvac, who evidently files complaints against his competitors on a regular basis, that just because nothing happens publicly doesn’t mean that nothing happens. And if nothing happens even behind the scenes, well at least I got a blog post out of it and you and I got to spend this lovely time together!