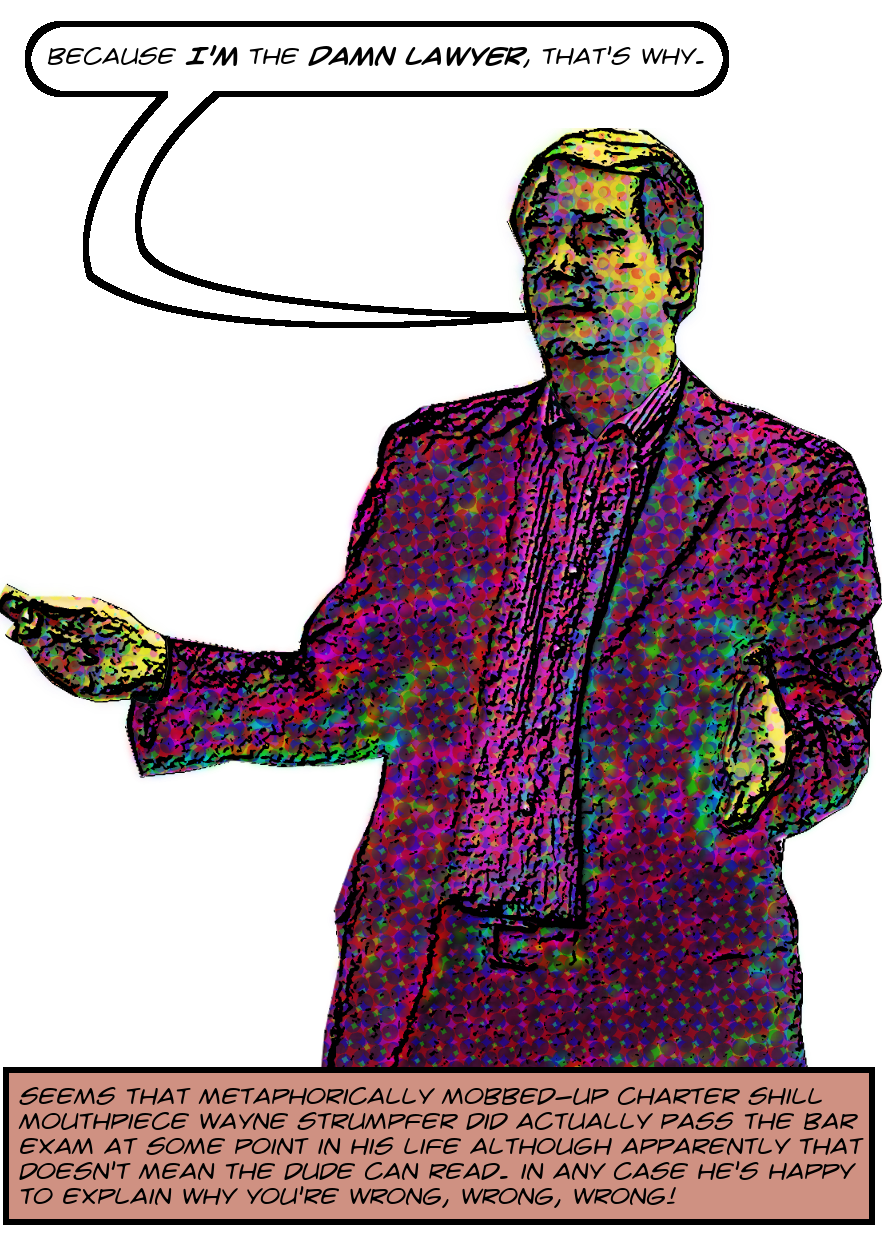 The Brown Act, California’s open meetings law, imposes a long list of requirements on local government agencies and among these are a duty to send copies of meeting agendas to members of the public who request this service.1 Both I and heroic public education activist Hilda Rodriguez-Guzman have asked this of that local white savior charter conspiracy known as The Accelerated Schools (“TAS”).

And on June 16, 2020 the TAS Board’s Finance Committee held a meeting2 but notified neither Hilda nor me in advance. A couple days later I sent an inquiry via email to Wayne Strumpfer, one of TAS’s many lawyers,3 this one in particular of counsel4 to California charter school law powerhouse Young Minney Corr, basically asking “hey friends, what the freaking heck?!”

And five days later, certainly long enough so that we can discount impulsivity as an explanation, Strumpfer sent me his response. In this remarkably idiotic document Strumpfer argues that while the Brown Act may indeed require agencies to send copies of Board agendas to members of the public it imposes no such requirement with respect to committee meetings. In particular, thus spake Strumpfer: “This code section relates to any meeting of a legislative body — i.e., The Accelerated Schools Board. There is nothing in the code section that mentions committee meetings.”

Which is an interesting statement. Strumpfer is correct in the sense that the word “committee” does not appear in the Brown Act at §54954.1. But he’s about as wrong as can be when he equates “legislative bodies” with “The Accelerated Schools Board.” The term “legislative body” is a term of art in the Brown Act. Whatever it may mean in a naive sense is overridden by the law’s extensive definition, found at §54952(b), which states in part that:

In other words, committees are legislative bodies. Therefore the Brown Act requires TAS to send copies of committee agendas to members of the public who so request. Also TAS violated the Brown Act by not sending agendas for the June 16, 2020 meeting of the Finance Committee. And Wayne Strumpfer, despite the big bucks he’s paid, apparently didn’t bother to read the law before advising his clients on a course of action.5

One of the tragic aspects of the Brown Act, though, is that essentially the only way its enforced is via litigation. And while county district attorneys have standing to file such suits, at least here in Los Angeles County they rarely if ever do. But private citizens also have standing to challenge violations. According to §54960.2 such a suit must be preceded by a demand letter giving the local agency a chance to “unconditionally commit” not to violate the law in the specified manner ever again.6

I send these letters out from time to time when an agency violates the law egregiously enough. The last one I sent was in December 2019, also to TAS, which did at that time7 capitulate to my demand and unconditionally agree not to violate the law in the specified manner ever again. But that violation was very different from the current one. These shenanigans with the Finance Committee don’t violate their earlier unconditional commitment.

And thus another demand letter is in order, which is why I sent one this morning via email to Strumpfer and TAS Supreme Commander Dr. Grace Lee Chang.8 A transcription follows and now we wait to see whether they capitulate!

Via email only per agreement

I am writing to you to demand that The Accelerated Schools (“TAS”) cease and desist from violating the Brown Act as described below and to request that, in order to avoid costly and unnecessary litigation, you respond per the Brown Act at California Government Code §54960.2 with an unconditional commitment to so cease and desist.1

1. Charter schools in California are private entities made subject to the Brown Act by state law and, for those authorised by the Los Angeles Unified School District, by the terms of their charter. See the California Education Code at §47604.1(b)(1).

2  Violation of the Brown Act in relation to the June 16, 2020 TAS Finance Committee meeting

3. Neither Hilda Guzman nor I received either notice, agenda, or packet for TAS’s June 16, 2020 meeting of its Finance Committee.

4. In response to my inquiry TAS’s attorney, Wayne Strumpfer, told me that TAS was not required to notify the public of committee meetings nor to provide copies of their agendas to members of the public who requested them.

5. The Brown Act at §54954.1 states that “[a]ny person may request that a copy of the agenda, or a copy of all the documents constituting the agenda packet, of any meeting of a legislative body be mailed to that person.”

A commission, committee, board, or other body of a local agency, whether permanent or temporary, decisionmaking or advisory, created by charter, ordinance, resolution, or formal action of a legislative body … [including] standing committees of a legislative body, irrespective of their composition, which have a continuing subject matter jurisdiction …

8. TAS’s Finance Committee, being a “standing committee” with “a continuing subject matter jurisdiction,” is a legislative body within the meaning of the Brown Act.

10. TAS violated the Brown Act by failing to mail the agenda to me and to Hilda Guzman.

11. This violation is not just incidental, technical, nor harmless. Rather, it implicates fundamental constitutional rights that the people of California have reserved to themselves. The Brown Act at §54950 states:

In enacting this chapter, the Legislature finds and declares that the public commissions, boards and councils and the other public agencies in this State exist to aid in the conduct of the people’s business. It is the intent of the law that their actions be taken openly and that their deliberations be conducted openly.

12. By refusing to mail committee agendas to members of the public who request them TAS fundamentally undermines the ability of the people of California to retain control over TAS.

13. The Accelerated School’s failure to comply with the requirements of the Brown Act constitute a grave betrayal of both fundamental and consequential principles of our government. It is therefore in the best interest of all concerned that the school not only
cease and desist from such violations in the future but that they make a public commitment to ceasing and desisting.

14. If The Accelerated Schools responds to this demand within 30 days of today’s date with a letter expressing an unconditional commitment to cease and desist from all future violations of this type in substantially the form given by the Brown Act at §54960.2(c) I will consider this matter at an end. Please send this letter to me by email at ▪▪▪▪▪@▪▪▪▪▪.org and by postal mail at:

15. If The Accelerated Schools refuses to so respond or so responds after 30 days have passed I will instruct my attorneys to proceed to “file an action to determine the applicability of this chapter to [the above-described] past actions” under §54960.2 of the Brown Act. If I prevail in that action the Brown Act at §54960.5 allows for the court to award costs and reasonable attorneys’ fees to me.

1
Please note that all citations to the Brown Act in this document are to the California Government Code.

Image of Dr. Wayne Strumpfer, the finest legal mind of his generation, is ©2020 MichaelKohlhaas.Org and if it’s the last thing you do, don’t click this damn link!

One thought on “The Latest Episode In My Sporadic Brown Act Demand Letter Project! — The White Savior Charter Conspiracy Known As The Accelerated Schools — Hired A Self-Proclaimed Lawyer — Name Of Wayne Strumpfer — Who Apparently Never Learned In Law School That You Gotta Read The Damn Statute Before You Go Advising Your Clients On A Course Of Action — But Fortunately For All — Even Though I Never Went To Law School — I Do In Fact Know How And When To Read — So When Strumpfer Says Something Super-Crazy Like That The Brown Act Doesn’t Apply To Committees — Here I Am To Save The Doggone Day — With Yet Another Brown Act Demand Letter — Read It Here!”