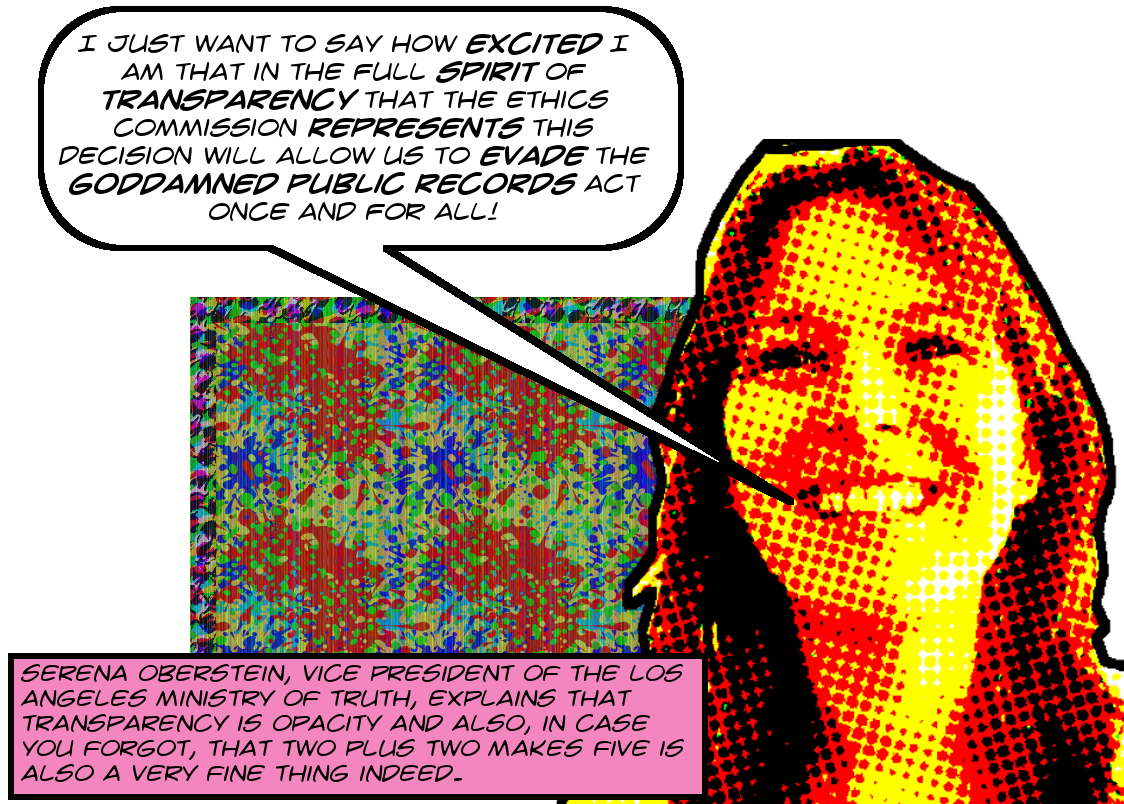 The Los Angeles Ethics Commission held its December meeting this morning, and I recorded the whole thing1 and you can watch it either on YouTube or else on Archive.Org. Of course the main event was the last two items to be discussed regarding proposed updates to the Municipal Lobbying Ordinance, and I’ll have something to say about that whole mishegaas later in the week I hope. And there was also an instance of silence speaking louder than words, as the Commission completely ignored my recent request that they consider adopting a disclosure rule for ex parte contacts between Commissioners and those who would influence them.

Such contacts, of course, are a serious problem with our Ethics Commissioners, not least Serena Oberstein, the lobbyists’ best friend, who was involved in a minor yet horrifying interlude at this morning’s meeting which is the subject of tonight’s rant. The issue was whether and how the Ethics Commission’s investigators should disclose to the targets of their investigations that the investigations have become inactive.

This came up at the October meeting, and you can watch the whole episode here if you’re interested. The short version is that the investigators presently do not inform investigative targets when they’ve stopped investigating due to confidentiality mandated by the City Charter. Commissioner Serena Oberstein is deeply concerned that all these targets are going to be unsettled and anxious by not knowing that they’re not being actively investigated and she wanted staff to issue closure letters.

Such letters turned out not to be legally or politically possible, but at today’s meeting Sergio Perez, Director of Investigations, presented this proposal, adopted unanimously by the Commission, which recommended that policy be changed to allow oral notice to those being investigated that their investigations had become inactive. This recommendation putatively avoids the confidentiality requirement by invoking LAAC §24.29(c)(2), which states that:

Records and information may be disclosed to a respondent, an individual designated in writing by a respondent as the respondent’s counsel or representative, a witness, a court, a prosecution or law enforcement agency, or otherwise as necessary to conduct an investigation

Their argument seems to be that telling a respondent that an investigation is inactive is necessary to conduct the investigation. Obviously this is a purely ad hoc load of crap, but it gets worse. When Sergio Perez read this recommendation, after essentially having been bullied into it against his better judgement by Serena Oberstein, all of whose petits amis in the so-called “regulated community” will now, thanks to her, have their anxiety orally relieved in such a way that no one else will ever know because nothing’s written down, so no record is created, Commissioner Oberstein was just not able to contain her illicit pleasure at this coup and, practically quivering in her slithy joy, burst forth with the following nonsense:

I just wanna say how excited I was to see this on the agenda. You know, after the numerous conversations that we have had and in the spirit of transparency that the Ethics Commission represents I think that people will be very very appreciative. I think that a verbal notice keeps us from having to do … from having to [unintelligible] with the Public Records Act.

That’s right! You read it here first, friends! An actual sitting Ethics Commissioner is excited about having come up with a way to provide information selectively to some members of the public in such a way that the public records act is evaded so that no other interested parties must be told. They’ve consciously directed the staff not to write anything down so that they don’t have to disclose it. And to make matters even more stupidly Orwellian, Serena Oberstein claims that they’re implementing this policy “…in the spirit of transparency that the Ethics Commission represents…” It’s astonishing, the kind of self-contradictory nonsense that comes out of people’s mouths just because they can get away with it, is it not?

This whole episode, as trivial in many ways as it might be, is just another example of how far our once-proud3 Ethics Commission has sunk into the slough of despicability. Serena Oberstein is all jeansy-creamsy about thinking of a way to ease the suffering of her lobbyist buddies, law, decency, and the constitution of California be damned. Her colleagues on the Commission are happy to vote yes on any manner of nonsense, which, at least Araceli Campos and Melinda Murray, the two most moronic of the bunch, may not even have read.

The City Charter pretty effectively prevents the City Council and the Mayor from interfering with the operations of the Ethics Commission staff but, evidently, the fact that Council and Mayor appoint the goddamned commissioners is a bigger loophole than anyone thought it would be. What we need, evidently, is a change to the Charter providing for direct election of Ethics Commissioners, otherwise the day will come when they’ll be up there on the dais voting on the divinity of Eric Garcetti. Speaking of which, I gotta sign off now, go sacrifice a sheep to Eric Garcetti and pour out a libation on the grave of Tom Bradley, maybe get that damned sidewalk out front repaired or some potholes filled!

Image of Ministry of Truth Commissioner Serena Z. Oberstein is not only ©2017 MichaelKohlhaas.Org, but it’s also based loosely on this little item here.