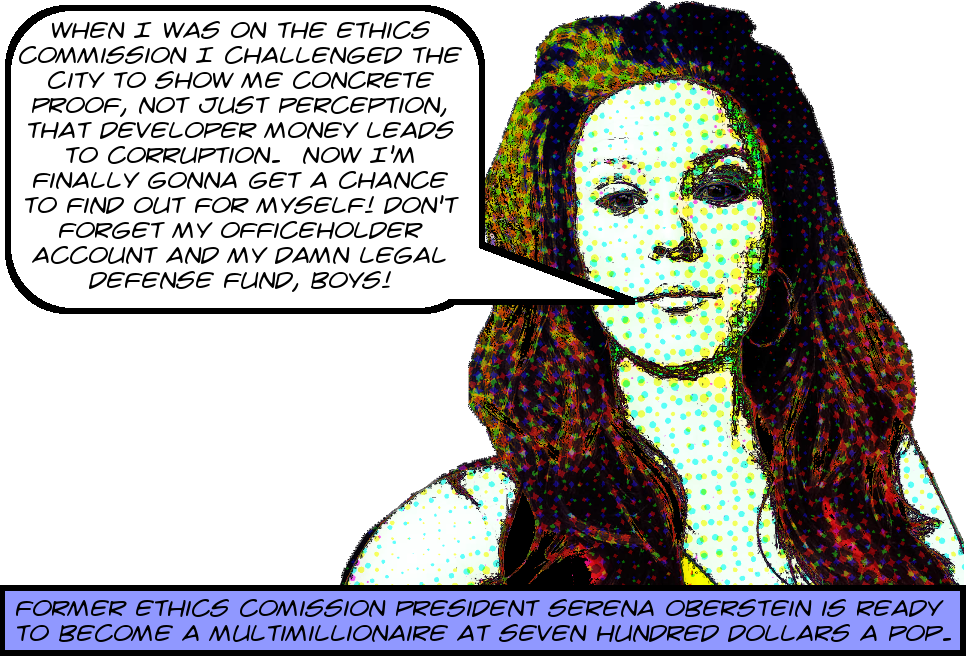 A campaign opposing Serena Oberstein’s candidacy because she’s Jewish and a woman and a mother seeking power rather than because she’s a corrupt politician is intrinsically damaging and is unsupportable by sane people. That’s surely no reason to vote for Serena Oberstein, but it’s certainly a reason not to vote for Brad Smith. And as I said, turn the page for a transcription of the email.

On an unrelated matter but VERY IMPORTANT: I want you to think of people in your biz and circles who will help ($$$) my candidate in the special election. We’re up against a YOUNG JEWISH FEMALE with political connections up the wazoo and a husband who is a longtime political hack here. She was “anointed” to continue the reign by the NW Valley Mafia that’s ruled the roost since the mid-’60s. As a matter of fact—she was appointed to the L.A. “Ethics” Commission by the absolute sleaze who’s leaving early to work for LiesWeekly/LiesWeakly. She’s in the pockets of developers, and because she ain’t too bright despite her degrees—she got taken to the woodshed (in a respectful way) in an LAT Editorial, after a news article on the subject:

“Oberstein also questioned whether there was “concrete proof” that campaign money from developers leads to corruption at City Hall. And she cited concerns from Ethics Commission staffers, who had warned that figuring out who should be targeted by such a ban would be complicated.”

Ethics commissioners said they were skeptical of the proposed ban, questioning whether it would be legal (courts have equated political contributions with speech), effective or even necessary. Commission President Serena Oberstein said that she wanted to see “concrete proof, not just perception, that developer money leads to corruption.”

The problem is that perception matters in politics. The exchange of money between the people seeking city approval and the people granting it creates the appearance of a quid pro quo. It fuels suspicion that the system is rigged. The ban on developer contributions takes the question of impropriety off the table, and — ideally — allows for a more reasonable discussion of how and where to build more homes to address the city’s housing crisis.

Oh, and as a mother of a 2-year-old, she prioritizes POWER in campaigning to be a member of the city council over dedicating 100% of her time and effort to the most critical time in a a child’s development. One need not be a parent to understand this. Call me a sexist pig, but I personally find this to be revolting. One need not be a parent in the ’50s to get this. A lust for power with a 2-year-old kid. When one runs for elective office, not only are you in a fishbowl—everything is on the table. Even in my race long ago, I know for a fact (because a friend’s father told me)—that he got one of those “push-polls” about me. Making stuff up and then asking the respondents if what they “learned” made them more or less likely to vote for me in the general election. I guess my “war chest” of $14K scared the bejesus of Boland and the $385K she spent to defeat me.

Anyway, the concept of running with a 2-year-old and that critical time should be part and parcel of the discussion in my view.

Oh, and if you recall the devastating Steve Lopez columns on all those ex-parte communications at the CA Coastal Commission involving lobbyists representing development clients? This “Mother of the Year” committed the same exact thing…15 minutes before she, the PRESIDENT of the L.A. Ethics Commission commenced a hearing:

We need to raise a half million; she will raise a million. We have by far the best and most qualified candidate (with experience around the track), but in order to WIN, we need every dollar we can. And we are not taking ANY $ from developers or their whores…excuse me…lobbyists….er “land-use consultants” because we believe that it is responsible and efficacious to come to the council with CLEAN HANDS so as to be fair judges of which projects merit approval (in our district and in the 14 other councilmanic districts) and which ones deserve a Thumbsdown.

So please think of people who care about L.A. and want to help. This guy is the epitome of the All-American story. Native of the district, Navy Vet and aerospace (which means he’s been subjected to TOP SECRET CLEARANCE and he is no Kavanaugh) and degreed. The longtime, corrupt L.A. Political Establishment is already making their big, big bets—on HER. I KNOW THIS AS FACT. We’ll accept contributions from everywhere, no matter where they live.

The big problem is the time we are living in directly correlates to the dearth of women on the L.A. City Council. There are now two, but one’s been subpoenaed to a Grand Jury, so it’s looking like it might eventually drop down to one. Having a vagina anywhere in America now is the “new” Affirmative Action. Even if you are unethical, not too bright, were president of the ETHICS COMMISSION, and put the possible ascent to power over everything. God, Hillary Clinton would never have left Chelsea at age 2 to run for office and she was in high demand in the mid-’80s.