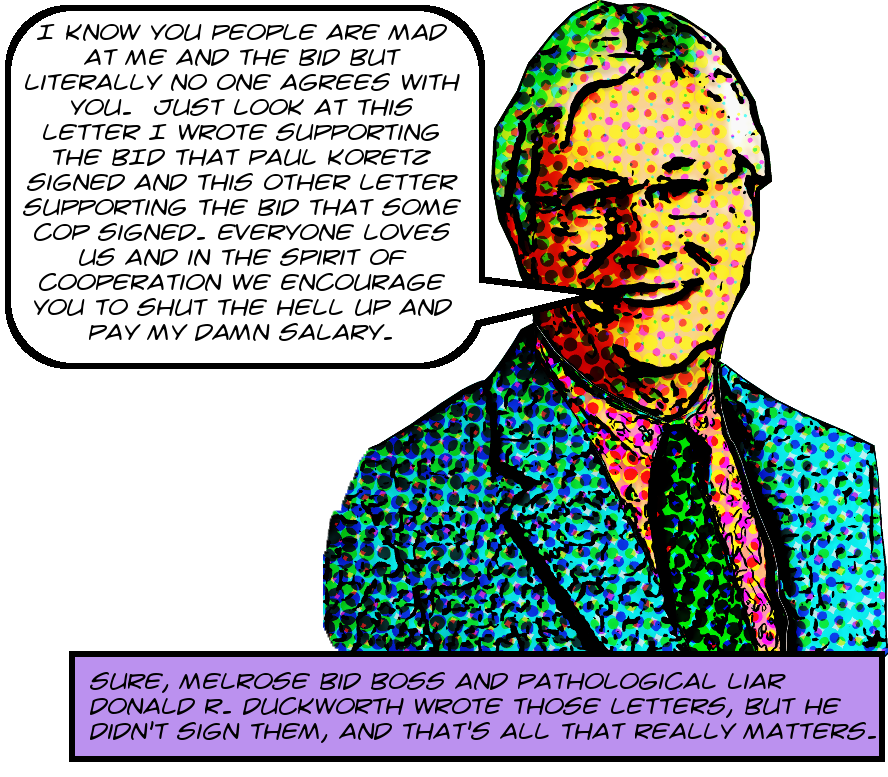 I know my readers eagerly await, nay, hunger, crave even, more news about Donald R. Duckworth,1 the Melrose BID‘s hatchet-faced goblin2 of an executive director. But you will recall that El Duckie essentially shut down my CPRA requests recently, to the point where I had to literally sue the literal freaking pants off the guy. And he knew he done wrong, so his BIDdie employers had to pay beaucoup de bucks for the error of his ways.

And because I am basically a naive optimistic believer in the good faith, honesty, and sense of fair play of my fellow human beings, I neglected to pin down this sclerotic old crow3 in the settlement with a CPRA response time-table. Which is why, even after his principals had to pay $13K to settle up his misdeeds, did he start right in again with his CPRA-flouting ways. Thus it was only yesterday, five months after I first made the request,4 that I finally received a significant stack of goodies from the Melrose BID.5 And thus the mockery of Donald R. Duckworth can finally recommence!

Now, back in January of last year, the Melrose BID was beginning its renewal process. And as part of the process, El Duckie was putting together a brochure to convince property owners to sign renewal petitions. And as part of the brochure assembly process Donald Duckworth solicited a letter of support from CD5 repster Paul Koretz and another letter from LAPD Wilshire Division CO Anthony Oddo. But he didn’t just solicit letters from these worthies, he actually wrote the letters for them.6

And, you know, I understand that this isn’t sketchy in and of itself, and it happens even in much more consequential circumstances. E.g. lawyers often submit proposed orders to judges, who have the option of signing them, editing them, or ignoring them. But cast your mind back to the golden days of last summer, when the Melrose BID was in open revolt against all manner of Duckwortharian shenanigans, like paying himself a damn fortune to do pretty much nothing, and spending $10K per month on the BID’s hilariously self-parodying blog, and so on.

And hostile anti-BID letters were flying this way, that way, and yonder way! Anat Escher wrote a letter! And Laura Aflalo wrote a letter! And Richard Jebejian wrote a letter! And this was all while the BIDdies were trying to collect enough petitions to move the renewal process to the next phase! And man, were they ever worried! About the petitions, that is, cause if these rebels had their way, the BID might not even be renewed!

But really he himself wrote all the love letters to the BID. So basically the whole thing was a really vigorous conversation between Donald Duckworth and his stable of sockpuppets! And at the end of it Melrose Avenue had their damn BID renewed for another ten years! Anyway, turn the page for some excerpts from this pernicious sockpuppetry and some metadata showing that El Duckie really did write everything!

On January 29, 2018 Duckworth emailed Koretz staffer Robert Oliver, attaching a draft letter in MS Word format of a letter of support for the BID from Paul Koretz. Here’s a PDF copy, which is easier to read in many cases, but the MS Word document is essential. Just take a look at the metadata!

And man! Just look how much Duckworth loves Duckworth when he’s writing for Koretz!

Over the past four (4) years we have been very fortunate to have the Melrose Business Improvement District (“Melrose BID”) performing services along Melrose Avenue for the benefit of the commercial properties located within its boundaries. These services have attracted customers to the area and have helped to revitalize its business stakeholders. We have learned that by working together tremendous positive results can be achieved. There is, however, still much more to be done. That is the reason I’m writing to support the renewal of the Melrose BID and urge you to do so as well.

Here’s the letter on CD5 letterhead and signed by Koretz! And that same day El Duckie emailed Inga Wecker, who is or was apparently SLO for that area and sent her a MS Word letter from her boss Anthony Oddo, written by El Duckie, as the below metadata show, and here’s a PDF of it on LAPD stationery. And for that characteristically weirdo Duckworthian plot twist, don’t forget to notice that The Duckworthie misspelled Anthony Oddo’s name. Way to curry favor, Duckie!

And man! Just look how much Duckworth loves Duckworth when he’s writing for Oddo!

LAPD Wilshire Division has been very fortunate to have the Melrose Business Improvement District (“Melrose BID”) and its Security Ambassador Program to support its “protect and serve” mission along Melrose Avenue between Fairfax and Highland. In my opinion, these Melrose BID services have enhanced the safety enjoyed by commercial properties located within its boundaries. Working together we have achieved positive results. The work, however, goes on. That is the reason I’m writing to support the renewal of the Melrose BID and urge you to do so
as well.

And here’s a copy of Oddo’s letter on LAPD stationery! And then by June 2018 when, as I said above, the BID’s property owners were in open rebellion and Donnie Duckie was getting frantic about BID renewal and his very, very, very, very easy and very well-paid position, he send this email to the secret BID leadership cabal with a bunch of draft responses to the rebels, including one in MS Word format written, according to the metadata by, you guessed it! Mr. Don Duckworth!

And just ten days later this remarkable document had morphed into an even more remarkable four page letter to the BID’s property owners signed, you can see, by BID Board President Deny Weintraub actually written by El Duckworth, possibly with help from his co-conspirators. And man! Did Weintraub/Duckworth drag them what dragged themselves! And did they ever rely on those letters from Oddo and Koretz! The ones written by Duckworth! Who also wrote the letter by Weintraub!

Current Melrose BID Security Ambassador Services have earned high praise from LAPD’s Commanding Officer and sworn officers. See the attached letter from LAPD Wilshire Division Commanding Officer Anthony Oddo.
…
We also encourage you to reach out to Councilman Koretz’s Office to see if they deem the Melrose BID as a net benefit for the area. As reflected in the attached letter from the City Council Member, we believe they will also confirm that the Melrose BID has been an extremely effective advocate for the District and its property owners.

And that’s the story of how Duckworth wrote a bunch of letters that Duckworth cited in another letter that Duckworth wrote to protect Duckworth’s job! And thereby cultivated and maintained the illusion of widespread support, which then kind of came true. Just another day in BIDlandia. And there’s some other interesting stuff in this (small) release, so take a look over here on Archive.Org if you’re interested. And stay tuned for a number of other stories which will come to light from this latest batch of Duckworthiana!

Image of BIDdological freak show specimen Donald R. Duckworth is ©2019 MichaelKohlhaas.Org and is you know lookie there!